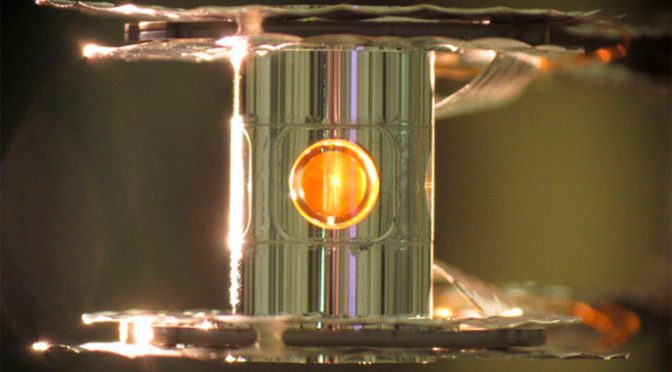 As absurd as their position is in the eyes of the awakened world, Federal Scientists are claiming to have been inching closer to replicable and practical cold fusion device, i.e. a nuclear fusion device that gives more energy out than in. Cold fusion is the replication of a star using earthly materials and parameters.

A team of scientists in California announced Wednesday they are one step closer to developing the almost mythical pollution-free, controlled fusion-energy reaction, though the goal of full “ignition” is still far off.

Researchers at the federally-funded Lawrence Livermore National Laboratory revealed in a study released Wednesday in the peer-reviewed journal Nature that, for the first time, one of their experiments has yielded more energy out of fusion than was used in the fuel that created the reaction.
In a 10-story building the size of three football fields, the Livermore scientists “used 192 lasers to compress a pellet of fuel and generate a reaction in which more energy came out of the fuel core than went into it,” wrote the Washington Post. “Ignition” would mean more energy was produced than was used in the entire process.
“We’re closer than anyone’s gotten before,” said Omar Hurricane, a physicist at Livermore and lead author of the study. “It does show there’s promise.”
The process ultimately mimics the processes in the core of a star inside the laboratory’s hardware. Nuclear fusion, which is how the sun is heated, creates energy when atomic nuclei fuse and form a larger atom.
“This isn’t like building a bridge,” Hurricane told USA Today in an interview. “This is an exceedingly hard problem. You’re basically trying to produce a star, on a small scale, here on Earth.”
A fusion reactor would operate on a common form of hydrogen found in sea water and create minimal nuclear waste while not being nearly as volatile as a traditional nuclear-fission reactor. Fission, used in nuclear power plants, works by splitting atoms.
Hurricane said he does not know how long it will take to reach that point, where fusion is a viable energy source.
continue reading »
An extensive discussions of practical devices using Cold Fusion technology are available here.
As an aside, Marko Rodin’s toroidal experience has been featured at TEDx through exhausted volunteers like Randy Powell.

THE RODIN COIL: THE GREATEST DISCOVERY OF ALL TIME?

In what might be the greatest discovery of all time, Marko Rodin has figured out how to 3-dimensionally model the mathematical language of nature.  As student of Marko Rodin Randy Powell says in his Ted Talk in 2010, “They say mathematics is the language of god, but until now nobody has been speaking god’s language”.
ARVE Error: need id and provider
Some of the practical implications of this technology are said to be:

continue reading »
Keshe also promised us to release his discovery within the year.
–
Please support us by downloading our Second Edition of Towards Healthcare Emancipation eBook. The proceeds from this book will be used to fund our next project, Towards Energy Emancipation.
The aim is to make the subject of free energy more understandable for the layman so that anybody could replicate and install his own power plant and be completely living off-grid.
If you haven’t done so, please like our FB page to encourage others to learn more about our work.
Thank you very much for your valuable support.
–