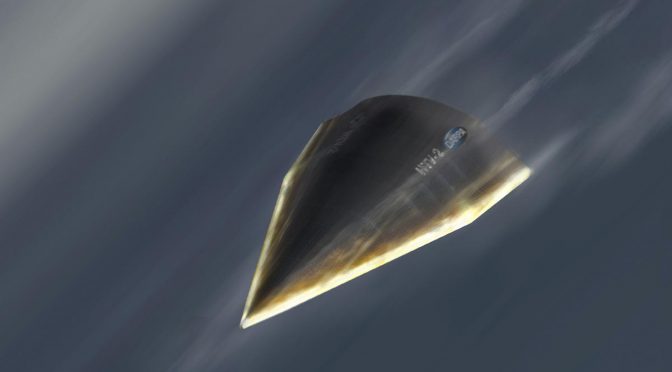 China on Wednesday confirmed that it carried out a third flight test of a new hypersonic strike vehicle that U.S. officials say is part of efforts by Chinese nuclear forces to penetrate U.S. strategic missile defenses.
A Chinese Defense Ministry spokesman told state-run news media the Dec. 2 test was routine.

“Scientific experiments carried out by China within its borders are normal ones conducted according to its schedule, and they are not directed against any specific country or target,” the Defense Ministry stated through a spokesman. The comments were reported in the official China Daily newspaper.
The official confirmation is unusual because China’s military development programs, and specifically its nuclear arms, are shrouded in secrecy.
The Ministry comment was made in response to the Free Beacon’s disclosure Dec. 4 that China had conducted a third flight test of the maneuvering high-speed hypersonic glide vehicle called the Wu-14. The test was carried out in western China.
Defense officials said the test was the third by China of the new ultra-high speed vehicle. Two earlier tests were monitored by U.S. intelligence agencies on Jan. 9 and Aug. 7.
The third test of the advanced weapon in a single year is an indication of the high priority China has placed on building the weapon, military analysts said.
John Tkacik, a former State Department China affairs specialist, said the Wu-14 development is one reason the Pentagon increasingly has expressed anxieties over Chinese weapons development in public.
“Clearly, hypersonic reentry vehicles are intended eventually to deliver nuclear weapons to a target,” Tkacik said. “And clearly, China is modernizing its nuclear weapon systems far more extensively than Washington policymakers have been willing to believe.”
Tkacik noted that the Wu-14 program comes “at a time when America’s nuclear weapons infrastructure, from Air Force delivery systems launch units down through the industrial base, is attriting its expertise, its scientists, its manufacturing capacity, its military morale.” By contrast, “China has upped the ante and is betting all in,” he said.
Mark Stokes, a retired Air Force officer and former Pentagon China specialist, the latest test indicated “the People’s Liberation Army—presumably the Second Artillery Force—and the space and missile industry have been carrying out engineering design work on a boosted hypersonic glide vehicle for quite some time.”
“Certification of the design requires prototype testing of the post boost vehicle,” he said.
Tkacik said hypersonic strike vehicles are designed to reduce warning time of an attack to zero so that “the target never knows what hit it, nor does an anti-ballistic missile system have the time to plot a track before it’s hit.”
“Unlike the U.S. which can’t build a nuclear warhead any more, China’s drive for a hypersonic capacity centers on nuclear weapons delivery,” Tkacik said. “But this is a reality that no one in Washington can quite allow himself to believe.”
The Wu-14 is launched atop a ballistic missile, travels to near-space, and then re-enters the atmosphere and glided to its target. It travels at speeds of up to Mach 10, or 10 times the speed of sound, around 7,680 miles per hour.
Operating a weapon at such speeds is difficult because of the stress on materials and the difficulty of controlling the vehicle.
U.S. officials have said the Wu-14 is being developed primarily to carry a nuclear warhead, but could also be used as part of China’s conventional strike capabilities, such as attacking aircraft carriers at sea.
The annual report of the congressional U.S.-China Economic and Security Review Commission, made public Nov. 20, described Chinese hypersonic weapons as “a core component of its next-generation precision strike capability.”
“Hypersonic glide vehicles could render existing U.S. missile defense systems less effective and potentially obsolete,” the report said.
A deployed Wu-14 strike vehicle will give China’s military the capability of conducting attacks any place on earth within minutes to hours, the commission report said.
Bill Gertz is the senior editor of the Washington Free Beacon.
source »