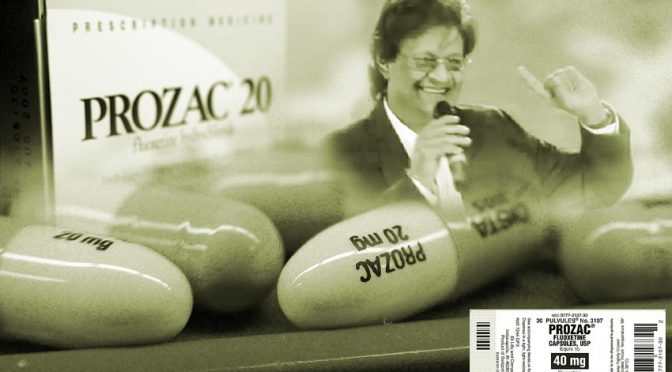 “I worked in the Pharmaceutical industry that do nothing but annihilate the population of this world.”

Dr. John Rengen Virapen, former Eli Lilly & Co executive who after 35 years of service decided to quit and speak out about Big Pharma’s method for profit and the benefit of symptomatic diseases that people live with for the duration of their lives.

Until today there are still too many who patronize the medical industry for their healthcare survival. Some even love to engage in a worthless debate that all those who peddle alternative approaches are nothing but medical quacks and conspiracy theorists, and they should know nothing better.
Awakened individuals who have suffered the folly that is called  modern medicine know exactly who the real medical quacks are, i.e. those professional peddlers of pharmaceutical products that only hide the symptoms, yet aggravate the suffering even more.
Together with the bankers, Big Pharma have been unleashing the biggest scam ever in our history in the form of deadly drugs and worthless, virus laced vaccines.
To prove that, we have a 35-year veteran of the industry that’s killing people while profiting from them at the same time .
ARVE Error: need id and provider The close relationship between drug manufacturers and the supposedly regulators is evident in the high number of drugs approved last year alone.

2014 was a good year for pharmaceutical innovation – the best, in fact, since the industry’s all-time record of 1996. FDA approved a total of 44 drugs – 39 by CDER, and 5 by CBER (Exhibit 1). As usual, this total excludes imaging agents (i.e., Lumason and Neuraceq), and only includes the biological drugs from CBER that are of rDNA origin.
AstraZeneca received the most approvals (4), which may have contributed to Pfizer PFE +0.58%’s interest. But other companies that have been hard hit by the innovation drought scored successes as well. AbbVie ABBV +0.69%, that had not produced an NME since 2004, made a remarkable return with Viekira Pak, its hepatitis C treatment which will likely achieve blockbuster status in 2015 thanks to its pricing agreement with Express Scripts ESRX +0.01%. Lilly, which had only brought one NME to market in the last nine years, notched three approvals in cancer and diabetes.
continue reading »

The U.S. Food and Drug Administration has approved Eli Lilly Co.’s Cyramza to treat non-small cell lung cancer, the most common type of lung cancer.
This form of cancer occurs when cancer cells form in the tissues of the lung. Cyramza, also known as ramucirumab, blocks the blood supply that fuels tumor growth. It is intended for patients whose tumors continued to grow after platinum-based chemotherapy, and should be used in conjunction with docetaxel, another type of chemotherapy.
Indianapolis-based Eli Lilly LLY, +1.55%   obtained Cyramza through its 2008 acquisition of ImClone Systems. Though the drug failed to meet primary goals in a study investigating it as a secondary treatment for liver cancer, it has been approved by the FDA to treat patients with advanced stomach cancer.
“The commitment to study Cyramza in a variety of malignancies provides important treatment options to patients,” said Richard Pazdur of the FDA’s Center for Drug Evaluation and Research.
The latest approval is based on a clinical study of over 1,200 patients with lung cancer. The patients were randomly assigned to receive either Cyramza with docetaxel or a placebo with docetaxel.
An expanded version of this report appears at WSJ.com.

By Jessica Wilson, BioSpace.com Breaking News StaffEli Lilly and Co. (LLY) today announced that the U.S. Food and Drug Administration (FDA) has approved its gastric cancer drug Cyramza (ramucirumab) in combination with paclitaxel (a type of chemotherapy) for the treatment of advanced or metastatic gastric or gastroesophageal junction (GEJ) adenocarcinoma in patients whose cancer has progressed on or after prior fluoropyrimidine- or platinum-containing chemotherapy.This is the second approval Cyramza has earned this year. The FDA approved Cyramza as a single agent treatment for patients with these conditions in April.
continue reading »

– Trulicity, a weekly glucagon-like peptide-1 (GLP-1) receptor agonist, is indicated for adults with type 2 diabetes as an adjunct to diet and exercise
– The single-dose pen does not require mixing nor measuring and comes with a no-see, no-handle needle

INDIANAPOLIS, Sept. 18, 2014 /PRNewswire/ — Trulicity™ (dulaglutide), approved today by the U.S. Food and Drug Administration, is the latest Eli Lilly and Company (NYSE: LLY) treatment option for adults with type 2 diabetes.
Trulicity is indicated as an adjunct to diet and exercise to improve glycemic control in adults with type 2 diabetes. Trulicity is not recommended as first-line therapy for patients inadequately controlled on diet and exercise. It has not been studied in patients with a history of pancreatitis, and other antidiabetic therapies should be considered for patients with a history of pancreatitis. Trulicity is not for the treatment of type 1 diabetes mellitus or diabetic ketoacidosis. Trulicity is not a substitute for insulin and has not been studied in combination with basal insulin. Trulicity has not been studied in patients with severe gastrointestinal disease, including severe gastroparesis, and is not for patients with pre-existing severe gastrointestinal disease.
Lilly plans to make Trulicity 0.75 mg and 1.5 mg single-dose pens available for adults in the United States later this year. This marks the first approval for Trulicity anywhere in the world. It has also been submitted to the European Medicines Agency and other regulatory bodies.
“We are delighted with the approval of Trulicity. Lilly now has treatment options in several classes of diabetes medications: orals, GLPs and insulin,” said Enrique Conterno, president, Lilly Diabetes. “Trulicity will help grow the GLP-1 receptor agonist class as a new choice for adults with type 2 diabetes.”
continue reading »

INDIANAPOLIS, Nov. 5, 2014 /PRNewswire/ — Eli Lilly and Company (NYSE: LLY) announced today that the U.S. Food and Drug Administration (FDA) has approved CYRAMZA® (ramucirumab) in combination with paclitaxel (a type of chemotherapy) as a treatment for people with advanced or metastatic gastric (stomach) or gastroesophageal junction (GEJ) adenocarcinoma whose cancer has progressed on or after prior fluoropyrimidine- or platinum-containing chemotherapy. CYRAMZA now has two FDA approvals for these patients. Today’s announcement follows the April approval of CYRAMZA as a single agent – the first approval of a treatment in the U.S. for patients in this setting.
“This FDA approval of CYRAMZA represents another milestone for people battling this devastating and difficult-to-treat disease,” said Richard Gaynor, M.D., senior vice president, product development and medical affairs for Lilly Oncology. “Lilly is pleased to continue delivering on its commitment to provide new treatment options to people living with cancer and those who care for them.”
Stomach cancer is the fifth most common cancer in the world and is the third-leading cause of cancer death.i In the U.S., approximately 22,000 people will be diagnosed with stomach cancer in 2014.ii CYRAMZA (ramucirumab injection 10 mg/mL solution) is the only FDA-approved second-line treatment option for patients with advanced or metastatic gastric or GEJ adenocarcinoma whose disease has progressed on or after prior fluoropyrimidine- or platinum-containing chemotherapy.
continue reading »

INDIANAPOLIS and RIDGEFIELD, Conn., Aug. 18, 2014 /PRNewswire/ — The U.S. Food and Drug Administration (FDA) today granted tentative approval for Basaglar™ (insulin glargine injection), which is indicated to improve glycemic control in adults with type 2 diabetes and in combination with mealtime insulin in adults and pediatric patients with type 1 diabetes. Basaglar is not recommended for the treatment of diabetic ketoacidosis.  Basaglar is Eli Lilly and Company (NYSE: LLY) and Boehringer Ingelheim’s basal insulin, which is intended to provide long-lasting blood sugar control in between meals and during the night.1
Basaglar has the same amino acid sequence as the currently marketed insulin glargine product and was tentatively approved for use with KwikPen®, a pre-filled dosing device. Basaglar is contraindicated during episodes of hypoglycemia and in patients with hypersensitivity to insulin glargine or one of its other ingredients.
With a tentative approval, the FDA has determined that Basaglar meets all of the regulatory requirements for approval, but it is subject to an automatic stay of up to 30 months as a result of litigation filed by Sanofi, claiming patent infringement. Under the Drug Price Competition and Patent Term Restoration Act (“Hatch Waxman”), the FDA cannot give final approval until the end of the 30-month period in mid-2016, unless the court finds in favor of Lilly earlier.
continue reading »

One thought on “BIG PHARMA DO NOTHING BUT ANNIHILATE THE POPULATION”