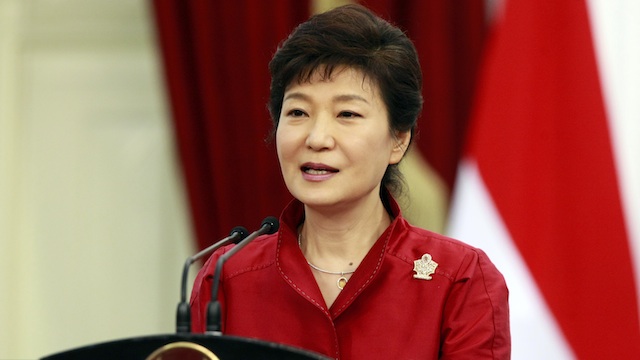 Jan. 20, 2015 (EIRNS)— took another huge step towards reunification with North Korea today, even while Obama and the West continue beating the drums for war on the North.

President Park, after a meeting with representatives from the Ministries of Unification, Foreign Affairs, and Defense, released a sweeping plan to bring about rapid reunification with the North. The briefing was arranged after the government stated that this year should be a turning point in the unification of the two Koreas, according to the Joong Ang Ilbo newspaper.

This year is the 70th anniversary of the liberation of Korea from Japan, but also of the division of Korea.

Unification Minister Ryoo Kihl-jae said the two Koreas “must reach an agreement first, but we believe this project can be carried out easily once Pyongyang accepts it.” He said the Park government’s goal is linking the railways and operating trains in time for the Aug. 15 Liberation Day.
The two Koreas already restored the severed segments of the western and eastern rail lines and ran trial runs in 2007, but the lines were never put into use.

Soong Ang Ilbo newspaper reported that President Park urged the government to create an environment in which the North can respond to the South’s offer of talks, reiterating her position that starting government-to-government talks with the North is Seoul’s top priority.