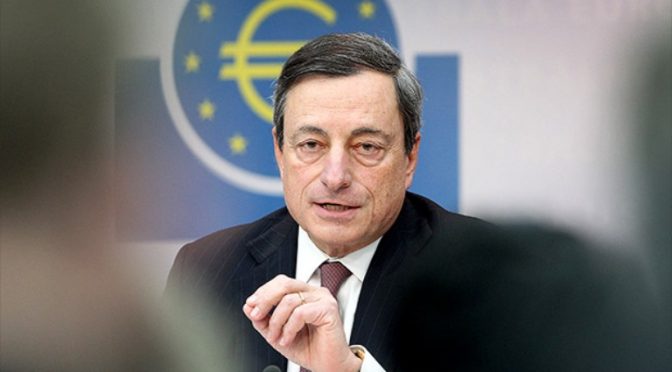 Greece departure from Eurozone is already a foregone conclusion. Even its own primary creditors, i.e. Germany, France, Italy, are themselves leaving home for economic survival from the East.
The multi-dimensional BRICS offensives are simply excruciating. Even going to war is not feasible.

Submitted by Tyler Durden on 03/18/2015 09:57 -0400
Dear Greek readers: the writing is now on the wall, and it is in very clear 48-point, double bold, and underlined font: when the ECB “leaks” that it is modelling a Grexit, something Draghi lied about over and over in 2012 and directly in our face too, take it seriously, because it is time to start planning about what happens on “the day after.” And incidentally to all those curious what the fair value of peripheral European bonds is excluding ECB backstops, the ECB has a handy back of the envelope calculation: a 95% loss.
Which also is the punchline, because while the ECB is making it very clear what happens next in the case of a “Graccident“, it has yet to provide an explanation how it will resolve the billions of Greek debt held on its own balance sheet which are about to be “marked-to-default“…

… and on which it is prohibited from suffering a loss, or else Draghi will have to fabricate even more on the run rules about how the ECB balance sheet is loss-proof… expect in this case, or that, or the other.
From Manager Magazin, google-translated:
The European Central Bank (ECB) is preparing for a possible Greek exit from the euro zone. In internal model calculations, the central bank has already calculated the consequences of different scenarios on the prices of Greek government bonds.
Fernando González Miranda, head of risk analysis of the ECB, assumed for his model calculations three different developments of the Greek crisis, the magazine reports. These variants have also been presented to our colleagues from the Bundesbank few days ago.
Under this method, the value of Greek government debt – currently around € 320 billion – in the event of a sudden, “accident-like” Farewell to the Greeks from the Euro-zone (“Graccident”) shrink to around 5 percent of the principal amount. If it were the Greek Government, however, to complete the withdrawal on the basis of ordered negotiations (“Grexit”), the ECB expects a residual value of government bonds by nearly 14 percent. And should it even create the country to negotiate a recent haircut, without having to give up the single currency, the government securities could keep at least a quarter of its original value.
A central bankers feared compared with manager magazin especially the “Graccident”. The risk is high that the Greek government members “lose track and suddenly unable to settle their bills.” In such a case, the rating agencies Greece would classify as necessarily insolvent, with the result that the central bank should have stopped emergency loans.
Or summarized :

Take this opportunity to reread the Goldman piece on whether Greece “can just print Drachmas” because it is about to be revised by the author.
One of the sources of funds for the Cabal is Big Pharma. It also serves as the weapon of mass destruction via vaccine tainted with live virus it is supposed to protect us from, and the deadly chemicals used to treat our diseases that they caused through our GMO / pesticide contaminated food supply.
We can avoid using drugs, defeat any viral attack and scaremongering easily by knowing how to build our own comprehensive antiviral system. Find more about it here.