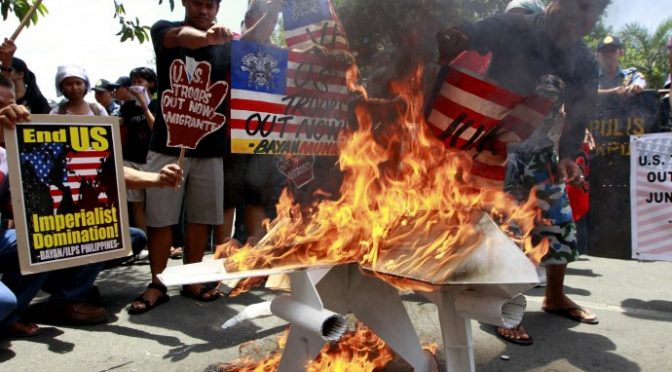 by Mike Billington
Nov. 2, 2014
The Philippines appears to be waking up to the disaster planned for it by President Obama and his controllers in London.Obama’s war plan against Russia and China has, as a key component, the transformation of the Philippines into a U.S. military base, with U.S. air, land, and sea forces deployed on Philippine military bases across the archipelago.
To that end, the Obama Administration has pushed the maleable President Benigno “Noynoy” Aquino to agree to the U.S. military takeover of the nation (despite a Philippine Constitutional restriction against any foreign military bases on its soil), and to work up the Philippine population into a rage against China. Obama demanded that the Philippines reject China’s longstanding offer to put aside territorial issues in favor of joint development of the contested regions of the South China Sea. Instead, there have been wild accusations in the press that China is intent on taking over Philippine territory, or even taking over the Philippines itself.
That ploy worked well for awhile, with Aquino and the media ringing alarm bells about Chinese imperial ambitions. The head of the Philippine LaRouche Society, Antonio “Butch” Valdes, was essentially alone in the country, warning, in numerous TV and radio interviews, that the nation was being set up for destruction in a British-American imperial war against China, driven not by Chinese actions, but by the collapse of the Western financial system, and the British Empire’s desperation to break up the Russia-China-India cooperation in establishing a new world order, based on development among sovereign nations, most recently consolidated in the burst of development coming from the BRICS nations (Brazil, Russia, India, China, and South Africa) and their allies.
But things are changing in the Philippines, as a growing number of Filipino leaders of various political persuasions have become aware that Obama is losing power, is probably going down even before the next U.S. Presidential election, and that his puppet Noynoy Aquino is likely to go down with him. Suddenly, even some members of the Philippine oligarchy have decided to take note of the fact that the economy is in a tailspin, creating desperate poverty and hunger, while much of Asia in experiencing growth in league with China, while the bravado about “standing up to Chinese aggression” is likely to spark a war.

There have been three phases of the shift in the Philippines. First, the Obama-Aquino deal to transform the nation into a U.S. military base has run into serious problems. There has been significant popular discontent, and Phillipine Congressional opposition to the reoccupation of the nation by the U.S. military.Back in 1991, the Senate voted to throw out the U.S. bases that had been there since 1898, when the U.S. defeated Spain in the Spanish-American War, and occupied its Philippine colony. The Philippine Congress even amended the Constitution to forbid any foreign bases on their soil—very much against the wishes of then-President Cory Aquino, who had been placed in office after the U.S.-directed coup against nationalist President Ferdinand Marcos. But the Constitution was ignored by Aquino’s son Noynoy.
However, those in opposition to the U.S. military occupation did not identify its broader intention: confrontation with China. The second phase came in August and October in the form of public declarations from the National Transformation Council, composed of religious and other institutional leaders from Mindanao, demanding that Noynoy step down, and expressing a national moral indignation at the President’s corruption—bribing the Congress, misuse of state funds, and other crimes. Still, the declarations did not address the danger of war and economic decay brought on by Aquino’s insane China policy.

The AIIB and War

Then, on Oct. 24, a rather unexpected development occurred, when the Philippines signed on as 1 of the 21 founding members of the Asian Infrastructure Investment Bank (AIIB), initially proposed by China and one of the crucial innovations by the BRICS nations to counter the refusal of the IMF, World Bank, and Asian Developemnt Bank to lend money for long-term basic infrastructure, and without austerity or “green” conditionalities. The Philippines signing onto the Chinese initiative was all the more unexpected in light of the fact that the Obama Administration quite openly pressured nations to boycott the AIIB.

In the last week of October, the message of pending disaster coming from the Philippine LaRouche Society finally broke through the containment in the Philippines, although ironically, from an unexpected source former President Gen. Fidel Ramos, who was the instrument of the 1986 coup against Marcos, and a champion, until now, of the U.S. military occupation of the country.
In a speech in Manila, sponsored by the Manila Times on Oct. 29, Ramos demanded that the Philippines restore close relations with China, warning of the danger of both global war, and the continuing collapse of the Philippine economy, if the current approach were continued. Ramos said: “We should agree that our two countries should return to business as usual,” adding that he does not see the possibility of Beijing resorting to war. “If one strikes, there will be counterstrikes until we obliterate the planet and humanity,” he said.
“In recent months, relations between our two nations, and even with other countries in our Asia-Pacific region, have been disturbed by misunderstanding and alarmist speculation injurious to the stability not only of China and the Philippines but also the Asia Pacific region,” Ramos noted. “We know all too well that without stability, business cannot run; people cannot create wealth; and nations cannot progress.
The distribution of power in the world is changing in a very basic way,” he said. “The very center of global gravity is moving away from the Atlantic, where it had been during the past 150 years, and tilting toward the Asia-Pacific region. For good or ill, China has become a global power and a pillar of the international system.”
Ramos pointed to the collapse of the Philippines over the past decades: “Over the years, Japan, South Korea, Taiwan, Thailand, Singapore, Indonesia, and most recently Vietnam, have transformed their economies dramatically. How did our East Asia neighbors do it? Through intelligent industrialization managed by partnerships between strong states and entrepreneurial family conglomerates. In one generation, South Korea, Taiwan, and Singapore have all risen from Third World to First World rank.”
Ramos was joined in the forum by former Amb. Roberto Romulo, who is now the chairperson of AIG Philippine Insurance (founded by Hank Greenberg, who played a leading role in the coup against Marcos). Romulo said that China’s rise “is a reality that we have to accept. Engagement and mutual accommodation is unavoidable.”
He even attacked Noynoy Aquino for taking the territorial issue over islands contested with China to international arbitration: “Although the Philippine government has the right to seek international arbitration, such as the filing of a memorial before the United Nations International Tribunal on the Law of the Sea to assert its sovereignty over contested rocks and shoals in the Spratlys, by doing so, the country only further dampened the soured relations between the two countries,” Romulo said. He pointed to the severe impact on the economy: “Technology transfer arrangements, virtually ceased . . . poor performance of the Philippines relative to ASEAN can be attributed to hesitancy in trusting our economic future, [and] our own anemic economic growth. [China has a] huge potential for us, but we are not in a position to take advantage of China’s potential.”
Most important, Romulo said the Philippine government’s position on leaning toward the United States for help has only made matters more complicated. “Because of our lack of military wherewithal, we involved the American mantle of protection. We took the U.S. side of freedom of navigation,” said Romulo, noting that the Chinese had been proposing to shelve the issue of sovereignty and opt for joint development of the sea resources. Romulo said the Philippines must acccept this approach.

It must be concluded that at least some of the Philippine oligarchs see the handwriting on the wall—that Obama is going down, and that Aquino will almost certainly follow when his protector loses power. Rather than accept what is now unmistakeable—that the Philippines will collapse even further economically, and perhaps become cannon fodder in a global war, if they continue the current course, they have chosen to end the madness of confronting China. Whether Aquino will fall in line, or be forced from office, will be determined soon.
source »
One of the significant sources of funds for the Cabal is the healthcare industry which registered a whopping $2.7 trillion in 2011, and is projected to soar to $3.6 trillion in 2016, in the US alone. We believe that this is just a conservative figure.
We can avoid using drugs, defeat any viral attack and scaremongering easily by knowing how to build our own comprehensive antiviral system. Find more about it here.

One thought on “Has Obama Lost Control Of the Philippines?”