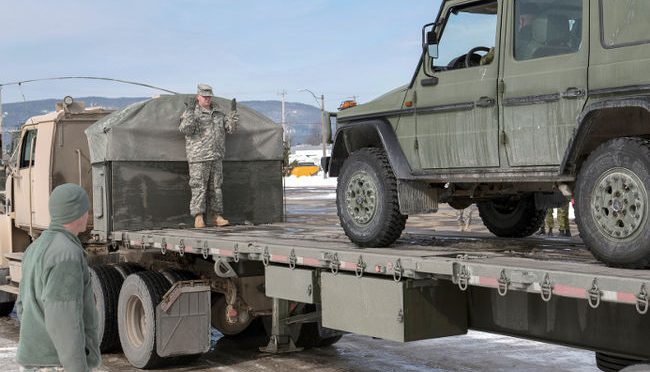 Last week, Ben Fulford said that Jade Helm 15 is an operation against the Cabal. We took a different view.
We consider these exercises to be a dry-run for the declaration of Martial Law and by extension a way of preparing US troops for an attempt to enter the US mainland by those who are tired of the United States bullying in the region.

We prefer to be proven wrong.
https://www.youtube.com/watch?v=CdKan5dd1wQ

Motorists traveling along Highway 17 are advised that a series of short convoys transporting military vehicles and equipment are scheduled to pass through Kenora in the coming days and weeks.
Exercise Maple Caravan involves Canadian and U.S. troops in moving the equipment from Valcartier, QC for training exercises in Wainwright, AB.
“It is important for the Canadian Army to be challenged with the most realistic and dynamic experiences possible in regard to operational situations such as cross-border logistics, driving in inclement weather, navigating unfamiliar roads and training with our U.S. partners, all to achieve excellence in operations and seamless coordination with our allies,” Canadian Army Commander Lt-Gen. Marquis Hainse stated in a news release. “Exercise Maple Caravan provides an exceptional opportunity for the Canadian Army to practise a joint logistical operation with its American ally, while using a cost-effective way to manage a large equipment movement to a major training exercise site.”
This exercise will include approximately 325 personnel from the Canadian Army, the U.S. Army National Guard and the U.S. Army Reserve.
“Although the training is in Wainwright there is a lot of work to be done and Maple Caravan allows our logicians to practice everything that has to do with a domestic or overseas deployment,” explained Major André Berdais, senor public affairs officer at the Canadian Army Doctrine and Training Centre. “It’s also an opportunity for U.S. and Canadian Forces to practice working together on a coordinated deployment.”
More than 72 transport trucks with flatbed trailers will move troop carriers, light armoured vehicles and equipment across five provinces. Each convoy, or ‘packet’ in military terminology, will have at least one Canadian military vehicle leading the way.
“People shouldn’t be surprised to see short convoys of 10 to 12 vehicles,” Major Berdais said. “We’re asking motorists to please be patient. Care has been made by the planners to avoid routes and times during rush hour traffic in urban areas, as much as possible.”
Once the equipment arrives in Alberta it will be put to work by the 5th Canadian Mechanized Brigade Group engaged in Exercise Maple Resolve. The brigade has been preparing for the past year to take on the duties of the Canadian Forces ‘High Readiness Brigade’. The designation passes among three Canadian army brigades every three years to maintain a high state of readiness and availability for rapid deployment domestically as well as on overseas missions. The ‘validation training’ component at CFB Wainwright prepares the Valcartier-based brigade to work in unfamiliar surroundings.
Maple Resolve will be conducted at the Canadian Manoeuvre Training Centre in Wainwright, Alberta from April 20 to May 23. The exercise will involve nearly 4,500 military personnel from Canada, the United States and the United Kingdom.
[email protected]
[email protected]
source »