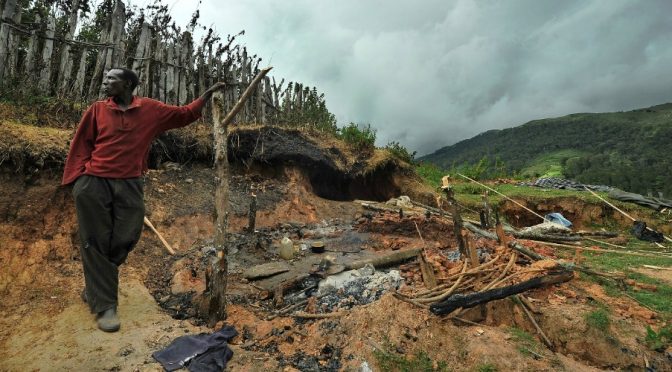 When the World Bank lends a country a loan it doesn’t mean that that country receives actual funding for a project. Part of the agreement is for the Bank to choose its own pre-selected foreign controlled companies to handle the project, i.e. project management, which are mostly shell corporations of the owner of the Bank itself.

We don’t own the World Bank as much as we don’t own the United Nations, IMF and the BIS, of course. They are.
These big favored service providers will then pass the actual job on to a local company, through a sub-contract. What this means is that the actual funding is now drastically reduced and worst, the actual project may not be exactly what the locals need because the nature of the project is dictated by the products and services those favored companies are selling.
The recipient country, is in this context, will just act as a sales clerk between the seller/banker group and the actual beneficiary, the people. As the clerk, the local politicians will also see every project as a potential cash cow [from local sub-contractors] providing the necessary funding for the next election, also a cash cow by itself.
Worst of all, every World Bank loan is being used to promote a given policy, i.e. the Western policy, that ultimately abolishes sovereignty.
China-led AIIB sought to correct this “carrot and stick” policy and promised to implement global wide megaprojects that truly serve humanity’s purpose.
In all of these elaborate exercises, we must remember that while a debt is created and charged upon the people by the Bank without extending actual money in the first place, the actual value that would be created as a result from the labor of the debtor will remain in the ownership of the Bank until the former will be able to pay the imaginary debt.
That’s a scam of the worst kind.

by Nadia Prupis, staff writer
The World Bank regularly broke its own promises to protect Indigenous rights around the globe by funding projects that displaced or threatened the livelihood of millions of the most vulnerable people on the planet, a new investigation has found.
Evicted and Abandoned, a joint report published Thursday by the International Consortium of Investigative Journalists and several other outlets, found that a slew of World Bank-funded projects—including dams and power plants—have pushed 3.4 million people out of their homes or off their lands around the world since 2004.
ICIJ reviewed more than 6,000 World Bank documents and interviewed former and current employees and government officials who were involved in Bank-funded projects and found that in many cases, the World Bank violated its own internal policies and ignored evictions caused by its projects. The organization also did little to ensure the safety or livelihood of those who were resettled, in many cases not providing them with new housing or job prospects, as required.
“There was often no intent on the part of the governments to comply—and there was often no intent on the part of the bank’s management to enforce,” said Navin Rai, a former World Bank official who was responsible for the organization’s protection of Indigenous people from 2000 to 2012. “That was how the game was played.”
Between 2009 and 2013, World Bank Group lenders invested $50 billion in projects—like oil pipelines, mines, and dams—that were most likely to have “irreversible or unprecedented” social or climate impacts, such as physical or economic displacements, which have been shown to “rip apart kinship networks and increase risks of illness and disease,” according to the report.
“Resettled populations are more likely to suffer unemployment and hunger, and mortality rates are higher,” the report states.
Moreover, the World Bank and its private-sector lending arm, the International Finance Corp., sometimes bankrolled regimes and companies that were accused of human rights violations including rape, murder, and torture, the report found. In some cases, the lenders continued to finance the operations even after evidence of such abuses emerged.
In Ethiopia, one initiative which was focused on health and education led to land grabs which involved violent mass evictions. Authorities there diverted millions of dollars from a World Bank project to fund those forced resettlements, and in 2011, soldiers who were responsible for carrying out the evictions killed at least seven people and targeted villagers for beatings and rape, according to the report.
The World Bank Inspection Panel found that the organization had failed to acknowledge an “operational link” between its Ethiopian initiative and the mass eviction campaign—an oversight that violated the World Bank’s own rules.
In Nigeria, a Bank-funded project to improve water supplies, roads, and power in Lagos resulted in the eviction of nearly 2,000 slum-dwellers in Badia East, the report found. After Badia East residents sounded the alarm to the inspection panel, chairwoman Eimi Watanabe refused to open an investigation, instead urging them to negotiate with the Lagos state government, which gave out small sums of money as compensation. The panel then reportedly closed the case because of “the progress made and speedy provision of compensation to displaced people.”
Through its projects in those countries, as well as in Albania, Brazil, Honduras, Ghana, Guatemala, India, Kenya, Kosovo, Peru, Serbia, South Sudan, and Uganda, the World Bank “[failed] to protect people moved aside in the name of progress,” the report found.
“In these countries and others, the investigation found, the bank’s lapses have hurt urban slum dwellers, hardscrabble farmers, impoverished fisherfolk, forest dwellers and indigenous groups—leaving them to fight for their homes, their land and their ways of life, sometimes in the face of intimidation and violence,” the report reads.
ICIJ’s report comes as the World Bank is increasing its call for projects that require forced resettlements. On Friday, the bank will begin its yearly Spring Meetings with the International Monetary Fund, where new policies will be considered. Some of the organization’s officials have expressed doubt over what the bank has called its “strongest, most state-of-the-art environmental and social safeguards,” but which critics say give foreign governments room to avoid complying with the bank’s standards.
Ahead of the meetings, a coalition of more than 260 global NGOs, farmer groups, and trade unions is publicly posing three questions to the bank about its role in the land grabs, as well as “climate destruction and the corporatization of agriculture.”
Those questions include:

In a joint letter to the World Bank published Wednesday, 85 NGOs urged the organization to address the “numerous and serious failings of the safeguards system” and solve its “deep-seated fundamental flaws… by identifying the people who have been displaced by bank-financed projects and providing them with genuine sustainable development opportunities through a series of new grant-funded projects.”
Among the signatories are Human Rights Watch, Oxfam International, and the Africa Law Foundation, as well as Raquel Rolnik, former United Nations Special Rapporteur for Adequate Housing.
The report’s findings are “deeply troubling,” the letter reads. “While it is important that the review of Bank-financed projects was undertaken and finally published, the lack of transparency demonstrated by the Bank in concealing the Review’s findings—for three years in the case of part one and nine months in the case of part two—is unacceptable for a public institution.”
ICIJ and Huffington Post will feature stories, photographs, and videos of these resettlements on a microsite hosted by the Huffington Post, beginning Thursday, April 16.
CommonDreams
One of the significant sources of funds for the Cabal is the healthcare industry which registered a whopping $3.09 trillion in 2014, and is projected to soar to $3.57 trillion in 2017, in the US alone. We believe that this is just a conservative figure.
We can avoid using drugs, defeat any viral attack and scaremongering easily by knowing how to build our own comprehensive antiviral system. Find more about it here.