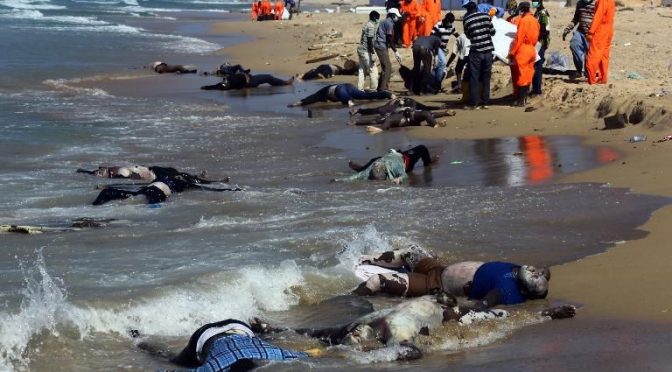 Here’s another proof that the EU are more focused on bleeding out Greece rather than facing their responsibilities on the Libyan people who are victims of their armed political intervention, or was it an outright armed robbery?

April 24, 2015 (EIRNS)—Following the tragic drowning of between 700 and 900 refugees fleeing Libya for Europe on April 18, Helga Zepp-LaRouche was asked about the EU policy regarding refugees fleeing war and economic depredation in Africa, during her Wednesday webcast of the party she heads, the Civil Rights Movement-Solidarity (Bürgerrechtsbewegung-Solidarität, BüSo) on April 22.
Mrs. Zepp-LaRouche, speaking in German, said she sees for the moment two completely different paradigms behind the reactions to the crisis, and one of them is a form of new fascism. The EU “replaced the “Mare Nostrum” program that was run only by Italy until last year, with a program under which no attempt is even made to save the refugees from the Mediterranean. Instead, the cynical argument goes: “The more people drown, the more it will act as a deterrent to those who would too greatly fear to risk making the trip.”

“That shows the utter moral bankruptcy of the EU…. We deliberately let thousands of people drown, in order to defend Fortress Europe. That same mentality is at work in the destruction of the Greek economy by the Troika, where it is simply accepted that the mortality rate will increase in Greece, just as in Italy, Spain, and Portugal. And the same mentality prevents real development, through the refusal to supply aid for Africa more generally.

“And I think the same fascist mentality is behind the fact that although a neo-Nazi coup has occurred in Ukraine, and opposition figures are killed in the streets, the West continues to remain silent about that, but churns out propaganda in favor of the current regime.

“I find it scandalous that, 70 years after the end of the Second World War and the end of fascism,” be it in California, Yemen, Iraq, Syria or Libya, “such an inhuman attitude prevails, which accepts depopulation, population reduction, such that, taking all these aspects together, one can only suspect that the intention is precisely to reduce the world population….

“And I find it utterly hypocritical today to take action against a 93-year-old former SS man, while at the same time tolerating a policy which, albeit in a different form, is based on exactly the same principle.”

Mrs. Zepp-LaRouche, has an hour-long live webcast every Wednesday, which can be accessed via the BüSo website at http://bueso.de/webcast. Her April 22 webcast is available at https://www.youtube.com/watch?v=7OJ6x1eFU5c.

April 24, 2015 (EIRNS)—Friday’s negotiations to meet the assumed deadline for Greece to reach an agreement with the Eurozone Finance Ministers on a debt and economic program, ended in acrimony, threats against Greece, and self-deluding chatter from the Trans-Atlantic crowd that their system, including the Euro, might survive an imminent Greek default.
Maltese Finance Minister Edward Scicluna said succinctly: “I would describe today’s meeting as a complete breakdown in communication with Greece.” Asked if the EU would agree to give partial EU financial assistance in exchange for a more limited program of “reforms,” Dutch Finance Minister Jeroen Dijsselbloem said: “No.” Bloomberg’s sources reported that the Finance Ministers “hurled abuse at Greek Finance Minister Yanis Varoufakis,” calling him “a time-waster, a gambler and an amateur.” European Central Bank chief Mario Draghi threatened that the ECB may restrict its current funding of liquidity for Greek banks. (An ECB governing council meeting is set for May 6.)
An element of unpredictability, however, has been introduced by the one-hour private meeting between the Greek and German heads of state, Alexis Tspiras and Angela Merkel, the day before the finance ministers meeting. Merkel called the discussions “constructive,” but said they agreed to keep the contents confidential. Tspiras spoke of optimism and significant progress, saying “we have covered a large part of the distance.”
Whatever the two did or did not agree to, the banker-owned Finance Ministers made it known that they consider it unacceptable that heads of state dare meet independently to discuss any political solution to a matter which affects the banks. Austrian Finance Minister Hans Joerg Schelling was most up front:

“Tsipras sought to circumvent the Finance Ministers authority less than 24 hours earlier, pleading his case with German Chancellor and French President François Hollande on the sidelines of a summit on immigration in Brussels. Under euro-area procedures, it’s the finance ministers who have to sign off on any aid disbursement, and Merkel said last month that she’s not prepared to override those controls.”

Their public ire targeted Tspiras, but such hysteria reflects their actual concern that Angela Merkel could break ranks. As leading economic forecaster Lyndon LaRouche has emphasized, Angela Merkel is no heroine, but she is smart enough to know that Germany cannot survive Greece leaving the euro.
Adding an unintentional note of humor to this existential brawl, Credit Suisse issued a note today titled “Greece: Die Another Day,” reassuring themselves that Greece has the liquidity to survive “for another month or so…. And the government could stretch until July, if needed, when the ECB loans mature.”