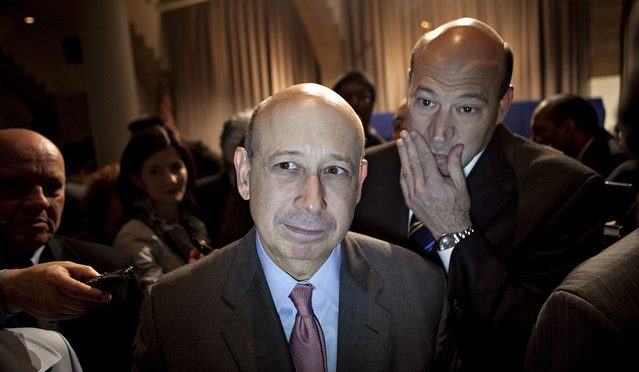 One more indication that the IMF as an institution is now allied with, if not under the full control of the BRICS World Bank, is the renewed call for clampdown on bank CEO bonuses which is like adding insult to injury to an already battered global economy.

To its credit, the IMF is trying to convince its lending partners to write off a portion of Greece’s debt. But the question is, will they every listen?
Will the whole fiat banking system write off  everyone’s debt by 8th of December?

.
Christine Lagarde, the managing director of the International Monetary Fund (IMF), has called for a renewed crackdown on bankers’ bonuses, to tackle the “distorted” incentives that led to the global financial crisis.
Lagarde told an audience in Washington that despite a battery of regulatory reforms, “financial stability is still not well-entrenched”, more than seven years after the collapse of Lehman Brothers.
US, UK and EU regulators have all urged banks to exercise pay restraint since the crisis. A series of rules have been introduced – including the EU’s contentious cap on bonuses, which restricts them to 200% of base pay, even with shareholder approval.
But Lagarde insisted there was more to be done. “Incentives related to compensation practices need to change, so that rewards are no longer so much tied to myopic actions and excessive risk-taking,”she said while appearing at an event on finance and ethics, alongside Federal Reserve chair Janet Yellen.
Lagarde added that the IMF’s research suggests bonuses should be tied to longer-term, rather than short-term gains; and that banks should use “clawback”, to force staff who have hit their firm’s performance to pay back part of their bonuses.
Lagarde argued that the culture of financial sector institutions still needs to change. “Ultimately, we need more individual accountability,” she said, calling for boards to be more clearly separated from banks’ executives. She added that more female leaders could also help tame some of the worst excesses of bankers’ behaviour.
Lagarde also highlighted recent research by the IMF, which suggested that emerging market economies should be cautious about expanding their financial sectors.
So-called “financial deepening” – making banking facilities available to as many people and businesses as possible – is often promoted as a key plank of economic development. The IMF study showed, however, that when the growth of the financial sector runs ahead of rules and regulation, it can jeopardise a country’s stability.
“When financial sector development outpaces the strength of the supervisory framework, there is excessive risk taking and instability,” Lagarde warned.
The Guardian

The first rule of Goldman Sachs bonuses is: you do not talk about them…

Goldman Sachs, the highest payer in the banking world, tells its global partners of their “comp” (compensation) on Friday, when it releases its financial results for the year. Their teams then get the good – or bad – news next Tuesday. For partners, overall pay is expected to average more than the £3m they got in the previous year. Other big Wall Street banks’ bonus days are also looming, as they kick off the season this week for reporting their 2014 profits.
…
Recent documents from the High Court case of the Libyan Investment Authority vs Goldman Sachs allegedly detail just how lucrative individual sales can be: the Libyans claim that Goldman made more than $250m (£165m) of revenues from four trades done with just one signature. Goldman denies the figure.
While the speculation about comp numbers is at fever pitch this week, jockeying for the bonus has been going on for months. At Goldman, the process starts in late summer and autumn during the review process. Performances are assessed by managers and peers. So, while the amount of money you made for the firm is a major factor, it is not the only factor – you have to win your colleagues’ and bosses’ admiration too. In other words, it’s crucial to convince all and sundry not just how brilliant you are but also what a great team player.
At Goldman, that review is followed by another, more secretive operation called “quartiling” where staff’s bosses come up with a score of one to five. It is this which dictates the final bonus. A four or five, and you’re in grave danger of getting the boot as part of the annual cull of the weakest 5 per cent. A one or two, and you could be looking at a life-changing pay-cheque.
“A friend was once asked by his boss: what is the minimum you would accept your bonus to be for you to stay? He gave his answer. When bonus time came, he got exactly that number. So of course, he was kicking himself for not demanding more,” says one banker. “On the other hand, I once asked for three times the bonus I got the previous year and ended up actually getting less than I had last time.”
continue reading »
Meanwhile, the bleeding continues as Greece merely avoided default after paying the troika with €200m from its own taxpayers, which leading some to wonder,  “Is the Tsipras government really working for the Greeks or the London / Wall Street bankers?”
Even the EU president has made a conclusion that the Anglo-Saxon bankers are out to tear down the whole Eurozone for good. But it’s not just the EU that is floundering in its financial standing but the whole Western Fiat Financial System is, in fact, teetering into ruins.


Greece gained some breathing space in its battle to stay solvent on Wednesday after it met the deadline for a €200m (£149m) debt payment and the European Central Bank extended its lifeline to the country’s banking system.
The International Monetary Fund confirmed it had received the repayment, allowing the debt-stricken country’s rescue package to remain in place until next week when another €750m is due to the Washington-based organisation.
In a separate boost for Athens, the ECB raised the ceiling on aid to Greek banks under its Emergency Liquidity Assistance programme by €2bn, to €78.9bn.
Amid fears of a bank run, the ECB has increased the limit gradually, keeping up the pressure on the Syriza-led government to strike a deal with its creditors.
The lending trio of the ECB, European Commission and IMF issued a formal statement on Wednesday presenting a united front, after reports that the IMF was pressing its partners to write off part of Greece’s debt.
The three institutions said they “share the same objective of helping Greece achieve financial stability and growth,” and would work towards “concrete” progress at Monday’s planned meeting of eurozone finance ministers.
continue reading »

The BRICS Behind New IMF

Back in April 2012, IMF was trying to raise funds for the Eurozone  but was unable to get enough from countries who have a disproportionately high voting power, it needs to reach out to the BRICS which eventually give it a $90+ Billion boost…
“In April, the IMF targeted $430bn to deal with the effects of the eurozone crisis on the global economy, with the UK promising $15bn, but only gathered firm commitments of around $360bn when the BRICS countries – Brazil, Russia, India, China and South Africa – held back.
At the G20 summit in Mexico, BRICS leaders said they had “agreed to enhance their own contributions to the IMF” by $95.5bn.
The money came with a warning that things had to change at the Fund, long dominated by the now troubled economic powers of Europe and the United States, which is not contributing despite its huge voting power on the IMF board.
While Washington has insisted Europe has enough resources to resolve its problems itself, it is also clear that the deeply divided Congress is in no mood, given the US economic problems, to contribute rescue funds for others.
The IMF chief said in a statement on Tuesday: “Countries large and small have rallied to our call for action, and more may join. I salute them and their commitment to multilateralism. As a result, total pledges have risen to $456bn, almost doubling our lending capacity.”
continue reading »
One of the significant sources of funds for the Nazionist Khazarian Mafia is the healthcare industry which registered a whopping $3.09 trillion in 2014, and is projected to soar to $3.57 trillion in 2017, in the US alone. We believe that this is just a conservative figure.
We can avoid using drugs, defeat any viral attack and scaremongering easily by knowing how to build our own comprehensive antiviral system. Find more about it here.