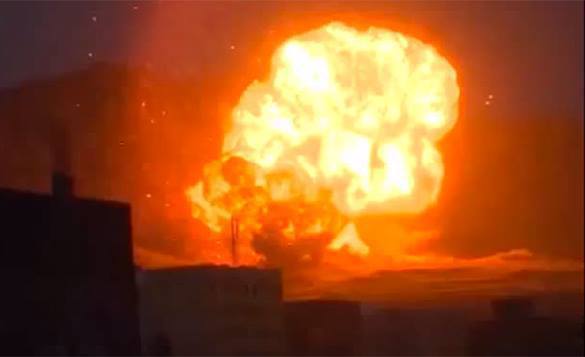 There is a great possibility that the Saudi-Israel alliance has gone nuclear in Yemen based on this video…
https://youtu.be/pVgPKxYVxb0

A neutron bomb or officially known as one type of Enhanced Radiation Weapon is a low yield fission-fusion thermonuclear weapon (hydrogen bomb) in which the burst of neutrons generated by a fusion reaction is intentionally allowed to escape the weapon, rather than being absorbed by its other components. The weapon’s radiation case, usually made from relatively thick uranium, lead or steel in a standard bomb, are instead made of as thin a material as possible to facilitate the greatest escape of fusion produced neutrons. The “usual” nuclear weapon yield—expressed as kilotons of TNT equivalent—is not a measure of a neutron weapon’s destructive power. It refers only to the energy released (mostly heat and blast), and does not express the lethal effect of neutron radiation on living organisms.

Compared to a pure fission bomb with an identical explosive yield, a neutron bomb would emit about ten times the amount of neutron radiation. In a fission bomb at sea level, the total radiation pulse energy which is composed of both gamma rays and neutrons is approximately 5% of the entire energy released; in the neutron bomb it would be closer to 40%. Furthermore, the neutrons emitted by a neutron bomb have a much higher average energy level (close to 14 MeV) than those released during a fission reaction (1–2 MeV). Technically speaking, all low yield nuclear weapons are radiation weapons, that is including the non-enhanced variant. Up to about 10 kilotons in yield, all nuclear weapons have prompt neutron radiation as their most far reaching lethal component, after which point the lethal blast and thermal effects radius begins to out-range the lethal ionizing radiation radius. Enhanced radiation weapons also fall into this same yield range and simply enhance the intensity and range of the neutron dose for a given yield. https://www.youtube.com/watch?v=d-DwTh-MZJY

Saudis have begun to wipe Yemen off the map. Tactical strikes have hit the city.
Shocking video reveals proton bombardment from a neutron bomb.
Israel is reported to be the one to deploy such neutron bombs.
Any doubts about the nuclear attack on Yemen attributed to Israel, as evidenced in two Israeli F16s shot down and forensically identified, are now gone.
Forbidden strikes have brought about a storm of worldwide protest.
Obama has recently promised to provide every assistance including US military force to any “external threat” the rich Arab states of the Gulf may face.
Pravda.Ru

Is US Planning to Increase Military Aid to Israel Even More?

New Reuters report suggests that funding could spike to as much as $4 billion a year
Sarah Lazare, staff writer

The United States is “likely” to significantly boost its already astronomical military aid to Israel, Reuters reported Thursday.
Citing an anonymous U.S. official, journalist Dan Williams wrote that, after the $3 billion annual military aid package expires in 2017, this amount could be raised to $3.6 to $3.7 a year. An unidentified Israeli official pegged this post-2017 amount between $3.5 billion and $4 billion.
Reuters framed the probable hike as a potential bid to assuage tensions between the two allies over nuclear negotiations with Iran. “They (the United States) are trying to douse the fires after our flare-up about the Iran deal,” the Isreali official told Reuters.
However, the U.S. has maintained heavy military and political support for Israel long before the Iran talks were on the table. Since 1948, Israel has been the largest recipient of U.S. foreign aid, and the vast majority of the at least $121 billion the U.S. has given has been in the form of military funding.
Israeli Prime Minister Benjamin Netanyahu reportedly confirmed that military backing could rise but vowed to continue his opposition to diplomacy unabated. White House National Security Council spokesman Alistair Baskey denied the reports altogether.
Whatever the motive, a further spike in U.S. military aid to Israel would almost certainly be controversial. Human rights advocates have long opposed the role of the U.S. in arming, financing, and politically backing Israeli occupation, siege, colonization, and war crimes—from Lebanon to Palestine. The Palestinian call for Boycott, Divestment, and Sanctions urges an immediate end to such aid.
CommonDreams
One of the significant sources of funds for the Fascistic Nazionist Khazarian Jesuit Mafia is the healthcare industry which registered a whopping $3.09 trillion in 2014, and is projected to soar to $3.57 trillion in 2017, in the US alone. We believe that this is just a conservative figure.
We can avoid using drugs, defeat any viral attack and scaremongering easily by knowing how to build our own comprehensive antiviral system. Find more about it here.