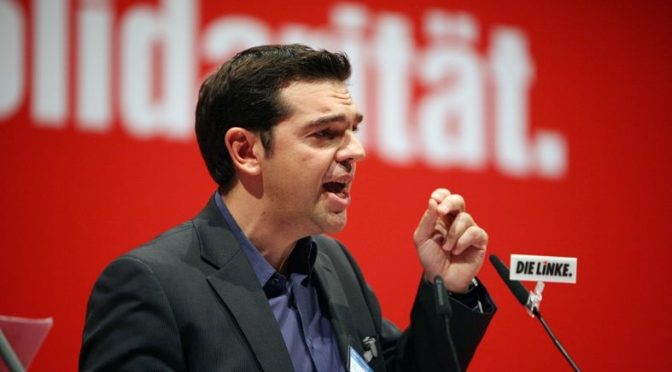 Greek PM Tsipras just submitted the IMF/ECB/EU’s “humiliating and blackmail” bailout proposal that requires the Greek government to impose VAT as high as 45%, and massive pension cuts that have resulted to the widespread “misery and pillaging” of the country since its debt crisis exploded five years ago, to a national referendum.

It’s 2 In The Morning And Greeks Are Lining Up At ATMs; Alpha Limits Online Banking

Because correlation does not equal causation, we present the following with no comment other than to note that according to Goldman’s estimates (shown below), Alpha Bank, which has announced that web banking will “operate with limited functionality” over the weekend, happens to have the smallest ELA buffer of the four major Greek banks.
And of course, Greek PM Alexis Tsipras has just called for a referendum on euro membership to be held next Sunday.
Draw your own conclusions.

Notice decreased function of the service Alpha Web Banking for the weekend issued by the bank, tufting scenarios in view of the Eurogroup Saturday.
Specifically, the communication states: From Saturday 06.27.2015 at 11:30 am to Monday 29/06/2015 at 8:00 am through the Alpha Web Banking there will be possibilities: Information on the balances and accounts and cards movements. Registration of orders on transfer of funds at a later date (will not be direct transfers executed). Registration of orders on payments dated 29/6 or higher . Enter orders for transfers to other banks dated 30/6 or later. The transfer orders will be registered for Sunday 28/06/2015, will be performed on Monday 29/06/2015.

And meanwhile, at the ATMs (via Protothema):

Let it be understood that the Greek crisis was not caused by its people borrowing money from the banks, but by the bailing out of its banking and financial institutions during the recession that started in 2007. Economic recession is, of course, not a natural phenomenon that “just happens” and the whole planet is not in debt in itself, by itself.
What I’m trying to say is that this planet has not borrowed any money from another planet, but some quarters in our society just want to impose its will upon everyone else to keep everything under their full control including those that sustain decent lives. Who gives them the right to do so?
The Tsipras government tried to please these god-behaving animals with higher VAT collections and pension cuts but it wasn’t enough for the monsters. They want to extract more. There’s no option left but to use the “nuclear solution”, i.e. to put the IMF-EU bailout proposal to a national referendum.

The other covert story, however, that led to the collapse of the Western financial system is the withdrawal of Asian gold used to back up the printed currencies of the West.

The withdrawal was necessary due to the failure of the West to abide by the agreed purpose of the lending of Asian hard currencies, which was supposedly to finance for the massive development of the planet using Western science and technology. Instead, the West did the exact opposite to what was agreed to and used the assets to fund its military industrial complex and waging wars all over the world.

The late John F. Kennedy sought to end this regressive attitude and renewed the United States prior commitment through the Hilton Memorial Agreement. This action, among others, cost him his own life.

Since this is really the case, no amount of prayers would please the NWO troika for they don’t have anything to offer anyway except violence and more deadly distractions.

We now believe that there is a “waiting game” involved, too, i.e. the waiting game for the total eradication of financial debts or “debt jubilee” across the entire fiat monetary system, managed discreetly by the Vatican through the BIS, which is scheduled to happen in December 8th, although Ben Fulford would like to antedate it to September 13th. This global financial reset is dubbed as the “Year of Extraordinary Mercy” by Pope Bergoglio himself, and is said to last for an entire year.

The basic problem that confounds the Tsipras government really is that 80% of the Greeks still want to stay within the EU, without austerity imposition. That would, of course, defeat the entire design and purpose of the NWO one-currency organization.
Now, the people of Greece have to decide between austerity within the EU, or financial independence outside of The Union.
Greece could always print their own money [which they are covertly doing already, reports said] for domestic exchange purposes. The beauty of doing so is that the new sovereign currency is not backed up by debt to a third party, but is founded solely by their own ability to create value.
If you’re in Greece, which option would you choose?
One of the significant sources of funds for the fascist Nazionist Jesuit Khazarian Mafia is the healthcare industry which registered a whopping $3.09 trillion in 2014, and is projected to soar to $3.57 trillion in 2017, in the US alone.
We can help take down the Dark Cabal by avoiding drugs, defeat any viral attack and scaremongering easily by knowing how to build our own comprehensive antiviral system. Find more about it here.

One thought on “Tsipras Gov't Submits EU Bailout "Blackmail" to Nat'l Referendum; Greeks Still Lining Up in ATMs @ 2AM”