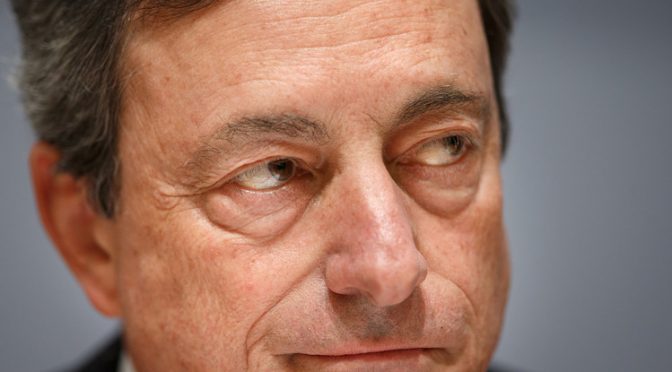 This could be temporary, but the ECB is not cutting off liquidity yet and Greek banks may open tomorrow as usual. But to mitigate massive withdrawals, the Greek government might impose some form of capital control this time around.

The European Central Bank said it won’t stop the Emergency Liquidity Assistance program, which has been providing funds to the Greek banks. Some media had earlier predicted such a move.
“The Governing Council decided to maintain the ceiling to the provision of emergency liquidity assistance (ELA) to Greek banks at the level decided on Friday,” the bank said in a statement, adding that the decision may be reviewed at a later date.
Earlier, the BBC reported that the emergency lending program would be cut, citing well-placed sources. Greek banks have been using money provided under the ELA program to sustain cash withdrawals from bank accounts.
The Greek government may impose capital control – that is put a cap on how much money can be withdrawn over a period of time – to prevent a major bank run expected next week, the BBC Radio reported, saying that Greek Finance Minister Yanis Varoufakis confirmed this to them.
The minister, however, later denied, stating this, according to Reuters.
Earlier on Saturday, the Eurogroup decided the Greek bailout program wouldn’t be extended beyond Tuesday. The country is expected to default on a €1.5-billion payment due to the International Monetary Fund on the same day.
The possibility of ELA termination was suggested by former ECB board member Lorenzo Bini Smaghi, who said the bank can no longer provide emergency liquidity to Greek banks.
“Given the uncertainty over Greece remaining in the euro, the ECB will no longer be able to supply liquidity to the Greek banks, who in turn will be unable to supply euros to their clients,” he wrote on Sunday.
French Prime Minister Manuel Valls said the ECB should continue the emergency lending despite the looming default.
“The European Central Bank is independent, but I don’t doubt it will assume its responsibilities,” Valls said in an interview broadcast on Europe 1 radio. “I don’t think it can cut off support, to put it another way.”
Greece is planning to hold a national referendum on a deal proposed by foreign creditors to settle the country’s debt problem. The alternative to coming to a compromise agreement would be Greece exiting the eurozone.
RT

Given how government leaders seem to spend much of their lives in Brussels, isn’t it about time they concentrated on running their own countries?
Indecision is the enemy of progress. In an era of political pygmies at the tip of the EU behemoth, it is an embarrassing comedown to see the cradle of Western civilization reduced to something akin to an insecure schoolgirl taking the faltering first steps towards an adolescent wardrobe on a slow Saturday afternoon at the mall.
It is quite credible to argue that Europe lost the plot decades ago – the last time the French managed to balance their budget was 1974, for instance. Since then, the dizzying ways of the EEC – a pleasant notion of a trading bloc – has given way to the pomp, the circumstance, and ultimately the incompetent, corrupt, bloody-minded dysfunction of the EU…which neither incorporates all of Europe, nor is actually a union largely because few citizens endorse such a silly, centrally planned venture. Not that Brussels notices, as every problem is met with a call for ‘ever greater union’ – a process that has never resolved anything.
Thus, nation states still retain considerable power, despite Brussels’ many intrusions into everyday life. Despite the central dictats of Brussels delivering more red tape and little or no benefit to citizens, national governments still have rather a lot to do. However, in recent weeks ordinary citizens have been left pondering the effectiveness of the blob. Barely a week goes by without national leaders, finance ministers and vast retinues of bureaucrats zooming to Brussels to discuss (and never it seems, resolve) a dizzying assortment of European problems. The ‘crisis’ list is now so long, there is barely time to discuss Britain’s quest for more ‘EU efficiency’ (how oxymoronic is that?).
Frankly, I am not terribly upset to hear of occasional Brussels dinners where ministers gather and chew the cud over a fine glass of French red accompanied by a splendid cheese with the lure of a good Cognac. However, when, as with the current Greek charade, the result is seemingly endless back-to-back meetings concentrated around fine food and wine, it does feel a bit as if the Bourbons are back in town. Come to think of it, French Royalty used to allow some paying spectators the pleasure of watching the court dine. At least if Brussels sold a few tickets to see President Juncker liberally disperse EU assets, it might partially defray dining costs.
However, the conspicuous consumption of the EU mechanism in calorific terms is merely one element of a complex and costly jigsaw. Fly into any summit-hosting city and the national airport is awash with privately chartered jets or national showpieces sitting motionless, while elsewhere government officials imbibe, discuss and – this is the EU after all – fail to achieve anything (apart perhaps from indigestion).
The chronic waste of national resources in attending endless summits is hardly speeding processes up either. Nobody has agreed anything with Greece, and any vaguely seasoned analyst could have foreseen such an outcome months ago. Even some EU governments have been wisely noting the blithe disregard for time and money: Finland’s Finance Minister Alex Stubb referred to one of the many Greek ‘crisis’ meetings recently as “a waste of air miles.”
Ultimately, the discussion about government waste appears to have been buried deep in the bureaucratic bowels of the blob itself. However, after five years of semi-endless bailouts, the EU is now lurching from crisis to crisis on a more regular basis than ever. Moreover, the ancient regime of analogue centralism is draining valuable resources from the nation states. Voters elected their government to run their countries, not to spend endless time trying to pin square pegs in round holes to enable the continuation of an exhausted European project, which, culinary virtues notwithstanding, is ideologically, morally, financially and organizationally bankrupt.
Back in the day, the elites used to send ‘seconds’ to stand in for them at nebulous meetings. EU governments would be well advised to send, say, their gardeners with a mandate to just say no to future summits, unless, or until, the EU has an outbreak of management. Otherwise national governments face being effectively decapitated through prime ministerial absence at endless, futile, ‘crisis summits.’
At least, we might get a Greek resolution soon thanks to Mr Tsipras calling for a referendum, but then again who is paying for that?
Patrick L Young is expert in global financial markets working in multiple disciplines, ranging from trading independently to running exchanges.
RT
One of the significant sources of funds for the fascist Nazionist Jesuit Khazarian Mafia is the healthcare industry which registered a whopping $3.09 trillion in 2014, and is projected to soar to $3.57 trillion in 2017, in the US alone.
We can help take down the Dark Cabal by avoiding drugs, defeat any viral attack and scaremongering easily by knowing how to build our own comprehensive antiviral system. Find more about it here.