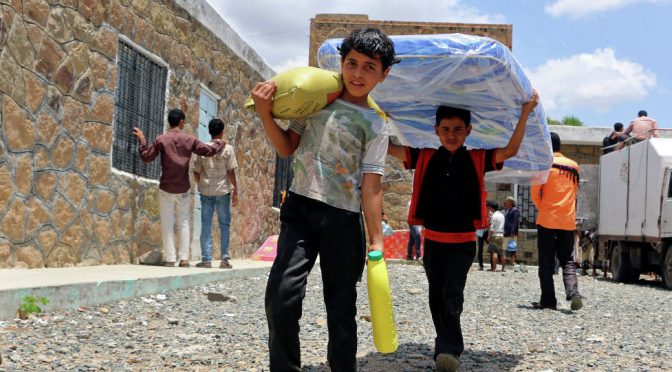 We posted a while ago that Saudi Arabia may be foregoing its objective to oust Assad for its EU oil pipeline project in exchange for an opportunity to invest in the Russian market. Now, the House of Saud is also putting its one-sided war with the Houthis in Yemen on hold.

If this humanitarian ceasefire holds indefinitely, we can expect the war hawks in Washington to start making noise again. In fact, it has already begun with the Joint Chiefs of Staff nominee.
Even the Cabal spokesman himself is admitting that they are training ISIL forces for the purpose of removing Assad from power, among other terror false flag operations in the future.

All parties of the conflict have agreed on a pause in fighting to give the population access to humanitarian aid provided by the international community.

“It is imperative and urgent that humanitarian aid can reach all vulnerable people of Yemen unimpeded and through an unconditional humanitarian pause. Full and unhindered access by humanitarian agencies to all parts of the country, including through sea and airports, should be ensured with a view to reaching people in need, including with essential medicines, vaccinations, food and water,”

Speaking before the Senate Armed Services Committee on Thursday, Dunford noted that Russia’s “behavior” is “nothing short of alarming,” adding that Moscow “presents the greatest threat to our national security.”

“If you want to talk about a nation that could pose an existential threat to the United States, I’d have to point to Russia,”

Referring to mythical Russian involvement in the civil war in eastern Ukraine, which Moscow has repeatedly dismissed for lack of evidence, Dunford stated it would be “reasonable” to provide Ukraine with lethal weaponry.

“Chairman, from a military perspective I think it’s reasonable that we provide that support to the Ukrainians,” Dunford noted. “Frankly, without that kind of support, they are not going to be able to defend themselves against Russian aggression,” the general added.

The general’s comment was met with enthusiastic approval from Republican Senator John McCain, the committee’s chairman, who took the opportunity to score some political points against Barack Obama by declaring that while “Vladimir Putin’s Russia continues its onslaught in Ukraine,” the US “has refused Ukraine the weapons it needs and deserves for its defense.”
The hearing also covered other military matters, including the war in Afghanistan, the air campaign against ISIL, US assistance for rebels fighting against the Syrian government, and issues related to future defense budgets.

Expected to easily pass Senate confirmation hearings, Dunford is set to become the head of the Joint Chiefs of Staff, a group of military officers who advise the Secretary of Defense, the Homeland Security Council, the National Security Council and the President on military issues.

On Wednesday, The Wall Street Journal reported that Washington and Kiev are presently in negotiations on the expansion of the US military training program in western Ukraine to include regular army and special forces units.
Sputnik