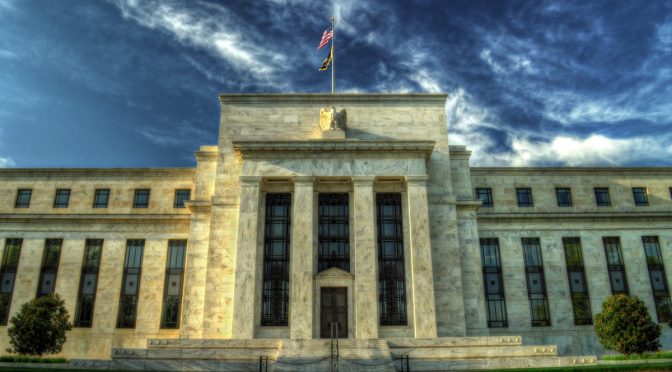 Everything about the US economy is ready to explode. The hesitance of the Federal Reserve, Inc. to raise interest rates was not just about China.

In fact, China has been very generous as of late as its leader Xi is visiting the White House days from now. China has implemented its own “quantitative easing” for its stock market to mitigate possible economic collapse worldwide.
The Federal Reserve, however, is experiencing a major dilemma, so huge it refuses to acknowledge. It is facing an ETF bubble that requires higher interest rates and a massive derivative equity bubble requiring zero interest rate, all at the same time.

The Emperor Has No Clothes!

by Tom Heneghan, International Intelligence Expert
Sunday   September 20, 2015​
UNITED States of America –   It can now be reported that the privately owned U.S. Federal Reserve is in a box facing an ETF fixed asset bubble that requires higher interest rates on one side of the box and a massive derivative equity bubble on the other side of the box requiring interest rates stay at zero.
Note: The yield curve is about to go hybrid, which can easily lead to a U.S. Treasury bond collapse. The borrowing costs are escalating.
P.S. The world currency market remains held hostage by Central Bank of Japan derivatives tied to Barclays Bank of England and HSBC of Hong Kong.
It gets worse!
Bank of America is now in need of a $15 trillion bail out tied to derivative exposure to NAZI German Deutsche Bank.
P.P.S. At this hour the patriotic U.S. Military has informed the Bush-Clinton Crime Family Syndicate that they will not tolerate even one member of the Bush-Clinton Crime Family Syndicate bloodline remaining on American soil given that they are directly responsible for the destruction of the American Republic.
In closing, the media psyop involving loser and stooge current Vice President Joe Biden is nothing more than an attempt to protect loser and Bush-Clinton Crime Family Syndicate member Hillary Rodenhurst Clinton from a future Democratic presidential candidate that will decapitate her campaign and expose the Bush-Clinton Crime Family Syndicate, including its media stooges.
Biden is directly backed by the same Hollywood Jewish mobsters (Irv Bass) that support Hillary. In other words we have a Hillary-Biden ponzi scheme. It won’t work.”
Tom Henegan
The global derivatives bubble is said to amount at least $500 Trillion that only exist as computer bits and has nothing to do with real economy. This is the foundation of the Rothschild’s power and those who actually own 147 supercorporations at the top of the pyramid.

We’ve also seen how top 100 companies are laying off massive numbers of employees in favor of automation.

Indeed, the conflict between employment busting automation technology and the profit oriented monetary economic system has never been greater, and the solution the rulers of the planet is implementing is “inclusive capitalism.”
Remember, in the 1990’s we also had a buzzword that survives until today, i.e. “reengineering”?
Reengineering sought to maximize profit by reducing workforce and streamlining production procedures. They’re not just reducing workforce but have relocated their production elsewhere for cheap labor.
Are they going to bloat up the companies again and bring in more employment to accomplish what the recently invented buzzword, i.e. “inclusive capitalism”, defines?
That’s what we are going to find out during the debate that will follow after the Papal speech at the UN.
These people who will be debating have asserted their leadership because they believe they know better. It’s pretty obvious they could not see nor accept the facts that their capitalist system is in conflict with itself, so much so that they could not even afford to play within its own rules.

And we are made to suffer.
It’s time we take the reins of power and management of this planet’s resources for our Common Good. It’s time we end this endless cycle of economic depressions by eliminating the true root cause of the problem.
We’ve given too much time and credit to these non-performing bunch of self-aggrandizing scums who turned out to be absolute liabilities. They must be the ones being terminated, not the employees of companies that’s been contributing real growth and progress.
Real progress has been delivered not by bankers and all pencil pushing parasites that appointed themselves as very important economic managers, but by technicians and skilled workers who toiled for ages with their raw talents and genius. They are the real backbone of our civilization.
We must keep the skilled workers and technicians working until such time when all tedious repetitive routines are completely automated and labor is rendered obsolete, in which time those who truly rendered the actual effort should be rewarded sustained rest and recreation they truly deserve;
While those suit and tie criminals, i.e. those same bunch of idiots that will form the majority of the crowd that will be attending the Grand Slave Trade Relaunching at the United Nations later this week, must be collared and herded into FEMA camps where they truly belong.

We don’t need any of them

We don’t need a government to provide security for us, we can do it by ourselves. In lieu thereof, we must remove central governance in favor of self-governance. We don’t need financial experts and bankers to run the economy and manage our lives. Our lives would be significantly better without them.
This is possible once we made basic necessities fully satisfied by default and not subject to numerical acrobatics we now know as economics.  In fact, we can eliminate this corrosive economic system altogether, and implement, as one example, a global wide permacultured farms, to provide us with endless supply of organic food. When everybody’s stomach is full and healthy, who needs security by then?
The behavior of an animal changes positively when it is not hungry. How much more when a human being is living in full comfort. The only exception to this principle is the Cabal who instituted these deceptive mechanisms to which we all need to protect ourselves from.
Of course, we could not expect anything better from these animals that are proven to be considerably lesser than a humble pig.
So, why do we keep allowing these pseudo experts, who continue making life as complex and miserable than it should be, to reign upon us?

Why can’t we work on our common desire to live in perfect harmony among each other and savor what Nature and our infinite creativity could offer?