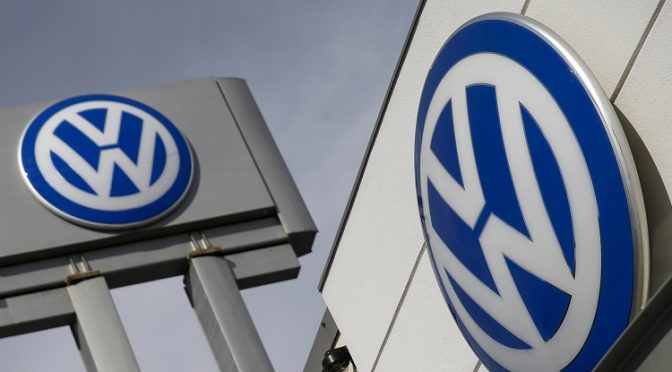 More than a day ago, Volkswagen admitted to have rigged its emissions data to deceive its customers and other stakeholders since 2009.

‘We totally screwed up’, says US Volkswagen chief – video
“The US Environmental Protection Agency (EPA) said on Friday that Volkswagen had installed illegal software to cheat emission tests, allowing its diesel cars to produce up to 40 times more pollution than allowed. The US government has ordered VW to recall 482,000 VW and Audi cars produced since 2009…

At up to $37,500 a car (£23,000) in the US, fines could add up to $18bn – more than a year’s net profit for Volkswagen. Its managers could face criminal charges and a US law firm has already launched a class action lawsuit on behalf of car buyers. Long-term damage to the company’s reputation could be huge. Volkswagen likes to claim it is environmentally conscious and has billed its cars as “clean diesel”. Max Warburton, an analyst at the financial research group Bernstein, said: “This is really serious.”
Is the scandal limited to VW in the US?
Possibly not. The news knocked billions of pounds off the value of other carmakers amid concern that rigging emissions tests is common across the industry. John German, one of the officials who uncovered the scandal, said it could extend to other countries and manufacturers.
Stuart Pearson, an analyst at the stockbroker Exane BNP Paribas, told the FT: “The artificial gaming of emissions tests threatens to become the car industry’s Libor” – referring to the fraudulent fixing of global interest rates that has cost the banking world billions. Greg Archer, a former UK government adviser, told the Guardian there was lots of anecdotal evidence about the use of “defeat devices” to disguise environmental impacts and that the scandal could spread beyond diesel and into Europe, where tests are more prone to abuse.”
TheGuardian
Interestingly, the VW emission rigging scandal broke just days prior to the UN speech of the Pope about “climate change” and “inclusive capitalism”.
Add to that is the publication of the massive rigging in the auctions of US Treasury bonds by Big Bankers which may support the Papal stand on “unfettered capitalism”.

The timing couldn’t be more “coincidental”. This is a far better script than the previous one:

We are indeed witnessing a very high octane geopolitical drama at this point in time, for our intellectual pleasure that is and nothing else.
In fact, the US will be sending highly advanced nuclear bombs into Germany.
“The United States Air Force (USAF) is going to station 20 new B61-12 nuclear bombs in Germany, each 80 times more destructive than the one used on Hiroshima, a report says.
The nukes will be deployed to Luftwaffe’s Büchel Air Base in the western state of Rhineland-Palatinate, which is already host to USAF nuclear bombs stored there since 2007 under a nuclear sharing deal, Germany’s ZDF public television network reported on Tuesday.
According to the report, in the third quarter of the current year, the base will receive budget for the future storage and deployment of the new atomic weapons, which are considered to be on the borderline between strategic and tactical, as well as funding for upgrading the German Panavia Tornado multipurpose aircraft that are also stationed in the base and are capable of deploying older types of nukes. ”
continue reading


These people really have the innate ability to create multiple diversions to cover their main attack, and the propensity to spend the taxpayers’ money wisely.