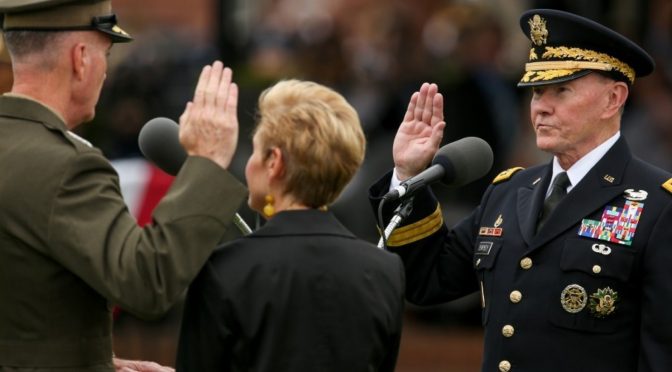 Following Boehner’s resignation, another CEO has retired, this time from the US military.

They sang the soldier Marty Dempsey to the end of his 37 years in uniform, and he sang it back to them: “Good night and joy be with you all.”
In an emotional and stirring conclusion to the change of command ceremony, Joint Chiefs Chairman Gen. Martin Dempsey turned over his post to Marine Gen. Joseph Dunford and then stepped down from the dais to join the Army band and chorus in the traditional Scottish and Irish ballad: “The Parting Glass.”
Dempsey then strode across the parade field at Joint Base Myer-Henderson Hall for the last time with eight grandchildren scampering about him while his wife, Deanie, cradled a sleeping ninth grandchild.
Dempsey joked earlier about how his classmates from the West Point class of 1974 had bets on how many times he would cry during the ceremony. There was no official count, but Dempsey made frequent use of his handkerchief.
The bittersweet tone of the ceremony had been set from the opening when Dempsey’s son, Army Capt. Chris Dempsey, read his father’s formal retirement order signed by Army Gen. Mark Milley, the new Army chief of staff. His voice cracked as he finished and he rushed away from the microphone.
In his remarks, President Obama called Dempsey “a singular leader for our military and our nation, and one of the finest men I know.”
As commander-in-chief, Obama said that he chose Dempsey, first as Army chief of staff and then as Joint Chiefs Chairman, “because of his vision for our military as a more versatile and responsive force.”
“I chose him because he had the steady hand we needed in this moment of transition as we tackle emerging threats and support so many of our troops as they transition to civilian life.”
“Perhaps most of all, I chose Marty because he’s a leader you can trust. Marty, you’ve always given it to me straight,” Obama said.
All in the military “turned to Marty for inspiration and brotherhood,” and all “listened attentively when Marty offered advice,” said Defense Secretary Ashton Carter. “I’m confident, Marty, that you will be missed,” Carter said, while joking that Dempsey was being replaced by “the other Irishman, Joe Dunford.”
Dunford said that Dempsey was leaving with the lasting affection “of all soldiers, sailors airmen and Marines.”
In his own remarks, Dempsey said that the Irish can be “somewhat stingy” with compliments. “When they really respect someone, they say simply ‘You’re a good man.’ Well, you’re a good man, Joe Dunford.”
Dempsey said the praise aimed his way “rubs a bit uncomfortably against my conviction that duty is its own reward,” and he thanked Obama for occasionally “allowing me to release my inner leprechaun from time to time” at National Security Council meetings.
After West Point, Dempsey became an armor officer and rose through the ranks, serving several times in Iraq. He deployed to Iraq in 1990 in Operation Desert Storm and returned in 2003 as commander of the 1st Armored Division. As a three-star, he commanded the Multinational Security Transition Command-Iraq from 2005-2007.
As chairman since 2011, Dempsey oversaw the withdrawal of troops from Iraq and Afghanistan, coped with the downsizing of the Army and the Marine Corps, argued against budget cuts, and engaged in numerous bouts on policy with Sen. John McCain, R-Ariz., at Senate hearings.
He embraced the “whole of government” approach to international crises promoted by the Obama administration, emphasizing the role of the State Department and law enforcement, and constantly urged caution in the use of military force.
“Caution is not a pejorative in my view in the application of force,” Dempsey said in a recent interview with the Pentagon’s news service.
Obama referred to the box Dempsey kept on his desk at the Pentagon. Inside were cards with information on the 132 soldiers who were killed in combat under his command. The inscription on the box read “Make It Matter.”
“It has been my privilege to wear the cloth of our nation,” Dempsey said. “I ask only this in parting — make it matter.”
Obama and most of the guests departed but Dempsey, his family and others stayed for the musical tribute that closed with his singing of “The Parting Glass.” The final verse was:

A man may drink and not be drunk

A man may fight and not be slain
A man may court a pretty girl
And perhaps be welcomed back again
But since it has so ought to be
By a time to rise and a time to fall
Come fill to me the parting glass
Good night and joy be with you all.
— Richard Sisk can be reached at [email protected]