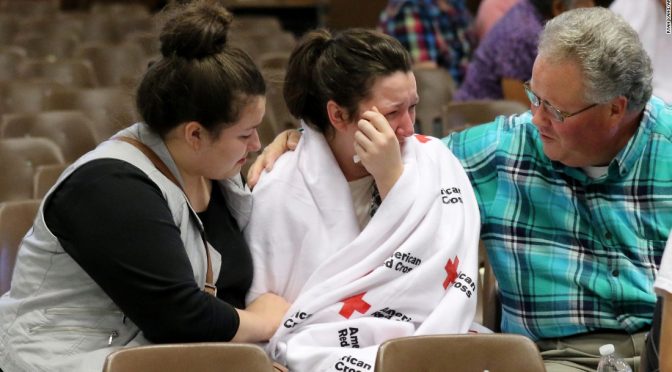 Indeed, we can agree on that Mr.Obama.
Well, the current situation in Syria and on the homefront call for more diversions, so what can your handlers do?

Mr. Obama, you’ve been shamed and you deserve it, by the Russians when your highly trained ISIS/L terror group is in the process of being fully decimated just on the first hour of the Russian airstrikes, with the help of the Iraqis and the Iranians.

Based on past interventions, two weeks are more than enough for the Russians.
On the homefront, the militia and veteran groups, 6 million of them, are saying they are ready for one more battle. You should be trembling then, and out of your desperation you still think gun control is the way to go?
Go for it then.
Anyway, here are the discrepancies of the latest mass shooting production:

So, how could the school security personnel allowed the entry of “three weapons, handguns and at least one long gun”?
Have they become blind after the school shooting exercise?
We don’t think that’s the intended effect. We think that security personnel should have been more alert in checking everyone’s boobs and asses, just like the TSA. That’s always the natural consequence of a drill. They, the participants, will talk about it for days.
But a mere one week from the exercise, and just like any other false flag operations, a real one occurs?
The next item of the formula is the “manifesto” of an “angry man” is already published by The Guardian, yeah, an overseas news outfit, you know, to make it more plausible:

“He appears to be an angry young man who was very filled with hate,” one law enforcement official said. read more
How could this police officer even say that when it normally takes time to really know someone. He’s not even a classmate or a neighbor. Wait, could they interview his classmates if this is a false flag?
No. That would make the whole operation very complicated. Don’t worry, the media will take care of the rest.
Another sign of a poorly produced “mass shooting” is the number of supposed victims. First count was 10, then they settled for 20 to make it more gory. And under normal circumstances, any professional TV reporter will never mention the phrase “blood splatter” out of respect to the victims. But, since there are no real victims here, and the object of the whole production is to sow fear against guns, CNN must state the obvious lie.

So, why aren’t you talking about the doubletake Virginia reporter shooting anymore?

Surely, there will be more discrepancies that will be exposed in the next few days as crisis actors are properly identified. Why are most of them overweight, by the way?
Anyway, we think Obama or his handler should have fired the same scriptwriter a long time ago.

The third formula is the “actual event narrative” from the relatives of either the “victims”,or the “assailant”, with all the soup and pepper and told in a straight face, no tears, improperly timed supporting actor’s expression of “sympathy” . Watch the “grieving” crisis actors giving corny interviews at False Flag Central / CIA News Channel, CNN below.

The fourth formula is always this: the shooter won’t live to tell the whole story by himself.He’s either dead or drugged. But mostly dead nowadays. Presenting the suspect in front of a judge, will make that judge idiotic.Judges are in another level altogether.
But somehow, CNN is having a hard time making up its mind this time.

Himself?
Yeah, there’s not a female mass shooter just yet. Kinda anti-feminist scriptwriter quite a bit. Like we said, should have been kicked out a long time ago.
Update: Recycled Crisis Actress Identified!