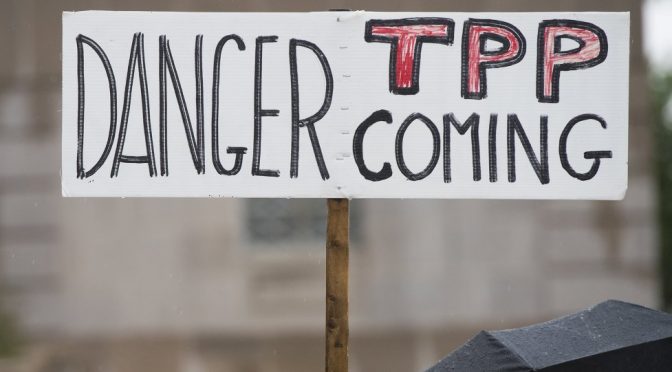 NASA did it again; providing perfect cover for the approval of Trans-Pacific Partnership deal that would benefit megacorporations and further enslave you.

The secretive trade pact is expected to cover about 40 percent of the global economy.

Pacific Rim trade ministers reached a deal on a sweeping trade pact that will cut trade barriers and set common standards for 12 countries (the USA, Australia, Brunei Darussalam, Canada, Chile, Japan, Malaysia, Mexico, New Zealand, Peru, Singapore, and Vietnam), an official familiar with the talks said on Monday.
The TPP has been negotiated in unusual secrecy between the United States and 11 Asian and Pacific Rim nations. The controversial trade pact is expected to cover about 40 percent of the global economy. Uncertain implications for workers’ rights, employment and the environment have drawn heavy criticism from labor unions and watchdogs.

NASA has uploaded dozens of galleries containing over 10,000 photos from the manned Apollo missions. Blurry astronaut faces, stunning lunar vistas and iconic moonwalking photos – they are all there.
The high-res images are untouched and unprocessed, showing exactly what the astronauts were facing on their trips to the final frontier.

The huge trove of photos includes every single picture taken on the moon’s surface on the Apollo missions, and also some from the journey to the moon and back, the project’s lead, Kipp Teague, told The Planetary Society.

Shaving, eating space food, smiling into the camera and standing on the moon surface – these are just a few routine moments for the Apollo mission astronauts shown in the galleries.

What is the Trans-Pacific Partnership and why you should care

A dozen Pacific Rim nations reportedly reached an agreement on the Trans-Pacific Partnership, the secretive, US-orchestrated pact that seeks common standards among its members. Opponents say the deal is more about consolidation of power than “fair trade.”

DETAILS: TPP deal covers 40% of world’s economy, negotiations have been going on for 5 yrs http://t.co/ZeovtvdC5h pic.twitter.com/g3oi45Y3M7

US President Barack Obama has promoted the deal as a way of solidifying economic relations between the United States and fast-growing Asian countries that surround China.

“TPP is good for American businesses and American workers…we will make the case on the merits as to why it will open up markets for American goods, American exports, and create American jobs,” Obama said in a statement on April 28.

#TransPacificPartnership is a tough, high-standard, modern trade agreement that reflects our values on labor, the environment & human rights

The economic benefits of the deal will go to corporations, not workers in any of the participating nations, opponents say. Labor unions, among many others, have lined up to oppose the TPP based on concerns over a number of issues, including currency manipulation, environmental and health protections, food safety, pharmaceutical monopolies, offshoring of jobs, internet privacy, government transparency, and local control.


The deal has also been criticized for its lack of transparency, as the contents of the TPP have been kept in strict secrecy. Leaked drafts of TPP negotiations have suggested that corporations would be allowed to sue governments in private courts over lost profits due to regulation, elevating corporate entities to the status held by sovereign nations.

Are you down with #TPP? Well you should be, because it’s been passed. @TheResident for #inthenowRThttps://t.co/7ktcDYnfSr

Opponents also say TPP is less about trade and more about geopolitical maneuvering and further corporate domination over participating nations’ trade and investment affairs.
READ MORE:  ‘No to Corporate greed’: Thousands of Anti-TPP protesters rally in New Zealand (VIDEO)
“Of TPP’s 29 draft chapters, only five deal with traditional trade issues,” according to Public Citizen, a government transparency watchdog that has followed the TPP. “One chapter would provide incentives to offshore jobs to low-wage countries. Many would impose limits on government policies that we rely on in our daily lives for safe food, a clean environment, and more. Our domestic federal, state and local policies would be required to comply with TPP rules.”

this has nothing to do with free trade. the #TPP is a self-authored investors rights charter: http://t.co/3BBFxCCzak

What are the conditions of the TPP?
Knowing what, exactly, is inside the TPP has been nearly impossible to this point, even for members of the US Congress, who have limited access to the pact’s contents. The five-year-long trade negotiations have been kept as secret as possible. However, some terms of the agreement have been leaked by transparency advocates like Wikileaks.
READ MORE:  Australian politicians slam TPP for ‘excessive secrecy’
Those leaked terms suggest that multinational companies and major industries, such as Big Pharma, operating in North America, South America, and Asia will be granted broad powers to  challenge sovereign nations’ government regulations, rules, actions and court rulings – federal, state, or local – before tribunals organized under the World Bank or the United Nations. This system has been called the “investor-state dispute settlement” (ISDS) system.
In March, Wikileaks released a chapter of the pact concerning ISDS.
READ MORE:  Leaked TPP investment chapter: Corporations can sue states in private courts
“Enactment of the leaked chapter would increase U.S. ISDS liability to an unprecedented degree by newly empowering about 9,000 foreign-owned firms from Japan and other TPP nations operating in the United States to launch cases against the government over policies that apply equally to domestic and foreign firms,” Public Citizen explained.


TPP’s intellectual property chapter, as of May 11, was leaked in June to Politico by an opponent of the deal. Provisions in the draft text signaled extreme difficulty for makers of generic drugs to compete with brand-name pharmaceuticals overseas. They would also block sales inside the US of generic “biologics,” new and expensive treatments for dangerous maladies, thus restricting Americans’ treatment options.
On every issue discussed in the chapter – from duration and extension of patents to data retention by pharmaceutical companies – US negotiators advocated the position of big drug companies and always demanded stricter intellectual property provisions, the document indicates.
Responding to the announcement that the TPP negotiations between the 12 nations have concluded, Doctors Without Borders issued a strong denunciation of the pact’s medicinal and health implications.

“The big losers in the TPP are patients and treatment providers in developing countries.”  said Doctors Without Borders/Médecins Sans Frontières (MSF), callling TPP ” the worst trade agreement for access to medicines in developing countries, which will be forced to change their laws to incorporate abusive intellectual property protections for pharmaceutical companies.”
The group says the deal will “raise the price of medicines for millions by unnecessarily extending monopolies and further delaying price-lowering generic competition.”
READ MORE:  TPP deal would force CBC, Canada Post to work for profit only – leak
As for another example of the agreement’s ramifications, the Obama administration upgraded Malaysia’s ranking on human trafficking in July, raising it from the bottom tier, in a move that observers believe was done to ensure the US can legally enter into a trade agreement with Malaysia.
“Malaysia’s record on stopping trafficking in persons is far from sufficient to justify this upgrade,” Human Rights Watch said in a statement to Reuters. “This upgrade is more about the TPP and US trade politics than anything Malaysia did to combat human trafficking.”

Why not forbid? #TPP labor chapter "includes commitments to discourage importation of goods that produced by forced labour or child labour."

How did the TPP materialize?
The United States has led the charge throughout the trade deal’s negotiation period. Inside the US, the pact was widely opposed by Democrats in Obama’s own party, while Republicans have generally supported the effort.
READ MORE:  Corporations shell out $1.2mn in Senate contributions to fast-track TPP
However, in a stroke of masterful political theater by the Obama administration and its allies, the public controversy in the US among the political class in Washington rested in offering the executive branch “fast-track authority” – officially known as Trade Promotion Authority – to conduct and conclude trade legislation. In effect, this gives Congress the right to accept or reject the final agreements, but not to make any changes to them.
READ MORE:  House Republican compares unions opposing TPP trade pact to Nazi propagandists
So, the at-times rancorous debate among top politicians was over offering the current president and his successors supreme power over massive trade deals like TPP, not whether such negotiations or terms of an agreement are worthy of pursuing in the first place.
After several failed votes in both the US House and Senate, the two chambers eventually granted Obama fast-track authority in June. Obama signed the bill later that month.
LISTEN MORE:
Now that negotiations have concluded, what’s next?
Participating nations much now approve the TPP draft as is, presented to them by their respective trade officials. In the US, “various congressional notice and report filing requirements add up to about four and one half months between notice of a final deal and congressional votes being taken,” Public Citizen’s trade policy director Lori Wallach explained. “Even if all of the timelines are fudged by the 90-day notice to Congress before signing, a TPP vote cannot occur in 2015.”
READ MORE:  Obama is ‘opportunist,’ Hillary Clinton no different just ‘more militant’ – Chomsky
Wallach added that many congressional opponents of the deal are making noise about the agreement’s provisions, as are at least ten US presidential candidates, including Democrats Bernie Sanders and Hillary Clinton, as well as Republican Donald Trump. The deal’s conclusion must also reckon with the political whims and cycles of the other 11 nations involved, meaning that the TPP is not out of the woods just yet.

Wall Street and other big corporations have won again. In the Senate, I will do all that I can to defeat the #TPP agreement.

Polling, meanwhile, has suggested that Americans are not in favor of trade deals like the TPP, which is unpopular in all participating nations except for Vietnam, according to a recent Pew survey.
rt.com

3 thoughts on “NASA Releases 10,000+ Apollo Images Ahead of TPP Passage”