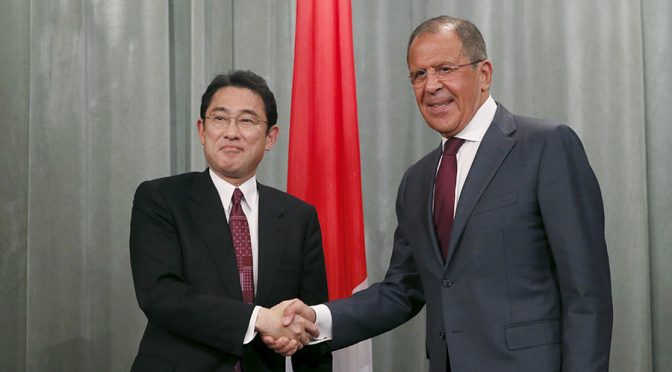 All over the globe, countries are sharing “good tidings” with their neighbors, eager to explore areas of possible “win-win” cooperation. They are all tired of wars.
They are all ready for the 21st Century, eager to know what’s in store for the Age of Aquarius, the Age of Abundance.

But not the United States, and certainly not Zbigniew Brzezinski, the cunning Middleman between the US, Inc. and war profiteers. What they are ready instead is to bomb Japan’s nuclear infrastructure anytime it won’t follow their instructions as it did in 2011.

North Korean leader Kim Jong-un says his country seeks better ties with the neighboring South to protect peace and stability on the Korean Peninsula, which has been locked in a circle of military rhetoric over the past years.
Kim made the comments in a meeting with visiting Chinese envoy Liu Yunshan in Pyongyang, Xinhua, the official news agency of China, reported on Saturday.
North Korea needs “a peaceful and stable external environment as it is striving to develop (its) economy and improve people’s livelihood,” Kim said, adding Pyongyang “is willing to make efforts to improve relations between the north and the south and safeguard the stability of the peninsula.”
The Korean Peninsula has witnessed tension since the Korean War, which lasted from 1950 to 1953 and ended in an armistice. No peace deal has been signed since then, meaning that Pyongyang and Seoul remain technically at war.
South Korean soldiers ride military trucks on the road leading to the truce village of Panmunjom in the border city of Paju on August 23, 2015. (© AFP)
Kim further said Liu’s visit will “play an important role in the development of bilateral ties,” expressing hope that China will “maintain close high-level exchanges and strengthen pragmatic cooperation in various fields.”
For his part, Liu said that preserving stability and peace in the volatile Korean Peninsula is in the interest of all sides, and that Beijing was “willing to work with the DPRK (North Korea) to strive for early resumption of the six-party talks on the nuclear issue.”
The six-party negotiations, which included Russia, China, the United States, Japan, South Korea and North Korea, aimed at persuading North Korea to abandon its nuclear program, stalled in April 2009 after the United Nations imposed tougher sanctions on Pyongyang for conducting nuclear and missile tests.
The diplomatic meeting between Kim and Liu came ahead of a massive military parade in Pyongyang on Saturday that will mark the 70th anniversary of the founding of the North’s ruling Workers’ Party.
presstv.com

It’s not the time for business as usual with Russia because of Ukraine and Syria, US State Department spokesman John Kirby claimed, commenting on recent talks on a World War II peace treaty between Moscow and Tokyo.
“Again, we still maintain that, broadly speaking, it’s not time for business as usual with Russia on Ukraine,” Kirby said when addressed the issue during a daily briefing by the State Department on Thursday.
The fact that Russian airstrikes against Islamic State (IS, formerly ISIS/ISIL) are now making headlines “doesn’t mean we’ve turned a blind eye to Ukraine and to what Russia continues to do there,” he stressed.
However, the spokesman acknowledged that “there seems to be some efforts in the right direction here on Minsk [peace treaty] by both sides, and we want to encourage that.”
The verbal intervention comes despite the fighting has practically stopped in eastern Ukraine in recent weeks, following more than a year of a bloody conflict between Kiev forces and rebels demanding self-governance, in which nearly 8,000 people died.
READ MORE: Tanks withdrawing from contact line in Lugansk People’s Republic
Kirby refused to get into the specifics of the Russia-Japanese talks, calling them “sovereign discussions” and advising journalist to address Tokyo for further details.
Earlier on Thursday, the Russian Foreign Ministry said that Moscow and Tokyo have agreed to continue contacts on the issue of the peace treaty, which the two countries never signed after the end of World War II.
Japanese Foreign Minister Fumio Kishida visited Moscow in September to discuss bilateral relations.
READ MORE: Tokyo wants ‘new level’ in relations with Moscow – PM Abe
The southern Kuril Islands remain the main obstacle to signing the peace treaty, as Japan doesn’t agree with the decision taken by Soviet, US and UK leaders to hand all of the Kuril Islands over to the USSR after World War II.
Tokyo claims the islands of Iturup, Kunashir, Shikotan and Habomai, calling them Japan’s “Northern Territories.”
READ MORE: Moscow officials ‘have always and will continue to’ visit Russian Kuril Islands – PM
rt.com

US should disarm Russia in Syria: Zbig

US foreign policy expert Zbigniew Brzezinski says the United States should retaliate if Russia does not stop bombing its assets in Syria.
Brzezinski, the national security adviser for former President Jimmy Carter, advised President Barack Obama to attempt to disarm the Russians if they keep attacking the CIA-trained militants in Syria.
“The Russian naval and air presences in Syria are vulnerable, isolated geographically from their homeland,” Brzezinski wrote in an article published by the Financial Times on Sunday. “They could be ‘disarmed’ if they persist in provoking the US.”
“But, better still, Russia might be persuaded to act with the US in seeking a wider accommodation to a regional problem that transcends the interests of a single state,” he added.
A new US intelligence assessment has found Russia has targeted militant groups backed by the Central Intelligence Agency (CIA) in Syria.
The assessment, shared by commanders on the ground, has led American officials to conclude that Russian warplanes have intentionally struck CIA-backed militants in a string of attacks running for days, the Wall Street Journal reported.
Moscow’s apparent decision to strike CIA’s militants “at best” reflects “Russian military incompetence,” and worst, “evidence of a dangerous desire to highlight American political impotence,” wrote Brzezinski.
He added that if Moscow continues to target these people, then Washington should retaliate against Russians.
“In these rapidly unfolding circumstances the US has only one real option if it is to protect its wider stakes in the region: to convey to Moscow the demand that it cease and desist from military actions that directly affect American assets,” he said.
Obama administration officials are debating how the United States can come to the aid of its proxy forces on the ground without risking a broader conflict, according to the Wall Street Journal.
US officials said Russia’s moves in Syria posed a direct challenge to the Obama administration’s foreign policy on the Middle East.
Moscow’s commitment to the Syrian government runs counter to current US policy, which calls for the ouster of Syrian President Bashar al-Assad.
Russia has been beefing up its military presence in neighboring Syria, deploying warplanes, tanks and personnel to an airfield in the western port city of Latakia. It launched a coordinated air campaign to fight Daesh (ISIL) and other terrorists.
Senior Russian officials have said the current campaign is limited to airstrikes, but have not ruled out “volunteers” on the ground.
Syria has been gripped by a foreign-backed militancy since March 2011 aimed at toppling the Assad government. The violence has claimed the lives of more than 250,000 people so far.
presstv.com

“US makes stunning admission about Syria’

Former US national security adviser Zbigniew Brzezinski’s assertion that Washington should retaliate against Moscow for Russian airstrikes against US assets in Syria is a “stunning admission” of the role America has played in the Syrian crisis, an American scholar in Wisconsin says.
Dr. Kevin Barrett, a founding member of the Muslim-Jewish-Christian Alliance, made the remarks in a phone interview with Press TV on Tuesday while commenting on Brzezinski’s latest article about Russia in the Financial Times.
Brzezinski advised President Barack Obama to attempt to disarm the Russians if they keep attacking the CIA-trained militants in Syria.
“The Russian naval and air presences in Syria are vulnerable, isolated geographically from their homeland,” Brzezinski wrote on Sunday. “They could be ‘disarmed’ if they persist in provoking the US.”
Dr. Barrett said that it is “a stunning admission from a senior high-level policy adviser here in the US that the US in fact using al-Qaeda, or perhaps the Islamic State [the Daesh/ISIL terrorist group] as well, as assets.”
“This is not something that is normally admitted by officials from Washington, DC, that is that al-Qaeda in Syria, the al-Nusra Front, is actually a US ally,” he added.
Brzezinski wrote that Moscow’s apparent decision to strike CIA’s militants “at best” reflects “Russian military incompetence,” and worst, “evidence of a dangerous desire to highlight American political impotence.” He added that if Moscow continues to target these people, then Washington should retaliate against Russians.
Commenting to Press TV, Dr. Barrett said that “the American people will be very interested to hear that just 14 years after the attacks of September 11th, 2001, which were officially blamed on al-Qaeda – which even then was called by some people al-CIA-duh, having had relationships with the US in the Afghan jihad against the Soviet Union – that this supposedly demonized enemy group that we were told was responsible for killing 3,000 Americans on September 11th, 2001 is now our ally in Syria, and we should to go war with Russia and risk a nuclear war that could end life on the planet in order to punish Russia for fighting against al-Qaeda.”
“It’s kind of mind-boggling that anyone could even imagine the US retaliating  against Russia for Russia’s attacks on al-Qaeda, but that’s precisely what Brzezinski said,” he stated.
“And Brzezinski, for better of course, is actually considered one of the more sensible and level-headed people in Washington, DC which tells you something about other people around him, the neoconservatives who are much crazier than even he is,” said Dr. Barrett, the author of Questioning the War on Terror.
“I guess to explain this, we have just to note Brzezinski’s background; he is from a Polish nobility kind of family background which explains why he hates Russia so much, and has been trying to push aggressive policies against Russia throughout his whole life,” he pointed out.
“But it’s still stunning and disgraceful that when Russia has intervened at the behest of the Syrian government, which is fully legitimate under international law, to shore up that government against these [terrorist] groups like al-Nusra and the Islamic State in order to try to stabilize the situation and lay the groundwork for a kind of peaceful solution, that the response from Brzezinski would be that we need to attack Russia,” Dr. Barrett observed.
presstv.com
That Freddy Krueger looking Old Man above should have been burned at the stake a long time ago. But nobody has got real balls in the Land of the Free and Home of the Brave.
What all of the above peace talks indicate though is the fact that the Cabal is now losing grip on their puppets, and it’s all because everybody in the Eurasian continent, with the exception of a few in the EU, are already on board with the BRICS in creating a better future which the Vatican wants to hijack.