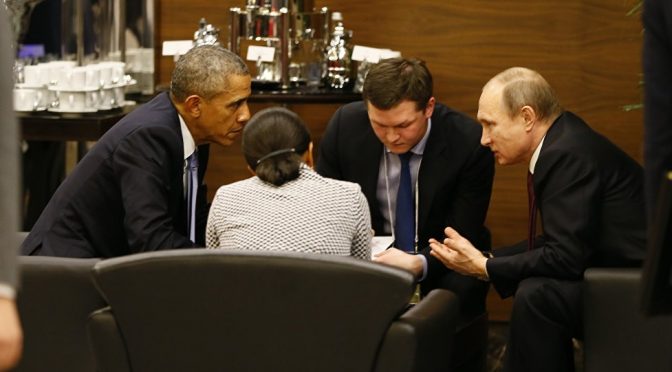 A video captures the two leaders having a serious talk in one corner during a recess in in the ongoing G20 Summit and BRICS meeting in Turkey.
With the recent developments in Sinai, Paris, Syria, Yemen and Libya, we can speculate that they are sharing critical information and will be coordinating their countries response to these events.

What this means is that Obama’s administration may have been working with the Russians all along through State Secretary John Kerry resulting to his attempted assassination, i.e. bike injury, a few months ago.
What gives Obama some gray hair is the uncooperative men and women in the White House notably of course is the group of Victoria Nuland who are taking orders from the Bush camp. This is just one proof that the US presidency is not an all too powerful position in the United States.
A very powerful consortium is working behind the scenes and Obama may be for years attempting to do a Kennedy with the help of capable leaders of other countries, i.e. BRICS,  to increase the possibility of success and it is only now that he is doing it in broad daylight for even the puppetmasters to see.


Bear in mind, Obama did veto the Defense Department budget for lack of provision to close Guantanamo Prison and exerted all efforts to obtain a  peaceful nuclear agreement with Iran. He also denied unfettered aid to the State of Israel. Further to Obama’s credit is the recent report of the death of Libyan ISIS leader.

November 14, 2015 By Kevin Baron
This story is being updated to include breaking news.
The U.S. airstrike in the Libyan front was underway before the Paris attacks began, stressed a senior U.S. official.
The head of the Islamic State in Libya is presumed dead after a U.S. airstrike targeted him early Saturday.
A senior U.S. official told Defense One that the man who goes by the nom de guerre Abu Nabil, or Abu Nabil al Anbari,  was believed to have been killed by the operation, which the official stressed was underway before the Paris attacks began on Friday and was not linked to that event.
The strike would be a significant blow to the Islamic State’s ambitions as the organization, its influence and it’s supply of foreign fighters has spread across North Africa. Libya has been a major concern for French military officials who have lobbied Washington to give that country greater attention due to its proximity to Europe, growing pool of foreign fighters and their potential to cross into Europe.
The U.S. cannot yet officially confirm with 100 percent certainty the identity of their target individual, but the senior U.S. official said undoubtedly that Nidal was “presumed dead.”
The operation began Friday, the one year anniversary of the creation of ISIS’s branch in Libya, the official noted.
Later Saturday, Pentagon Press Secretary Peter Cook released a statement saying, ”On November 13, the U.S. military conducted an airstrike in Libya against Abu Nabil, aka Wissam Najm Abd Zayd al Zubaydi, an Iraqi national who was a longtime al Qaeda operative and the senior ISIL leader in Libya.”
“Reporting suggests he may also have been the spokesman in the February 2015 Coptic Christian execution video,” Cook said. “Nabil’s death will degrade ISIL’s ability to meet the group’s objectives in Libya, including recruiting new ISIL members, establishing bases in Libya, and planning external attacks on the United States. While not the first U.S. strike against terrorists in Libya, this is the first U.S. strike against an ISIL leader in Libya and it demonstrates we will go after ISIL leaders wherever they operate.”
Al Anbari personally was sent to Libya by the Islamic State’s top leader, Abu Bakr al-Baghdadi, as recounted in this CNN explainer from late 2014. The fighter, identified as “an Iraqi ex-policeman turned al Qaeda operative who was once jailed by the U.S. in Baghdad’s notorious Abu Ghraib prison,” by the Wall Street Journal, organized ISIS in Libya with a new wave of terror and attacks on military, government and foreign targets.
“Libya is the province we are most worried about,” said Patrick Prior, senior defense intelligence expert for combating terrorism for the Defense Intelligence Agency, or DIA, at last month’s annual Association of the U.S. Army conference, in Washington. Referring to ISIS spreading across the Middle East, Prior said, ”It’s the hub that they use project themselves across all of North Africa.”
French Defense Minister Jean-Yves Le Drian told Defense One in July that he would not “rank barbarism” in one country over another, but explained why he wanted attention on Libya. “The day some will come from Syria to Libya, they will be 200 miles from the French coast,” he warned, “which is why Libya must be the object of a very strong preoccupation of all of us.”
Defense One Technology Editor Patrick Tucker contributed to this report.
Kevin Baron is executive editor of Defense One. He is also national security/military analyst for NBC News and MSNBC. Baron has covered the military, the Pentagon, Congress and politics for Foreign Policy, National Journal, and Stars and Stripes. He previously ran investigative projects for five … Full Bio
http://www.defenseone.com/threats/2015/11/breaking-us-air-strikes-hit-isis-libya-chief-presumed-dead/123702/?oref=d-mostread
If Obama is indeed working with the Earth Alliance and all those authoritarian laws that were passed earlier during his term will be used against the Nazionists then that is well and good. But this should not be a cause for laxity.

4 thoughts on “Is Obama Working with Putin to Defeat Nazionist Khazarians?”