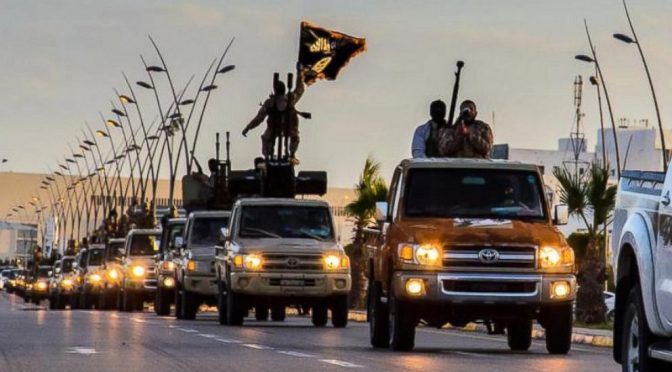 Most politicians don’t want to solve a problem. More than likely, they will seek how they could exploit the situation for their own benefit. The problem about ISIS can’t be solve by politicians especially those who created it.

Obviously, even the Russian surgical bombardments in Syria can’t solve the problem of terror in the Middle East for good. That’s only because terror starts somewhere else.


81% of indicted ISIL suspects are US citizens

The overwhelming majority of terror suspects charged in the United States because of their alleged ties with Daesh (ISIL) are American citizens, new research reveals.
Of the 68 people who have been indicted because of alleged involvement in Daesh terrorism, 55 or about 81 percent are US citizens, including 44 who were born in America, according to a study published this week by Center on National Security at Fordham University.
Eighteen of those individuals have been convicted with an average sentence of more than 10 years.
The data further shows that only three of those indicted in the US were refugees and none came from Syria.

The research comes amid a mounting clamor in the United States over the perceived threat of refugees to national security.
“Law enforcement is being very careful about these arrests. They really don’t see a great domestic terrorism threat here. Of course we know that anything could happen but, compared to abroad, the terrorism threat is really quite low,” said Karen Greenberg, director of the center, according to the Guardian newspaper.
The US House of Representatives has overwhelmingly approved legislation to suspend President Barack Obama’s program to allow 10,000 Syrian refugees into the country.
The measure was approved by a vote of 289 to 137 Thursday, giving it the two-thirds majority the House would need to override a promised veto by Obama. The bill will now go to the Senate.
http://www.presstv.com/Detail/2015/11/21/438559/US-isil-terror-suspects-US-citizens-

‘US generates terrorists from within’

An American political commentator says one should not be surprised at the fact that a majority of Daesh (ISIL) suspects arrested in the United States are of US origin and not from Syria.
“There should be no surprise by anyone that the arrest by the US government of terrorist suspects inside the US would be in the main born in the United States and overwhelmingly US citizens, despite the fear campaign that’s being conducted by a number of politicians,” Don DeBar told Press TV on Saturday.
The comments follow a new research, which has revealed that none of the suspects who have ever been charged in the United States came from Syria.
According to figures published this week by the Center on National Security at Fordham University, the overwhelming majority of the suspects were born in America.
The figures show that among 68 people, who have been indicted because of alleged involvement in the ISIL terror group, only three were foreigners and none came from Syria.
Among those indicted 55 or 80.9 percent of individuals are US citizens, including 44 who were born in the country.
The research classifies more than half arrested of those and charged as “foreign fighters/ aspirants.” Around a quarter are “domestic plotters” and about one-fifth are “facilitators.
“They are young, they are spread over a wide geography, they are impervious to profiling in many ways,” said Karen Greenberg, director of the center.
This is while on Thursday, the US House of Representatives approved legislation to suspend President Barack Obama’s program to allow 10,000 Syrian refugees into the country. Under the proposal, no refugees from Syria or Iraq could enter the US until stricter screening measures are in place.
Debar also spoke of how “the techniques that are employed by the US to extend its power and influence outside of conventional warfare…, end up producing exactly this kind of effect.”
“When you are generating terrorists within the United States to go somewhere else and act as agents of the United States,…then they come back here.”
He added, “None of this should be a surprise. The term that people use, the colloquial term is ‘blowback’ and blowback, of course, is inevitable.”
http://www.presstv.com/Detail/2015/11/21/438588/USborn-ISIL-Syrian-refugees-Daesh-Don-DeBar 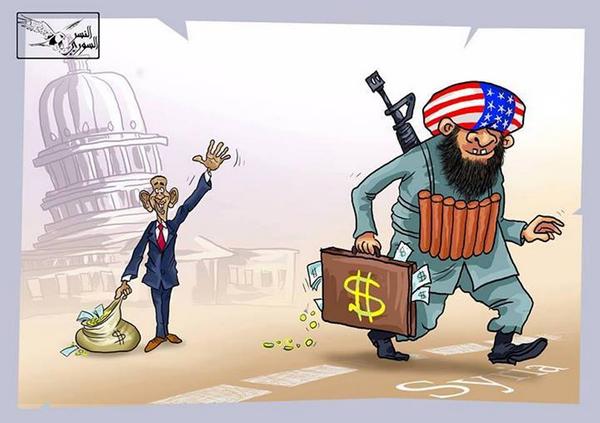 The full neutralization of the Khazarian Mafia is the beginning of the solution to the problem of global terror. The other part of the solution is the total eradication of institutional control of all resources necessary for decent survival.
There is no feasible middle ground approach in all of these. Everyone must be empowered through scientific knowledge and abundance. All forms of suppression and willful manipulation must be stopped.