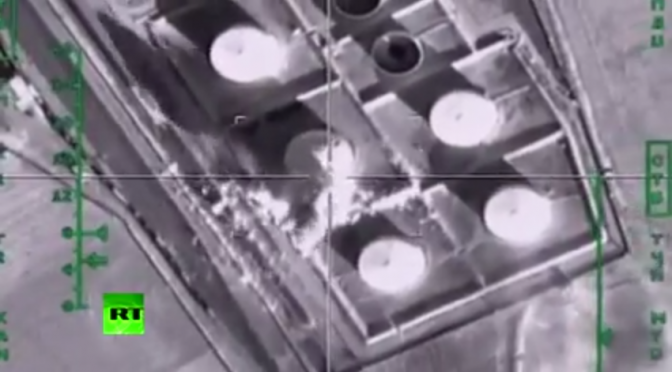 Vladimir Putin’s resolve to disable the Islamic State sources of funds has been proven time and again. Scores of Islamic State controlled oil refineries and thousands of Oil tanker trucks are being blown with cruise missiles and smart bombs.


Those oil tanker trucks that are being destroyed are actually owned by Western companies having a huge stake on cheap oil being smuggled through Turkey and Israel.
Self-financed terror, wars for profit, these are the only game that satisfies the elite psychopaths who embedded themselves inside critical agencies of Western governments.

Russian airstrikes have torched more than 1,000 tankers taking stolen crude oil to Islamic State refineries. This blow against the jihadists comes as the Russian Air Force has hit 472 terrorist targets in two days in Syria, making 141 sorties.
All Russian aircraft have successfully returned to the Khmeimim airbase near Latakia, Major General Igor Konashenkov, spokesman for the Russian Defense Ministry, said in a daily briefing.
In the last two days, Russian warplanes have been conducting active supplemental reconnaissance, inflicting pinpoint airstrikes on newly exposed targets, he added.
“Russian bombers taking off from the Khmeimim airbase flew on combat missions to destroy tanker convoys and oil refineries in the areas of oilfields in the north and east of Syria,” Konashenkov said. “A major oil depot was destroyed 15 kilometers southwest of the city of Raqqa.”
Russian airplanes have destroyed over 1,000 ISIS tankers with crude oil in the last five days, Konashenkov added. Sukhoi Su-34 bombers also hit a terrorist-controlled oil refinery some 50 kilometers south of Raqqa, the unrecognized capital of the Islamic State terrorists.
Russia began counterterrorist operation in Syria on September 30, after Moscow received an official request from Syrian President Bashar Assad. Initially, the military operation was conducted by a task force of more than 50 aircraft and helicopters, including the Sukhoi Su-34 and Su-24M bombers, Su-25 attack aircraft, Su-30SM fighters and Mil Mi-8 and Mi-24 helicopters. Last week, a decision was made to bolster the strike group with 37 new planes, including long-range aircraft carrying out sorties from Russian airfields.
Russia’s Caspian Flotilla ships also delivered two massive cruise missile strikes on ISIS targets in Syria using Kalibr NK ship-born cruise missiles, on October 7 and on November 20. A Russian submarine operating in the Mediterranean also delivered missile strike on ISIS, also using Kalibr cruise missiles.
Probably the most impressive airstrikes were delivered by Russian strategic bombers, which used long-range strategic cruise missiles with conventional warheads, together with huge payloads of bombs dropped on Islamic State’s installations on the Syrian territory.
On November 17, groups of Tupolev Tu-95 (Bear), Tu-22 (Blinder) and Tu-160 (Blackjack) long-range bombers took off from Russian airfields and returned to base after striking the jihadists in Syria.
The decision to augment operation in Syria was taken after the Russian security service, the FSB, reported to President Vladimir Putin that the Russian passenger plane that crashed over Egypt’s Sinai was destroyed by a terrorist bomb.
President Putin has vowed to find and punish the culprits behind the Sinai plane attack. “Our military work in Syria must not only continue. It must be strengthened in such a way so that the terrorists will understand that retribution is inevitable,” he said.

Russian Air Force pilots heading for sorties against Islamic State in Syria have been sending emotional messages to their targets, writing “For Paris” and “For our people” on the sides of the high explosive bombs.
In a recent interview to China’s Phoenix TV Channel, Syrian President Bashar Assad said that Russian airstrikes have turned the tide of the war and the Syrian army is now gaining ground at the expense of the terrorists’ positions.
“After the participation of the Russian Air Force in fighting terrorism, the situation has improved in a very good way, and now I can say that the army is advancing on nearly every front,” the Syrian president said.
https://www.rt.com/news/323065-syria-airstrikes-terrorists-russia/
President Vladimir Putin says he’s shared Russian intelligence data on Islamic State financing with his G20 colleagues: the terrorists appear to be financed from 40 countries, including some G20 member states.
Putin answered some hard questions in this recent interview after the G20 Summit in Turkey…

“You’ll see more truth in this 10 minute news interview below from Russia Today (RT) than in 10 years of watching the liberal Propaganda media machines in the USA! RT just made the U.S. Media look like the disgusting lying pigs that they really are when they aired author Gearóid O’Colmáin in Paris.
… you will never see somebody destroy the lies from the United States in just 10 minutes. This honest man brought out the truth that ISIS is a creation of the U.S. and was funded, armed and trained by the U.S… Moreover… France is knee deep in Syria because they’re following the U.S. and NATO as well as funding other terrorists in Africa and the Middle East.
… notice the difference between RT and Obama’s lying scumbag media in the U.S. such as FOXNews who constantly interrupt their guests when they shy away from their talking points and U.S. propaganda. In this RT interview you get to hear O’Colmáin talk for 10 solid minutes with only a few questions from the host.”