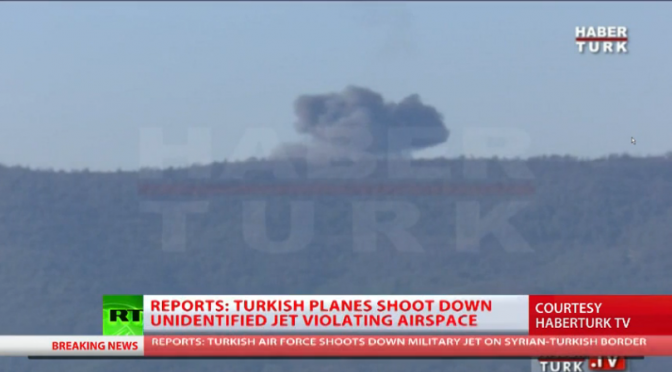 A Russian plane was just shot down by Turkish air force for border intrusion. One of two pilots is reportedly captured by Turkmen. A picture of a dead body has been posted on social media supposedly that of the Russian pilot.
Russia claims the plane was still within Syrian territory.

Also, the fact that a Turkish news camera was ready when the event took place suggests a premeditated plan by the Turks to shoot down any Russian plane operating against Islamic State did exist.

Understand that when these two pilots ejected, there were no signs that any one of them was in distress.

The Turkish border near Raqqah City and  Latakia serve as the lifeline for ISIS.
Obviously, the Turkish government is just waiting for the right opportunity to shoot down one of those Russian planes compromising its investments on the Islamic State.

Even the GuardianUK map indicates the plane was still within Syrian territory. 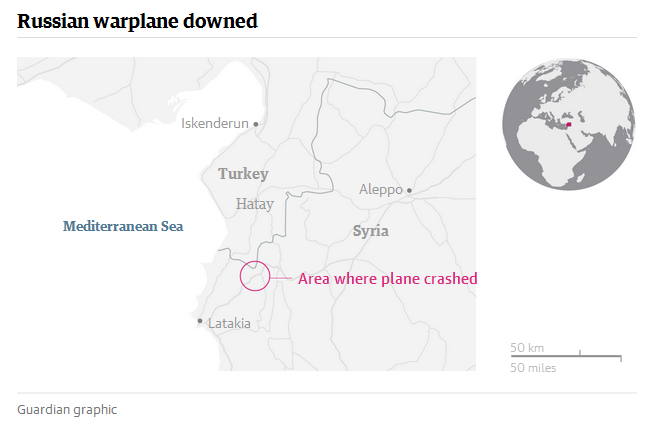 It would be very interesting to see how Putin would respond in the next few days. Remember, 40 countries had been warned beforehand about the upgraded Russian efforts against the Islamic State.
For Turkey to go this far clearly shows its undeniable support for the Islamic State terrorists rather than on the world’s desire to get rid of the latter.
Being a NATO member, any clash with Turkey would draw closer to a BRICS-NATO confrontation. This is what the Washington warmongers are really counting on.

“Su-24 of the Russian aviation group has crashed in the Syrian Arab Republic after alleged fire from the ground,” the Russian Defense Ministry stated.
According to the preliminary reports, the plane was gunned down from the ground.
The Su-24 bomber jet was in Syrian airspace at the altitude 6,000 meters, the Russian Defense Ministry said. The pilots were reportedly able to parachute out of the jet before it crashed.
“The plane was located at an altitude of 6,000 meters. The fate of the pilots is still unknown. According to the preliminary data, the pilots were able to eject. The circumstances of the plane’s crash are under investigation. The Russian Ministry of Defense notes that during the flight the plane was located strictly in the Syrian airspace. It was registered,” the statement read.
http://sputniknews.com/middleeast/20151124/1030638683/russia-syria-turkey-plane-crash.html

A military jet that had reportedly violated Turkish border has crashed in Syria near the Turkish border, media said, adding the jet of unknown origin was shot down by Turkish F16 jets. Two pilots are reported to have ejected.

Habertürk TV reporter on the scene said that the aircraft “turned into a fireball.” Numerous witnesses wrote on social media, saying thick plumes of smoke have been rising from the jet crash site.
The pilots of the crashed jet managed to eject, Habertürk reported, adding that the plane had reportedly violated Turkish airspace.
A Turkish military official told Reuters the jet was warned before being targeted, adding that the nationality of the downed plane is as yet unclear. The official added that the plane was shot down by Turkish F-16 fighter jets.
The plane crashed in a village mostly populated by Syrian Turkmen. The place has been a hotspot between the opposition and the Syrian Army.
Turkish Prime Minister Ahmet Davutoglu has met with officials from the Foreign Ministry. He instructed them to consult with NATO and the UN on the latest developments on the Syrian border, Davutoglu’s office said in a statement.
https://www.rt.com/news/323215-warplane-crash-syria-turkey/
So, what will happen to the multi-billion Turkish Stream project?

One thought on “Turkey Shot Down Russian War Plane for "Border Intrusion"!”