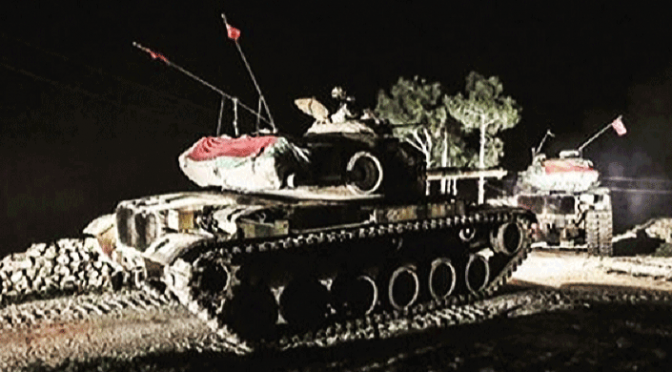 No matter the alibi, Turkey intruded into Iraqi soil just to protect its oil smuggling interests. This barbaric attitude should be condemned by the righteous Western media but they are so silent about it.

Dozens of Turkish armored tanks were deployed into Iraq under the cover of darkness. Yes, Turkey is also now an expert in smuggling entire armored tank division!

Putin was absolutely right when he said just recently that Allah may be punishing Erdogan for whatever he’s doing by taking off his sanity.
This latest Turkish misadventure will add more impetus to the impending Iraqi plan to request for Russian military intervention to fight ISIS in the country instead of the US forces who are reportedly already embedded with “moderate rebels” fighting in Syria.

Iraqi President Fuad Masum says Turkey’s deployment of several hundred troops near Mosul is “a violation of international norms and law.”
Masum said the deployment will raise regional tensions, calling on Turkey to withdraw its forces from the Iraqi territory.
The president also asked the foreign ministry to take the necessary measures to preserve the country’s sovereignty and independence.
Earlier in the day, Prime Minister Haider al-Abadi called on Ankara to immediately withdraw its forces from the Iraqi soil, branding the military presence as a hostile act.
“The Iraqi authorities call on Turkey to… immediately withdraw from Iraqi territory,” a statement from Abadi’s office said, adding that the deployment “is considered a serious violation of Iraqi sovereignty.”
Turkish Prime Minister Ahmet Davutoglu said the deployment of troops does not constitute an expanded military presence in Iraq, also denying that Ankara is preparing for a ground operation into the Arab country.
“The camp in Bashiqa, 30 kilometers (19 miles) northeast of Mosul, is a training facility established to support local volunteer forces’ fight against terrorism,” said Davutoglu, claiming that the camp is not new and the training began after a request from Mosul’s gubernatorial office and in coordination with the Iraqi Defense Ministry.
Turkey claims that the battalion is deployed to train Kurdish Peshmerga forces in their battle against Takfiri group Daesh, which controls Mosul and areas around it. Kurdish military sources have also confirmed the presence as a routine procedure.
However, officials in Baghdad are strongly against uncoordinated deals between Kurds and Ankara, saying it violates Iraq’s national sovereignty.
Abadi has also taken a hard line on the potential presence of foreign forces to allegedly help Iraq in its battle against Daesh, as more of such deployments would undermine efforts made by the pro-government forces to push back the terrorists from their strongholds in west and north of the country.
The Iraqi premier has rejected statements by two US senators who recently called for the number of US troops in Iraq to be tripled.
http://www.presstv.com/Detail/2015/12/05/440411/Iraq-Turkey-troop-deployment-Mosul-