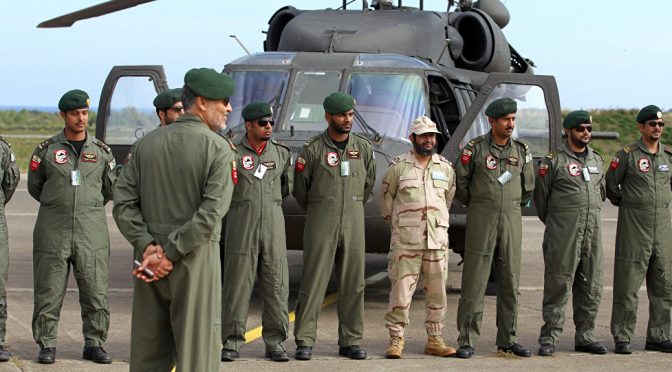 The Nazionist Cabal just launched a two-pronged hijacking of the Russian-led efforts to decisively topple the Islamic State [formerly ISIS and ISIL], so that they could salvage their imagined integrity in the whole geopolitical arena.

Just in time that Kerry is visiting Kremlin to work with Russia again, Saudi Arabia announces a 34-nation Islamic anti-terrorism coalition which includes Turkey. What?

Saudi Arabia announced earlier on Tuesday the formation of a 34-nation Islamic military coalition to combat terrorism, a move welcomed by the United States which has been urging a greater regional involvement in the campaign against the militants who control swathes of territory in Iraq and Syria.

“Nothing is off the table,” al-Jubeir said when asked whether the initiative could include troops on the ground.

A statement carried by Saudi state news agency SPA said the new coalition would have a joint operations center based in Riyadh to “coordinate and support military operations”.

The list did not include Shi’ite Muslim Iran, the arch rival of Sunni Saudi Arabia for influence across the Arab world. Tehran and Riyadh are ranged on opposite sides in proxy conflicts in Syria and Yemen.”

Have they both, i.e. House of Saud and White House, forgotten they were and are still in bed with the Muslim Brotherhood the whole time?
Have they now accepted the fact that no matter what they do they could not outsmart Putin, Lavrov and Churkin?
To put it simply, it’s all public stunt to cover up their growing irrelevance in the region and in the world. It’s amazing how fast these chameleons change their colors on demand , but never their real intentions.
That’s why even the other supposed members of the coalition are confused of what’s really going on. But isn’t it the whole idea to get everybody confused in the first place, even themselves?
This is pure madness.

On Tuesday, Saudi Arabia announced the creation of an “Islamic coalition against terrorism.” The coalition includes 34 nations from across the Middle East, Asia, and Africa, and will be coordinated from a command center in Riyadh.
The true intentions of the new coalition are already in question. The exclusion of Iran has led some to criticize the partnership as a dividing force between the Sunni and Shiite religious factions. Others have labeled the alliance as little more than a hollow attempt by the Saudi government to distance itself from Daesh, also known as ISIL/Islamic State.
But that confusion isn’t limited to outsiders. The coalition’s own members seem to be unclear as to what is expected of them.
Indonesia has expressed alarm over a statement from Saudi Arabia’s Deputy Crown Prince Mohammed bin Salman, in which he described the partnership as an “Islamic military coalition.”
“We don’t want to join a military alliance,” Indonesia’s Chief Security Minister Luhut Pandjaitan told Reuters.
Indonesia’s Foreign Ministry spokesman Armanatha Nasir elaborated, saying that Saudi Arabia had previously argued for the establishment of a “center to coordinate against extremism and terrorism,” without mentioning any military aspects.
“…What Saudi Arabia has announced is a military alliance,” Nasir told Reuters. “It is thus important for Indonesia to first have details before deciding to support it.”
According to Pakistani Senator Sehar Kamran, Riyadh’s announcement of a coalition came as a complete surprise.
“I haven’t seen the news yet,” she said, having learned of the announcement in a Reuter’s phone call seeking her comment. When asked if the motion had been debated in Pakistan’s Senate or National Assembly, she said, “No. Not yet.”
The daily newspaper Dawn also quoted Pakistan’s Foreign Secretary Aizaz Chaudhry as saying he was surprised to find that Islamabad had been formally included in the Riyadh coalition.
Despite the early signs of infighting, Riyadh is standing by its newly formed coalition. On Tuesday, Saudi Foreign Minister Adel al-Jubeir told reporters that member states could take part by contributing financial aid, as well as providing material or security expertise. Military assistance was also mentioned, though Jubeir did concede that more concrete plans are still under discussion.
The US has expressed support for the new coalition.
“We look forward to learning more about what Saudi Arabia has in mind in terms of this coalition,” US Defense Secretary Ash Carter told journalists in Turkey. “But in general, it appears it is very much in line with something we’ve been urging for quite some time, which is greater involvement in the campaign to combat ISIL by Sunni Arab countries.”
Washington’s allies in Europe aren’t so sure.
“The kingdom of Saudi Arabia has been subject to criticism in Europe, and France in particular, with regard to extremism and Daesh,” Jubeir said on Tuesday, “and I think it is based on not knowing the facts.”
Whatever the facts may be, Riyadh may want to inform their teammates.
http://geopolitics.co/2015/12/16/saudi-led-anti-terror-coalition-who-are-they-fooling/
Meanwhile, on the other side of the Eurasian continent, a more progressive meeting is undergoing.

“Thousands of prominent representatives of the governments, international organizations, enterprises, science and technology communities, civil societies will participate in the global forum, according to the conference’s homepage.

The subject of the 2015 conference is “An Interconnected World Shared and Governed by All—Building a Cyberspace Community of Shared Destiny.”

The panelists will discuss such topics as the creation of Internet infrastructure, digital economy development, as well as Internet governance and cybersecurity issues.”

The BRICS Alliance is not only creating its own global development bank, slowly departing from the fiat US dollar and currently establishing the SWIFT alternative, but a parallel internet that is itself free from NSA bulk data gathering.
With the unrelenting military efforts of the Russians against the Islamic State and its oil smuggling sponsors, it’s no wonder that both the United States and Saudi Arabia are forced to pretend as if they are now on the same side as what the world perceived as the better alternative.

4 thoughts on “Saudi-led Anti-Terror Coalition: Who are they fooling?”