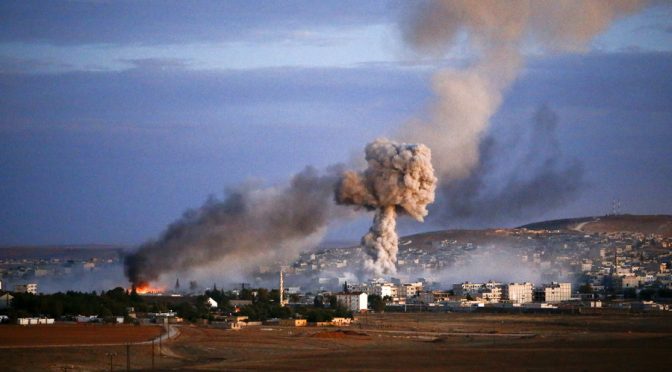 The United States military is known globally for its surgical airstrikes and, with their billion dollar stealth warplanes, they don’t missed their targets ever.
The 55th Iraqi Brigade were scoring high against the Islamic State inside Iraq and it is only prudent for the American forces to eliminate them on purpose. After all, that’s what the US Air Force is for, i.e. to protect and defend the terrorists on the ground securing their oily interests.

This is not the first time that the Enduring Terror Enforcers are receiving their real-time ground intelligence from embedded agents inside ISIS, for them to launch a surgical airstrike minutes later.

This anti-Iraqi offensive comes after the Turks left Northern Iraq amidst international outcry of their illegal intrusion into a neighboring country.

Over 20 Iraqi soldiers have been killed and 30 injured in an airstrike carried out by the US military, Hakim al-Zamili, head of the Iraqi Parliament’s Security and Defense Committee, told Sputnik news agency.
READ MORE: VIDEO emerges purporting to show deadly US airstrike against Iraqi forces
“The 55th brigade [of the Iraqi Army] was hit by the US aviation. More than 20 soldiers were killed and over 30 servicemen were wounded as a result of the airstrike,” Zamili told Sputnik.
Initially, Sputnik reported over 30 deaths in the incident.
The incident occurred near the town of Al-Naimiya in the Fallujah province after the Iraqi troops had freed “a strategically important area” from the Islamic State (IS, formerly ISIS/ISIL) militants, he added.
According to the official, who visited the site of the attack and personally talked to commanders and soldiers of the 55th brigade, the death toll may well rise, as many Iraqi soldiers were heavily injured.

“The Americans carry out airstrikes with 100% precision… How could have they mistaken by kilometers?” he wondered.
Zamili said “it’s very dangerous” that the Iraqi forces are being hit by airstrikes and that the country “won’t allow it” to happen again.
The MP called upon the Iraqi Prime Minister, Haider Al-Abadi, to carry out an immediate investigation into the airstrike.
According to the official, Iraq is going to go to court over the incident as “this crime mustn’t go unpunished.”
However, the Iraqi Army’s Command Centre in Baghdad, the capital, said the air the strike had caused fewer casualties and happened due to miscommunication and bad weather.
“We [Iraqi Forces Command] had demanded aerial support from the international coalition air force. The airstrike was launched without an update on the advance of the Iraqi forces and the coalition forces were unable to distinguish between the fighters on the ground due to bad weather,” it said.
According to the Iraqi military, one Iraqi army commander was killed and nine servicemen were injured in the airstrike.
A Pentagon representative told RIA Novosti they are looking into the report.
Earlier, the Russian Defense Ministry said four Western coalition warplanes had been spotted over the Deir ez-Zor area in Syria on December 6, when a Syrian Army camp came under attack.
An airstrike on a field camp of the 168th Brigade of the 7th Division of the Syrian Army left four servicemen dead and 12 injured. It also destroyed three APCs and four vehicles bearing 12.7mm heavy machine guns.
The information about two pairs of warplanes, members of the US-led international anti-ISIS coalition, which were operating in the Deir ez-Zor area on the day of the attack, was announced by Russian Defense Ministry spokesman Igor Konashenkov.
“If they were not involved in that airstrike, than why are the Pentagon’s representatives, as leaders of the anti-ISIS coalition, hushing up the presence of their allies’ aircraft in the Deir ez-Zor region on December 6? Isn’t it because the [anti-ISIS] coalition air force gets all the information on Islamic State targets in Syria from the Pentagon?” he asked.
The US has been bombing IS positions in Iraq since August 2014. However, according to Iraq’s former PM Nouri al-Maliki, this campaign has been “unbelievably” ineffective in fighting the terror group.
READ MORE: ‘US-led coalition disjointed in fighting ISIS as some members have own plans’ – Iraq’s ex-PM
“It’s unbelievable and unacceptable that more than 60 nations comprising this coalition that have the most modern aircraft and weapons at their disposal have been conducting their campaign in Iraq for 14 months and IS still remains in the country,” he told RT’s Arabic-language sister-channel Rusiya Al-Yaum in November.
https://www.rt.com/news/326420-iraq-us-air-strike/
Even Syrian President Assad estimated that without US help, the Islamic State could be wiped out within a year.

“If the responsible countries take actions against the flood and the flowing of terrorists and the logistic support, I can guarantee that it will take less than one year,” Assad said.

Assad also said that terrorism cannot be defeated without troops on the ground and public support, both of which he has in Syria.

“Less than one year. But the problem is that they are still supporting them on daily basis more and more in order to make it more messy, and to put obstacles in front of any solution, because they want the solution, what they called a political solution, to be ended with the changing of this state, getting rid of this president or depose him, and so on. So, that’s why it will drag on,” Assad added.

According to Assad, supporting anti-Daesh efforts because of fear does not make the participant countries allies of Syria, as unlike Russia and Iran, they did not support Syria when it was battling the less organized al-Qaeda affiliate al-Nusra Front.

Historically,, this thing also happened during Vietnam-American War where the G.I.s were purposely prevented from attacking critical targets and were, at the same time, subjected to occasional bomb misdroppings or friendly fired upon to purposely prolonged the war.
As the recent adage says, “This world will be destroyed, not by the non-conformists, but by those who were just following orders,”