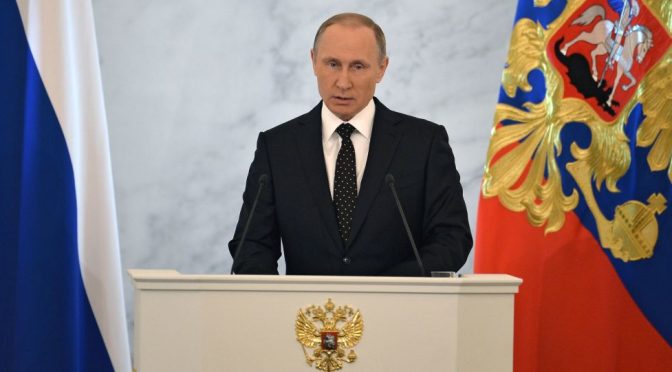 Russian President Vladimir Putin is said to have uttered these bold words in front of a recent gathering inside the Kremlin. This statement is a response to Jacob Rothschild’s calling him a “traitor to the New World Order.”


Born and raised within the sphere of political influence, Putin is a bonafide member of the New World Order.. As a KGB agent he is exposed to the ways of the underworld.
But he is foremost a Russian who when called to save his country by a repentant Boris Yeltsin, he obliged so with flying colors.

He forced the migration of oligarchs into Rothschild’s City of London after the latter were found to have been leeching Russian resources in favor of the Khazarian Mafia. He has kicked out embedded Nazionist agents cloaking as NGOs through strict legislation and enforcement.
Companies like McDonald’s are being required to improve their products and services or be kicked out from his motherland. He has rallied the nation to withstand the effects of economic sanctions by strengthening domestic resources like organic farming and repel the deliberate attacks on the ruble and gas prices by purchasing tons of gold bars and sealing the biggest energy deal with China.

Judging from all his geopolitical decisions and actions so far, we can safely say that he’s definitely on the right track especially in Syria and Iran.
By convincing Syria to destroy its chemical arsenal with a commitment of protecting the Arab country at all cost, Putin has averted the globalist plan to lay a pipeline across Syria that would further empower the enemy of humanity.
Just yesterday, 1,093 more terrorist camps including those “housing experienced instructors” were destroyed via 302 air force sorties.


By forcing Iran and Washington to sit on the negotiation table, Israel’s Likud Party and the rest of the Nazionist factions are put on a defensive corner of geopolitics.
Of course, these BRICS leaders still want to exercise some level of control on their population, but they are not deterring anyone on the road to individual freedom either. They are just laying the groundwork for a collective effort to a better future, something that the next generations can build upon.
A level playing field in the realm of economics and geopolitics is what they are aiming for. It is up to us to remove the motivation for human exploitation completely.
Those who have redefined the word Illuminati from being enlightened to “exceptionalists”, i.e. the privileged few who believe that certain rules don’t apply to them, must be fully neutralized.
One of the significant sources of funds for the fascist Nazionist Jesuit Khazarian Mafia is the healthcare industry which registered a whopping $3.09 trillion in 2014, and is projected to soar to $3.57 trillion in 2017, in the US alone.
We can help take down the Dark Cabal by avoiding drugs, defeat any viral attack and scaremongering easily by knowing how to build our own comprehensive antiviral system. Find more about it here.