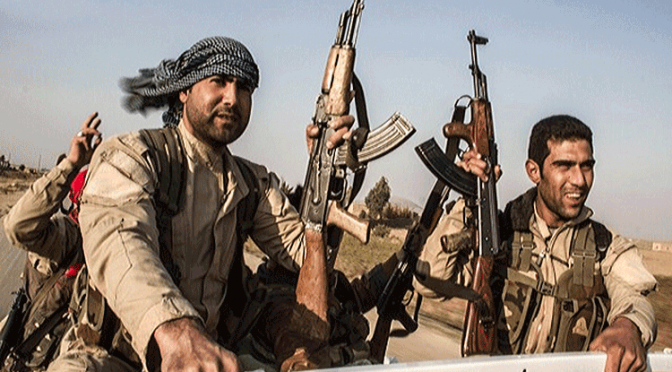 Two days ago, the Syrian Kurdish fighters recovered the town of Azaz from Daesh terrorists which angered Erdogan who subsequently ordered the heavy shillings into the Syrian town, especially at the recovered airport.

This is a blatant disregard of Syrian sovereignty that the United Nations is yet to discuss about and probably will just pay the usual lip service to, if at all. Remember, the UN is yet to say something about the unprovoked downing of Su-24 late last year.
Azaz is one of two towns that sit between the City of Aleppo and directly across the Turkish Kilis border.
The other town much closer to Aleppo is Tal Rifat where a portion of those Syrian Kurdish fighters, obviously ignoring Erdogan’s desperate tantrums, are now engaging in a heavy firefight, and will be pushing through towards the city center in the next few days.

Syria’s Kurdish Fighters at Entrance to Strategic Town in Aleppo

TEHRAN (FNA)- The Kurdish fighters, backed up by the Russian fighter jets, have significantly advanced against the terrorist groups and have now deployed forces only a hundred of meters from the Western entrance of a strategic town North of Aleppo province, battlefield sources said minutes ago.

“The Kurdish fighters have only one hundred of meters to access the Western gate of Tal Rifat,” the sources said.

“A heavy battle is now underway near Tal Rifat and its surroundings,” they further added.

“The militant groups have been surprised by the rapid offensive of the Kurdish fighters and have been pinned down behind their defense lines,” the sources said.

“The Russian warplanes carried out several combat sorties over the militants’ position in the around the town and destroyed their defense lines,” they went on to say.

A report said on Saturday that Turkey’s army shelled Kurdish People’s Protection Units (YPG) positions near the city of Azaz in Northwestern Syria.

Turkish forces started shelling an airbase and a village, recently captured by Kurds, in Aleppo province in Syria.

A Kurdish official confirmed that the shelling targeted the Minaq air base located South of Azaz in Aleppo province.

West of Aleppo is the city of Al-Raqqa, the proclaimed capital city of Islamic State, is where the Syrian Arab Army is also waging aggressive offensives and has now gained very control over strategic heights above western parts of the city.
Another forces are also moving from the south of Raqqa.

“The Syrian army is advancing to the West of the Raqqa province. After heavy fighting against ISIL terrorists, strategic heights have been taken under control,” the source told Sputnik.

Earlier in the day, the Syrian army is poised to advance into the ISIL-held Northern region of Raqqa.

The Syrian government forces and popular units continued to advance on the terrorists’ positions in the Northeastern part of Hama province securing a long chunk of Salamiyah-Raqqa highway.

Currently, the Syrian Armed Forces are approximately 35 km away from the Tabqa military airport — their primary objective in Raqqa at the moment.

The facts on the ground are hard for the mainstream media to swallow but they are beginning to acknowledge some of it. Syrian towns Nubl and al-Zahra in Northern Aleppo province had been occupied by the Free Syrian Army since July, 2012. After their liberation on the February 3rd and following improvement of their living conditions, residents are expressing their gratitude to Russia, Iran and Hezbollah.

Only about two weeks ago, the two strategically important towns were under the control of various rebel factions, including the al-Nusra Front. According to reports from locals, for more than three years they had to conquer fear and learn how to survive without enough aid, but with constant shelling in the background.

The Syrian Army, backed by pro-Iranian militias and Russia, which has been conducting air strikes targeting Daesh positions in the country, was welcomed with open arms by the residents that support the Syrian government and Bashar Assad. Streets are now decorated with posters of Hezbollah leader Hassan Nasrallah and Iran’s Supreme Leader Ayatollah Ali Khamenei along with photographs of the Syrian President beaming down from the front of the town hall in Nubl and hanging outside its main mosque.

“Thank you Russia! Thank you Hezbollah! Thank you Iran!” a resident shouted on the street, as reported by CNN.

All of these combined developments prompted Saudi Arabia to flex its muscles with “Northern Thunder” military exercise as a way of expressing its sympathy to its beleaguered mercenaries who have failed to bring down Assad government.
They must never be allowed to go out alive from the developing cauldron lest they talk about the details of their misadventure.
On the other hand, we don’t believe that the Saudi Army has the minimum skills to defeat the combined battle hardened forces helping the Syrians when it has never been into real ground combat for the last century. They could not even defeat the inferior Houthi rebels now in control in Yemen.
Even if Saudi Arabia is decisive in its desire to prevent the slaughter of ISIS militants, it has to go through the territories of Iraq and Jordan, both countries have a healthy relationship with Russia.
As mentioned earlier, Turkey and Saudi Arabia will attempt to hijack the Russian-led coalition by going into Raqqa first through the “Northern Thunder” military exercise and proclaim themselves as savior of Syria while creating a safe passage for their ISIS mercenaries.

One thought on “Syrian Kurds Blitzkrieg Towards Aleppo City from NorthWest”