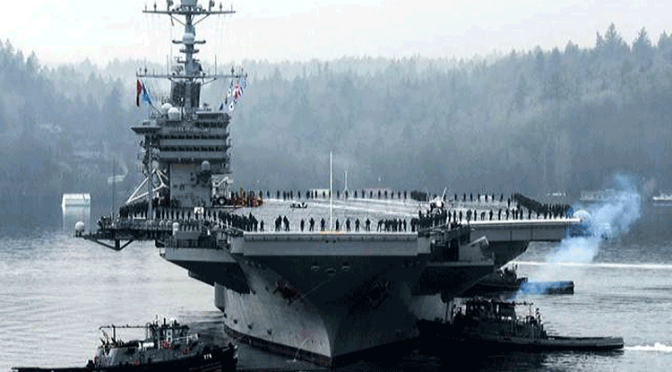 But, there won’t be any long-term battle in the area because the US Strike Group provoking at China’s doorstep will be wiped out in an instant. If that happens, China and Russia will then disable US mainland power grid with an EMP attack, and the unnecessary occupation of foreign forces into US soil will follow to avert a full blown nuclear exchange.
Such a scenario will surely put the Americans to shame for being the “land of the brave and home of the free” only in their American Dream. Therefore, American patriots need to stop this warmongering and bullying by the West against peaceful nations everywhere right now.
Asians are Saying Enough of Western Hegemony
Elsewhere in Asia, Indonesia was also hit by an 8.3 magnitude earthquake [although the intensity was watered down by USGS eventually] because the country is not allowing the further exploitation of their resources by a Western company that is also hosting a covert military base inside the area covered by the expiring mining concession.
To add to the West frustrations, Indonesia is also talking to Russia about the possibility of the latter to supply 10 highly maneuverable S-35 Sukhoi fighter planes to augment the capability of the Indonesian military [here] on top of the Chinese infrastructure investments earlier announced.
The combined progressive developments and non-conformist decisions in Southeast Asia, and the recent suspension of the US military base construction in Okinawa Japan by the Japanese PM himself, are making Washington warmongers restless.

“Construction work on a new US airbase in Japan’s southern island of Okinawa is to be suspended, Japanese Prime Minister Shinzo Abe said on Friday. Abe says the base needs to be built, but will engage in further dialogue with the Okinawa authorities.
“The government has decided to accept the court-mediated settlement plan,” Defense Minister Gen Nakatani said, according to the Kyodo news agency.
The settlement plan was agreed with the Okinawa prefectural government and concerned landfill work, which needed to take place in order for the US military base to be built.”
https://www.rt.com/news/334486-okinawa-military-suspended-japan/

Again, nobody else wants war, and the BRICS Alliance abhors the aggressive foreign policy of the West which is mostly evident in the sheer size of its military budget, not because the BRICS are wary of it but they know that the average Americans are struggling to make ends meet.

“One set of international military spending figures comes from the Stockholm International Peace Research Institute (SIPRI), a think tank. The institute maintains an online database of military expenditures since 1988 for more than 170 countries. By their calculation, the United States spends more than the next seven countries combined.

In 2014, the most recent year available, the United States led the world in military spending at $610 billion, marking 34 percent of the world total, SIPRI found.

U.S. expenditures were nearly three times higher than China, the second-highest nation with an estimated $216 billion in military spending. Russia was in third place at $84.5 billion.

Just imagine if that amount is invested in the repair of grossly dilapidated infrastructures, home construction subsidies, or in industries that once propelled the American nation to greatness.

“… almost every category of U.S. infrastructure is in a dangerous or obsolete state — roads and bridges, power generation and transmission, water treatment and delivery, ports and air traffic control. There is no partisan divide on what is needed: a national initiative to modernize our 50- to 100-year-old infrastructure.

… On a single night in January 2014, 578,424 people were experiencing homelessness — meaning they were sleeping outside or in an emergency shelter or transitional housing program. From 2013 to 2014, a period of ongoing recovery from the Great Recession, overall homelessness decreased by 2.3 percent and homelessness decreased among every major subpopulation: unsheltered persons (10 percent), families (2.7 percent), chronically homeless individuals (2.5 percent), and veterans (10.5 percent)”

So, it is really high time that the Sheeples in the West move their asses up and denounce in the strongest terms possible to bring all troops home and make lasting peace possible everywhere on the planet.
A better global police is already doing effective work on the ground, starting in Syria.