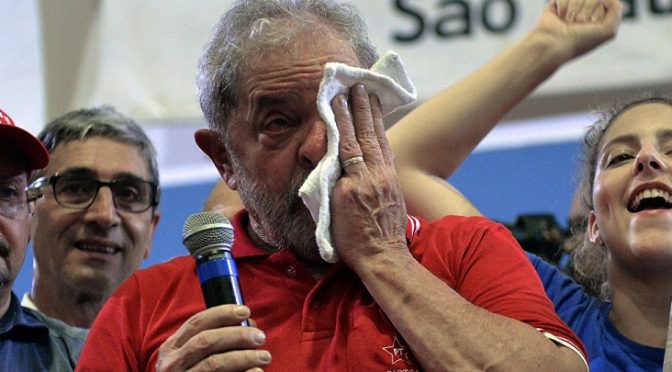 Some Brazilians reacted negatively to our recent article on Brazil who are basically saying that Lula has been a corrupt leader and so his successor President Dilma Rousseff after him.
However, Pepe Escobar, who is currently based in Brazil, is saying that’s not the whole story.

What we can deduce from these two opposing views is the reality that Brazil may now be experiencing what the Philippines exactly had gone through when the strongman Marcos was kicked out from the country and exiled into Hawaii.

In 1986, about 2 million souls tired of Martial Rule flooded EDSA, the main avenue in Metro Manila.
It was in response from the call of the late Cardinal Sin to help Gen. Fidel Ramos and Juan P. Enrile, two key personalities within the Marcos dictatorship who had launched a coup d’ etat to oust Marcos.

Aside from the two cronies, there were other cronies of the late dictator who had greatly benefited from the Marcos rule. They were collectively called as the Rolex 12.
We must understand that the Philippines was, just like other targeted countries, under a CIA attack known as low intensity conflict [LIC], a combination of political intrigue and active insurgency, two methods which the Jesuits are known experts of.
This is what Marcos was trying to defeat with his imposition of the Martial Law.

‘In the Official Gazette report, Marcos said he met with the 12 men “repeatedly, in all-night sessions at Pangarap, Malacañang Park,” five or seven days before the actual proclamation.”

But according to a general interviewed by National College of Public Administration and Governance dean Alex Brillantes Jr., and quoted in his book, “Dictatorship and Martial Law: Philippine Authoritarianism in 1972,” six of the 12 knew of Marcos’ decision to impose martial law two months before the actual proclamation.

Referred to as the “seven wise men” by Marcos’ civilian aides in Malacañang, the group–Marcos himself, Enrile, Ver, Diaz, Montoya, Gatan and Cojuangco–met in early July 1972 at the Pangarap rest house after a party held to celebrate the promotion of some military officers.

Montoya was to implement the declaration of martial law in Metro Manila, Diaz was to direct its implementation in the First PC Zone, and Ver was to handle the “conclave in Malacañang.”

One of the generals noticed Ramos’ absence and asked Ver why he was not included, given that he was a Marcos relative. [Gen. Fidel Ramos graduated from WestPoint Military Academy; later became a consultant to the Carlyle Group after his presidency.]

Enrile also reportedly said Cojuangco was involved because “he was the political leader trusted by the President to supervise the Central Luzon area.”

Another general interviewed by Brillantes said Cojuangco was involved “because he had contact with, and knew how to handle, [Sen. Benigno “Ninoy”] Aquino.”

Ninoy Aquino, who was assassinated on Aug. 21, 1983, was Marcos’ archenemy. His wife, former President Corazon Aquino, is a cousin of Cojuangco’s.

He said that at the time of the Omega 5 meetings, he was PC provincial commander of Tarlac, a hotbed of insurgency and Ninoy Aquino’s home province.’

The strongest proof that it was Cojuanco who ordered the assassination of Ninoy Aquino, his own cousin-in-law, and not dictator Marcos, is the fact that even during the presidential tenures of Corazon Aquino and incumbent Pres. Noynoy Aquino, wife and son of the victim, the mastermind of the death of Benigno “Ninoy” Aquino was never identified conclusively by the courts even when the actual assassins behind bars are already pointing their fingers on Cojuanco.

MANILA — Eduardo (Danding) Cojuangco Jr. was the king of cronies.

Under his friend and mentor, Ferdinand E. Marcos, Cojuangco amassed $1.5 billion in corporate assets through illegal monopolies and massive fraud, prosecutors say. And although it was never proved, President Corazon Aquino reportedly suspected her long-estranged cousin of a role in the 1983 assassination of her husband, Benigno S. Aquino Jr.

… Over a year later, Cojuangco remains not only free but a jarring public reminder of Aquino’s growing political impotence.

His family, including his wife, two children, their spouses, and two grandchildren, returned to the country two days before Christmas when the government finally gave up its effort to deny them passports.

A month earlier, Manila’s anti-graft court gave Cojuangco a resounding legal victory when it lifted a 1986 government order sequestering more than $500 million in stock. The government, which has filed at least eight criminal charges and two civil cases against him, is appealing.

The Aquinos’ are purposely not putting a closure to the Aquino assassination in 1983 to perpetually blame the Marcos family for Ninoy’s death as a deterrence to the Marcoses’ return to power. Besides, blood is a lot thicker than water.

Yes, even within the local Oligarchy, and even within in-laws, there’s a battle raging on for the absolute control of my country. At the same time, outside forces are also feeding the fire for their own vested interests, too, i.e. the plunder of our rich natural resources.
One illustration is the grossly abhorrent US robbery when 22 large crates of valuables were airlifted by US military together with the Marcos family from the Malacañang Palace into Hawaii. The Marcoses may have already returned with the son currently running for the Vice Presidency, but those crates of gold, not cash as mainstream media reported, will never be seen again.
Although we applauded the ouster of the Marcos dictatorship, but with the benefit of hindsight, it turns out that all of those who succeeded the late dictator since 1986 paled miserably to his accomplishments, i.e. massive infrastructure projects to support a fully industrialized country that could have rivaled Taiwan, or Japan today.
This doesn’t mean that Marcos was right all along with his proclamation of Martial Law, which allowed the flow of power into the hands of those who were not specifically trained to exercise it, i.e. poorly trained police force under WestPointer Fidel V. Ramos.
It’s just that all those who succeeded him were too naive and  ignorant about how the covert geopolitical game was played that should have enabled them to counter external pressures and manipulations inherent in every high position of power.
This is the experience we wish Brazilians should take into account when they condemn Lula and not those people surrounding him who were reported to be directly involved in corruption and who might have already become Khazarian conscripts purposely to politically demolish the man. 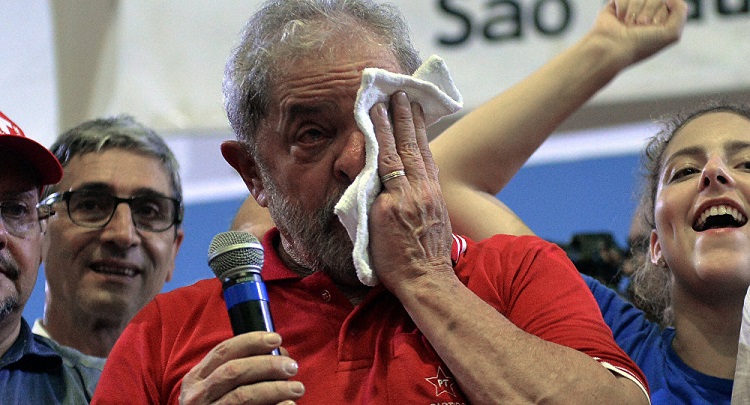 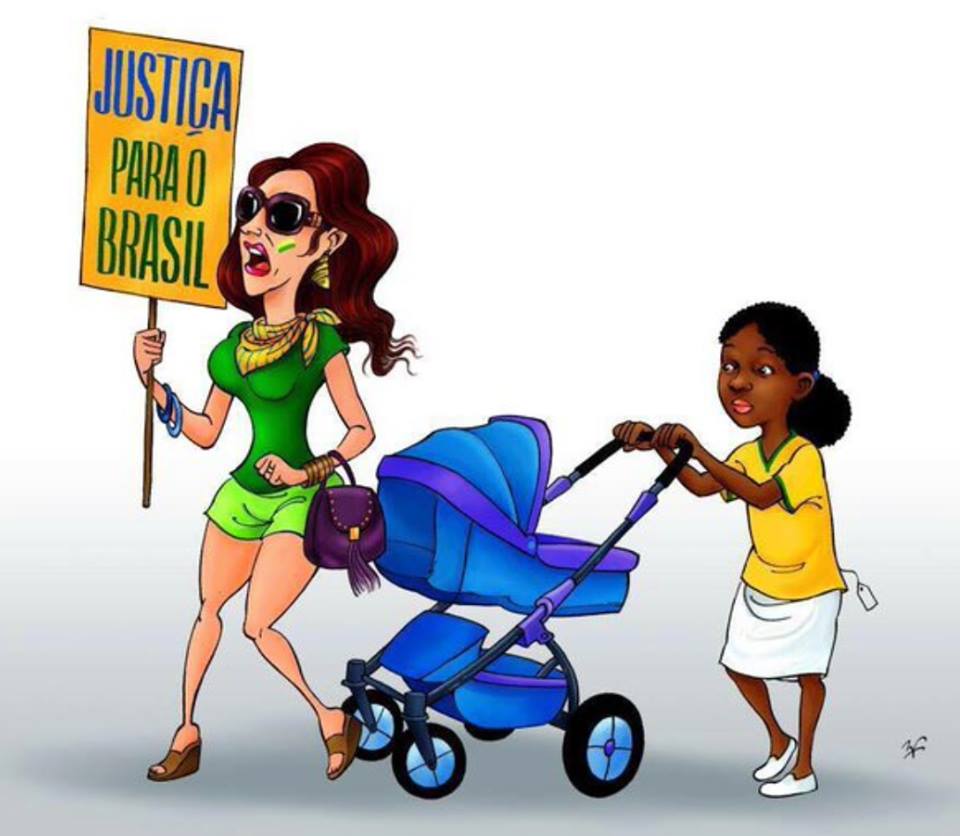 “This is what all of you, around the world, need to know about class struggle in Brazil. It’s based on a pic that has gone viral all over the country – of a middle class couple in Rio joining today’s demonstrations calling for the impeachment of President Dilma. “Justice for Brazil”, yes – and don’t touch my maid.”
https://web.facebook.com/photo.php?fbid=10153954390136678&set=a.10150294029661678.381794.775051677&type=3&theater
Just like Brazil, the Philippines is home to large oil deposits, and deuterium. It is also rich in platinum, gold, nickel, copper, etc. Its capacity to harness these resources for its own benefit must be retarded through “divide and conquer” by an organization deeply embedded within the moral and political fabric in its society, i.e. Jesuits controlled Vatican Church. 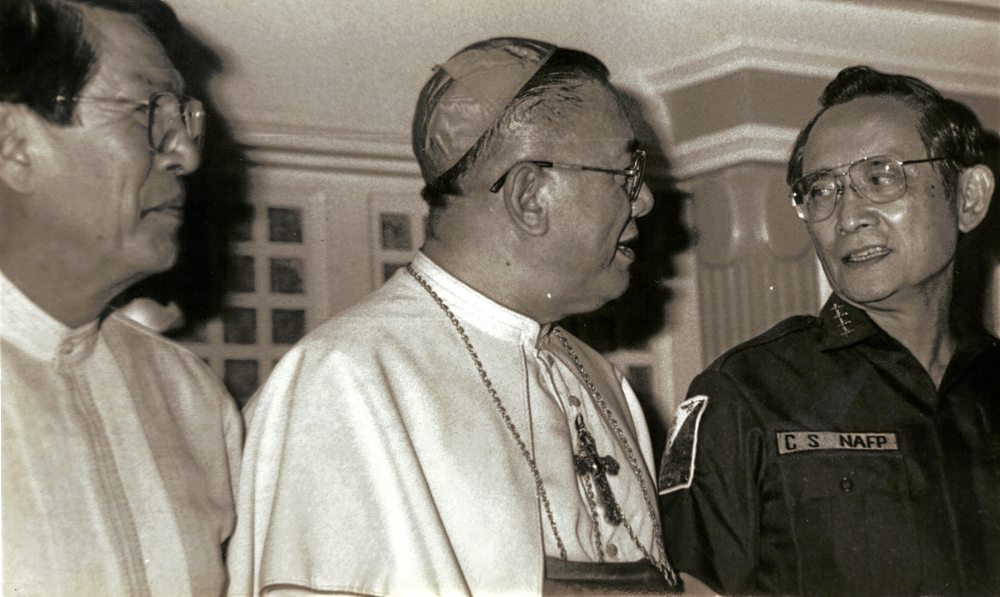 The Jesuits, who benefited greatly from the people’s continued kneeling in their churches, don’t want that economic progress elsewhere but the Vatican. We must be an impoverished nation in Southeast Asia by:

They have succeeded so far.
Here’s Marcos asking the CIA installed president Corazon Aquino to switch on the Bataan Nuclear Plant, the first in Southeast Asia, to help the Philippines gain energy independence from Big Oil Cartel.
https://youtu.be/96Yg-mIP4hI
Cory Aquino chose to mothball the nuclear plant, the construction of which was through a World Bank loan which we continue to pay for even today.
When it comes to politics, there’s no absolutely clean politician. It’s just a choice between two evils. The difficulty is in choosing between them, and most of the time, the people will only realize who the lesser evil was after the damage is already done.
Right now, the people of my country is betting on a Duterte, a man who ruled a city 3 times larger than Metro Manila for the last 22 years, and yet is still living in his poor man’s “mansion”.

Will the people be right?
Only time will tell.
The bigger question above all would be, who will train them the proper way of using power when all of them belong to a church with grossly questionable morality?
In the end, the world that we want is the world that we should create by ourselves, and not by the Middlemen.