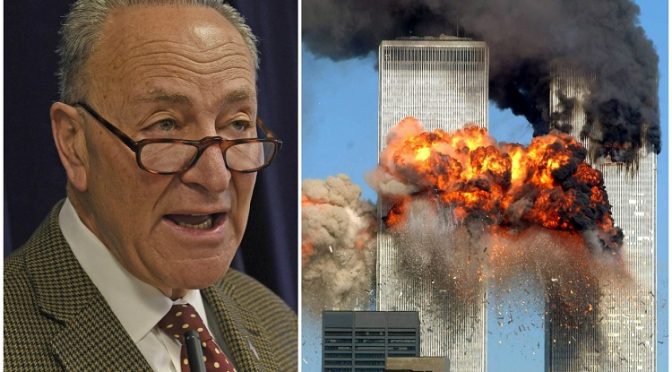 Just as we think that the US Senate has acquired its proper senses when it passed the bill allowing US citizens to sue the kingdom of Saudi Arabia for its supposed involvement in WTC 911 attacks in 2001, a new information has come to fore negating the whole narrative.

Recent reports said, US Sen. Charles Schumer and others had introduced an amendment to the bill at the last minute.

It turns out that just before the vote, Sen. Charles Schumer and other proponents of the Justice Against Sponsors of Terrorism Act stuffed an amendment into the final draft allowing the attorney general and secretary of state to stop any litigation against the Saudis in its tracks.

Yes, JASTA would remove the statutory restrictions that have prevented 9/11 families from taking the Saudi kingdom to court. But Schumer helped craft an entirely new section to the original bill, giving the Justice and State departments the power to stay court action indefinitely. All they have to do is inform the judge hearing the case that the US government has engaged with ­Riyadh in diplomatic talks to resolve the issue.

The quiet, behind-the-scenes watering-down of the controversial bill explains why it passed without a single Republican or Democratic objection. The White House had lobbied senators heavily to kill the bill.

The section that was slipped in at the last minute — “Stay of Actions Pending State Negotiations” — leaves it up to the secretary of state to merely “certify” that the United States is “engaged in good-faith discussions with the foreign-state defendant concerning the resolution of claims against the foreign state.”

The attorney general, in turn, can petition the court for an extension of the stay for “additional 180-day periods,” effectively delaying lawsuits against the Saudis indefinitely.

“September 11 is one of winning cards in the American archives, because all the wise people in the world who are experts on American policy and who analyze the images and the videos [of 9/11] agree unanimously that what happened in the [Twin] Towers was a purely American action, planned and carried out within the U.S.”

This House of Saud retaliation is now putting geopolitical discomfort against Obama who is now in Asia attending G7 summit.
Wherever this developing story leads to, the underlying facts remain the same, i.e. it was the Bush-Cheney clique that were behind the deaths of more than 3000 US civilians on that faithful day and millions more deaths in Afghanistan, Iraq, now compounded with the flood of refugees into Europe.
Additional evidence also shows big interest groups in UK and the Middle East were also complicit to the crime.
To put it simply, the US Neocon’s latest offensive has backfired and this quickly changing narrative suggests that the Cabalist factions are now after each other’s throat.