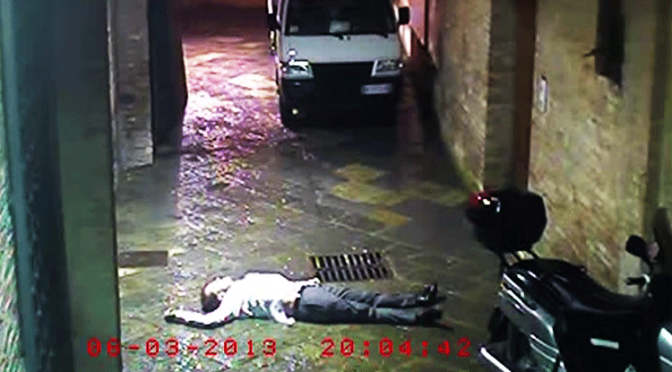 During the massive resignations of banking CEOs around the world in the early part of the year 2012 [here], there’s already a lot of speculations that some of these bad bankers will be executed for abusing the trust of the people by giving themselves huge bonuses after the $15 trillion bailout using taxpayers’ money, among other high crimes.

A year later on February 2013, the unprecedented Papal resignation occurred, further fuelling the belief that a massive global financial reset was afoot. A few weeks later and onwards, several bankers were reported jumping from their penthouses, one after another.
Although some of these dead bankers were holding key management positions, and support groups within the banking industry, i.e. programmers and analysts, not one of them came from the top echelon of the banking industry.
This fact alone gave us a strong basis for concluding that the wrong bankers were actually being suicided.
· Wrong Bankers’ Death
· Wrong Bankers’ Death 2.0
· Wrong Bankers’ Death 3.0
These bankers’ death by “suicide” occurred in the aftermath of the bailout, and during the ongoing investigation of the Libor scandal, among many other scandals at the time.
How the covert operators did it?


Video description:
Published on Jun 14, 2016
The mysterious death of David Rossi, the head of communications for Italy’s oldest bank, Monte dei Paschi di Siena, was initially ruled a suicide. His death came in March 2013 at a time when the bank was teetering on the brink of collapse over numerous scandals and the loss of hundreds of millions of euros through risky investments and complex derivative trades.
Rossi’s family has argued that his death was suspicious. His widow, Antonella, embarked on a two-year media campaign in which she publicly stated that her husband knew too much about the shady goings-on at the bank. Security camera footage obtained by the New York Post shows Mr. Rossi’s apparent suicide, with his body falling from the third-story window of his office into the cobblestone alleyway behind the bank. Italian authorities reopened the case six months ago to investigate allegations suggesting foul play.
Produced by Steven Greenstreet and Heather Hauswirth as part of Michael Gray’s exclusive investigation.
From New York Post,
Rossi was a close confidant of former bank president Joseph Mussari, who was the driving force behind Monte Paschi’s 2008 $7.5 billion takeover of Banca Antonveneta. Many banking analysts agreed at the time that Monte Paschi paid too much in the acquisition that Deutsche Bank financed.
The same year as Rossi’s death, European and US regulators began to probe what would become known as the Libor scandal, in which London bankers conspired to rig the London Interbank Offered Rate — an overnight interest rate that determines the interest banks charged on mortgages and auto and personal loans across the globe. It also determines the rate that banks like Monte Paschi pay for loans like the one it used to finance the purchase of Banca Antonveneta. The scandal would cost international banks — most notably Deutsche — nearly $20 billion in fines.
Additionally, Monte Paschi got involved in risky derivatives that took heavy losses during the financial crisis of 2008. The esteemed bank, founded 20 years before Christopher Columbus crossed the Atlantic, was being investigated at the time of Rossi’s death for its handling of billions in these risky derivative bets involving Deutsche Bank and Merrill Lynch.
In October 2014, Mussari and two other Monte Paschi executives were convicted by Italian authorities for obstructing regulators and misleading investigators on the bailed-out Italian bank’s finances in the wake of the acquisition of Banca Antonveneta. In January of this year, three executives from Deutsche Bank were also implicated civilly, including Michele Faissola, the wealth management director of the German bank — charged by Italian authorities with colluding with the troubled Monte Paschi in falsifying accounts, manipulating the market and obstructing justice. Faissola denies these charges.

While at least 40 bankers have killed themselves in the 17-month period starting in March 2013 in the wake of the global banking scandal, the circumstances of Rossi’s death — and two others — stand out as particularly mysterious.
In January 2014, the body of William Broeksmit, 58, a high-ranking Deutsche Bank executive, was found hanging in his London flat from a dog leash tied to the top of a door.
Financial papers were strewn about, and on a dog bed near the body were a number of notes to family and friends. One was addressed to Deutsche Bank CEO Anshu Jain, with an apology. But that note — never publicly revealed until now — offered no clue as to the reason he was sorry.
Broeksmit’s high-ranking colleague at Deutche was Michele Faissola, who arrived on the gruesome scene after Broeksmit’s wife told his stepson, Val Broeksmit, to phone him. He arrived minutes later, and began going through the bank papers and read the suicide notes.
“He did go to my father’s computer which was, at the time, I thought a little weird,” said Val Broeksmit.

There is no evidence Faissola was involved in any misconduct related to Broeksmit’s death, but the stepson said he still wonders what, if anything, Faissola was searching for. Faissola declined comment.
In emails provided to The Post by his stepson Val, Broeksmit had just messaged friends about his excitement to go on a ski vacation scheduled for a week later.

Although a report from Broeksmit’s clinical psychologist revealed that Broeksmit was “very anxious about authorities investigating areas of the bank at which he worked,” his depression over the Libor investigation the year before seemed to have lifted, according to a doctor who’d given him a clean bill of health a month before his death, said his stepson. Val found other unsettling facts while going over his father’s personal papers and emails.
“Yes he killed himself,” Val Broeksmit told The Post. “But there’s a question: Could it be suicide by extortion, could it be suicide by pressure or saying if you don’t do this, we’re going to do this? There’s a couple suspicions I have.”
In early 2013, Jain planned to make Broeksmit chief risk officer for the entire bank. He was an expert in the esoteric field of derivatives, of which Deutsche had roughly $60 trillion worth on its books. But German banking regulators nixed the appointment because they said he lacked the requisite experience.
Broeksmit left the bank in June, but a few months later took a position in New York as a director of Deutsche Bank Trust Company of America, the US arm of the German banking giant. It was his reward for his long service after butting heads with German banking authorities.
DBTCA was the former Banker’s Trust, which Deutsche bought in 1998. It’s the custodial arm for wealthy clients to park money for trust funds and other long-term investing.

My father was the first to go

Deutsche Bank’s asset and wealth management unit was overseen by Michele Faissola, who along with Broeksmit reported directly to CEO Jain. But unlike most bank directors, Broeksmit’s natural curiosity and work ethic didn’t permit him to just turn up for a monthly meeting and cash a paycheck. He began to dig in, looking at the operation.
“[My father] didn’t just want to show up,” said Val Broeksmit.
A month before his death, William Broeksmit wrote — in what his son says shows his anger — to fellow executives, asking why he should take the lead on the sticky matter of the upcoming Federal Reserve-mandated stress test for the bank.
He also questioned the “generous” loan-loss numbers being used by the bank, afraid that federal regulators would see the bank was losing more on loans than the books showed. Large losses could lead the feds to slap the bank with restrictions.

Calogero Gambino, 41, a Deutsche Bank lawyer, was found hanging from a banister at his Brooklyn house in October 2014.
“Who is recommending that I do this? I am supposed to be an independent director and this puts me further into a role aligned with management,” he wrote.
Two years ago, the mystery of the banker suicides hit New York City. Calogero “Charles” Gambino, 41, a married father of two, was Deutsche’s in-house lawyer for 11 years at the bank’s downtown headquarters. He was working on defending the bank against Libor charges and other regulatory probes.
On Oct. 20, 2014, Gambino’s body was found by his wife, Maria, hanging from an upstairs balcony of his Brooklyn home, a neatly kept white brick townhouse in Bay Ridge with ornamental stone fretwork at the roofline. The rope was snaked through the banister and tied off on the newel post on the first floor.
There was no reported note and his tight-knit family has refused to speak about his death.

I believe he knew too much

The Post reached out to the widow numerous times, only to be told by a Deutsche Bank spokesperson that his wife “did not wish to be disturbed and please remember she has two young children.”
The serious-looking, bespectacled banker was a New York success story — a graduate of St. John’s University and St. John’s Law School who spent two years working at the Securities and Exchange Commission as an enforcement lawyer. He then moved to the white-shoe law firm Skadden Arps as an associate for four years before taking the position at Deutsche Bank, where he moved up the ranks to become an associate general counsel and managing director.
In his work as corporate counsel for Deutsche, Gambino had dealings with many of the bank’s European executives — including Michele Faissola and William Broeksmit.
Mostly it was Gambino’s colleague, outside counsel Mark Stein of Simpson Thatcher, who had the direct contact. Stein, who declined to comment, advised Broeksmit and Faissola in 2012 and 2013 on the Libor probes. Deutsche Bank ultimately reached a settlement with the Department of Justice, paying $12 billion in fines, without any admission of liability.
Gambino’s death was ruled a suicide. In his case and in the cases of both Rossi and Broeksmit, probers never looked for, nor discovered, common threads.
But all three men worked for, or did business with, Deutsche Bank. Moreover, it appears that one or more of the scandals that enveloped Deutsche Bank and/or Monte Paschi since the financial crisis had crossed each of their desks.
It remains to be seen if the circumstances leading to Gambino’s and Broeksmit’s deaths will ever be reconsidered. But questions are being asked and answered in Rossi’s case.
Late last year, Italian authorities exhumed his body and reopened their investigation. A ruling on whether Rossi killed himself or was murdered is expected later this month.
http://nypost.com/article/why-are-so-many-bankers-committing-suicide/
It’s  so clear that the big players in the banking industry were trying to clean their tracks, and their underlings needed to be sacrificed for the “greater good” of the banking mafia.
This is not to say that there were no deaths from the other side of the fence.
· Banking Mafiosi Suicided