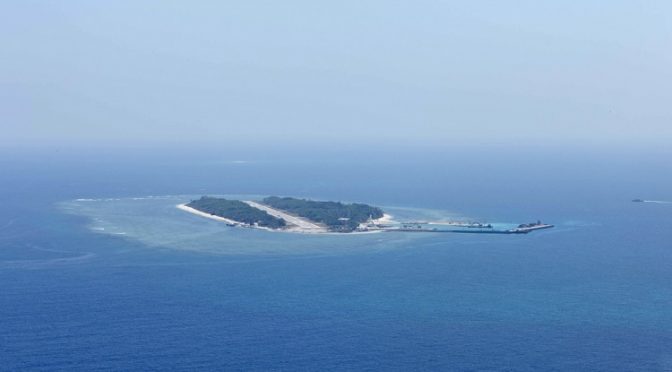 The Philippine government and China are now engaged in preliminary bilateral talks regarding the proper conduct in the West Philippine Sea, yet the United States and other NATO members continue to engage in military provocations in the area, verbally and otherwise.

“France wants to enter the muddled waters of the South China Sea amid growing tensions in the region. Paris said that European navies should begin independent patrols in international waters in the South China Sea to make their presence felt.”
http://www.ibtimes.co.uk/france-wants-european-navies-make-their-presence-felt-south-china-sea-1563989
China is responding to these provocations with a naval exercise of its own, just 4 days ahead of the UNCLOS arbitral tribunal’s decision of the case filed by the last BS Aquino government.


A day prior to the Chinese military exercise, China Ambassador to the Philippines, Zhao Jinhua, paid a courtesy visit to President Duterte to reemphasize Xi Jinping’s desire to collaborate on the peaceful conduct in the region.


This is the third meeting of the two, and just by looking at their body language it’s pretty clear they have established rapport and mutual respect.
Behind the scenes, China is offering the country its assistance in the construction of railways and other economic infrastructures which are badly needed to improve our economic condition, after enduring centuries of multiple foreign exploitations.
Such planned collaboration is not really surprising considering China’s “One Belt, One Road” global economic initiative that is already being implemented across Eurasia and Nicaragua.
https://www.youtube.com/watch?v=akj6dmYqmRg
As Duterte said, if the United States could present a better offer, then the country will stay with its long-time “ally.”
Duterte reiterated his position of engaging China bilaterally, without surrendering historical and legal rights over the Spratly Islands. He implored everybody to never flaunt a favorable UNCLOS decision, but would rather use the “moral victory” as leverage only to foster peaceful behavior among players in the region.


At 4:15 mark, it’s clear to the foreign secretary that the impending UNCLOS tribunal decision addresses only the maritime rights and EEZ definitions of the various features in the disputed area, and will never kick in the US-Philippine Mutual Defense Treaty precisely because the case filed was not about ownership of the Spratlys, but only on its economic rights.


Even the Saligang Batas, or the Philippine constitution. only authorizes peaceful negotiation in resolving cases of regional conflicts, Foreign Secretary Perfecto Yasay emphasized.
So, what exactly the United States is doing with its “freedom of navigation” sorties in the area?
It must be remembered that during the strongman rule of Ferdinand E. Marcos, China engaged the country through peaceful means. There wasn’t any need for militarization in the West Philippine Sea. In fact, we can hardly remember any time in history when Asians were fighting for control over the area.


It is our understanding that China’s current restiveness in the area started only when it was very clear to them that the Aquino government is weak and could not stand against the pressure of the United States military which have resulted to the passage of the Enhanced Defense Cooperation Agreement [EDCA], a treaty agreement concurred to by the Philippine Supreme Court, even without passing through the required legislative deliberation, giving rights to US military forces to occupy any existing military base in the country, a military colonization, by any other name.
Prior to BS Aquino’s term, China didn’t resort to island constructions in spite of the fact that a woman in Gloria Macapagal Arroyo was at the helm. China instead offered to build railways and install a national broadband network which were later on scrapped amidst allegations of corruption and bribery which, as recent events prove, turned out to be false.

More than nine years later, the anti-graft court’s Fourth Division said government prosecutors failed to prove beyond reasonable doubt that Abalos had indeed acted as agent in behalf of ZTE to secure the lucrative contract.

The powerful elite in the country which controls the media can make or break a president, and they disliked Arroyo’s progressive interaction with China for fear of losing their internet service duopoly, and their tight grip on all public utilities that have been privatized, post Marcos.
In short, only a select few, i.e. the pro-Western Oligarchy, and not the majority of the people, is in control of the country… until Duterte came along, who politely refused their multiple attempts of bribery.
The highly accelerated construction of Chinese airstrips in the Spratlys should be analyzed from this standpoint, and in relation to the ongoing war for global control between the BRICS and NATO.
It is an indisputable fact that all of the recent troubles in the Southeast Asia region started only when the United States decided to “Pivot to Asia” after its USS Donald Cook’s Aegis Combat System was rendered useless by Russian electronic weaponry in the Mediterranean. Now, they are resorting to provocative NATO military exercise right at the border of the “aggressive Russian.”
The Cabalist high-profile propaganda machinery is also now in full throttle in both theaters of the hybrid war, and for which Vladimir Putin is giving a stern warning to everyone that Russia will no longer use soft diplomacy in dealing with these provocateurs.
https://youtu.be/8PgSX-WD96Q

Putin railed against the journalists for their “tall tales” in blindly repeating lies and misinformation provided to them by the United States on its anti-ballistic missile systems being constructed in Eastern Europe. He pointed out that since the Iran nuclear deal, the claim the system is to protect against Iranian missiles has been exposed as a lie.

Putin underscored the fact that the real problem is that people don’t understand how dangerous the situation really is now.

Considering the obvious split within NATO members with regards to the proper way in which the alliance deals with Russia, we can say that this only provides more impetus for the Khazarians to amplify the regional conflict they have cultivated here in Southeast Asia.


The Cabalist Rand Corporation published an article that is not only trying to understand and predict China’s possible course of action after the UNCLOS tribunal at The Hague passes its verdict regarding the Spratly Islands, or generally, the disputed features in the West Philippine Sea, but the article also emphasized that should China chooses to ignore the arbitral tribunal’s highly expected unfavorable ruling, it is risking its own international reputation.
More than that, the article also advised that the United States and other actors should, when necessary, “respond diplomatically, economically and militarily. “

“Whether or not China will pay a political price for ignoring the ruling will to a large degree be determined by how forceful other states respond in the aftermath of court action. Public statements supporting the importance of abiding by the rule of law by regional states, the United Nations, Europe and the United States would send an important message to Beijing. If China choses to disregard the ruling as is widely expected, it will be seen by many states as a rising power with little respect for international norms and principles of law. Such disregard will be a matter of serious concern for the many states that want the oceans to be governed by the law under the LOSC, rather than by brute force. Were China to significantly accelerate its foothold in the region by dredging; building facilities, runways and ports, and deploying military assets to disputed features in response to the ruling, the onus would fall on the United States and regional actors to respond diplomatically, economically and militarily.”

However, the recently released Chilcot Report suggests that the West has no moral ascendancy whatsoever to intervene in other people’s business, especially so when it is uninvited.
The strongest motivation that is driving the Khazarian Mafia controlled US military to “pivot to Asia” using the Philippines, Japan and South Korea as its fulcrum is its crumbling fiat economy.
https://www.youtube.com/watch?v=_gA2sGqC6yk
Military records will show that neither of the countries in the immediate perimeter of the disputed body of water has attempted to invade each other for millennia. It’s only those western interests which are polluting the airwaves with “China and Russian aggression” rhetoric that, historically ,have been harassing and establishing their own colonies, one after the other, just for the purpose of exploiting the riches of the region.
Until today, China has never threatened the freedom of navigation of South Korea, Taiwan and Japan, three major suppliers of industrial and consumer goods to the West, and yet the United States is using this as the pretext for naval and aerial maneuvers in the area.
Whatever the UNCLOS case verdict might be, the Philippines stands ready to resolve the conflict, that the West has machinated, through peaceful means, both for practical reasons and for lasting peace in the region.


As far as Duterte is concerned, he understands perfectly well which side is causing all the problems.

Contrary to the prejudice that predominantly-Muslim countries in the Middle East are spreading terrorism, President Rodrigo Duterte accused the United States of “importing terrorism.”

“It is not that the Middle East is exporting terrorism in America. America imported terrorism,” Duterte said told an audience of Muslim Filipinos on Friday during the Mindanao Hariraya Eid’l Fit’r 2016 in Davao City.

Again, both US and NATO military organizations were never invited by any ASEAN member country into the region. We want peace in Southeast Asia.
Stop all forms of intervention NOW, including the planned installation of THAAD missile battery in South Korea that is really targeting China, rather than the rogue Khazarian controlled North Korea.
Above all, we refuse to be used as the diversionary bogeyman to hide, or distract, the American attention to the high level scandal infecting the US government through the Clinton Foundation, as recently leaked by an FBI insider.