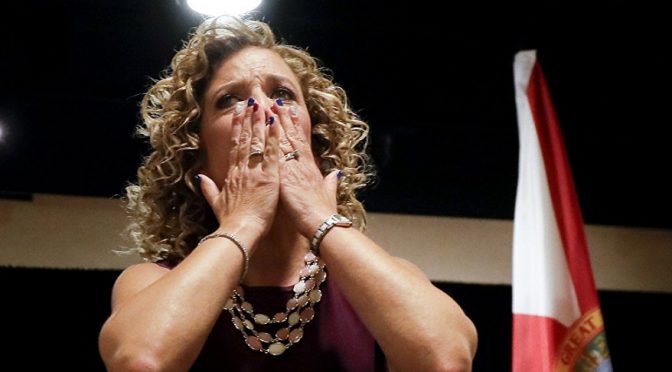 As Julian Assange promised days ago, devastating audio clips were released through the Wikileaks spoiler website about the Clinton-DNC machinations imposed on the Sanders campaign.

The spineless Bernie Sanders, however, was too enthusiastic to endorse Hillary Clinton very early on, and his disillusioned followers are now shifting their support towards the Green Party candidate Jill Stein.


Here’s the favorite from Wikileaks,

“I’m furious about what you are doing for Bernie Sanders,” a caller from the 480 area code, which covers Phoenix, Arizona, said in one voicemail message, listed as file #16014. “He is getting way too much influence. I am on fixed income and I spent over $300 donated to Hillary, and what I see is the DNC bending over backwards for Bernie. And Bernie is the worst person in the world even to be running in a Democratic party because he is not a Democratic. Please don’t give into him. I don’t care about Sanders supporters, most of them are going to vote for Hillary anyway. Quit acquiescing to this person who likes to play the victim card, and who also has been attacking Hillary which gives Trump all his talking points. I will leave the Democratic Party if the Democratic Party continues to coddle Bernie Sanders. Get rid of the a**hole.”
Two calls from the 480 area code complained about the Democratic National Committee’s catering to Sanders, wondering why the DNC allowed Cornell West to join the committee when he was “such trash.”
Most of the voicemail messages were simply leaving names and numbers for a call back, or leaving reminders about conference calls.
One person, calling from the 267 area code of Philadelphia, Pennsylvania, was looking for how to reach the First Lady, Michele Obama. It is file #16663 in the Wikileaks list.
“Someone from the Free Library wanted to know what is the best way to reach contact Michelle Obama with an invitation inviting her to participate in some wonderful event and development relating to the library, and the hospital for children, and some other facilities coming together.
They think it will be right up her alley. How is best to communicate with her? Does she have a secretary? What is the best channel to go through? Thanks so much. Bye.”
Wilikeaks released nearly 20,000 emails this past Friday, showing collusion at the top levels of the governing body of the Democratic Party, which forced the resignation of DNC chairwoman Debbie Wasserman Schultz.
https://www.rt.com/usa/353631-wikileaks-hacked-dnc-voicemails/
The recent anti-Clinton leak effectively spoiled the scheduled Obama statement from the White House.

On the third day of the Democratic National Convention, when President Barack Obama and vice presidential nominee Tim Kaine are scheduled to speak, WIkileaks has released hacked voicemails from top Democratic officials.

The new material from the pro-transparency publisher includes 29 phone calls, totaling about 14 minutes. Many of them are complaints directed at the Democratic National Committee.

Wikileaks founder Julian Assange warned CNN there would be “a lot more material” to come, following the publishing of hacked Democratic National Committee internal emails this past Friday.

The leak starts here.
Meanwhile, the privately owned IRS is reported to be conducting an investigation over the Clinton Foundation profiteering philanthropy, which only benefited the Clintons in more ways than one.

According to an exclusive Daily Caller article,
IRS Commissioner John Koskinen referred congressional charges of corrupt Clinton Foundation “pay-to-play” activities to his tax agency’s exempt operations office for investigation, The Daily Caller News Foundation has learned.
The request to investigate the Bill, Hillary and Chelsea Clinton Foundation on charges of “public corruption” was made in a July 15 letter by 64 House Republicans to the IRS, FBI and Federal Trade Commission (FTC). They charged the foundation is “lawless.”
The initiative is being led by Rep. Marsha Blackburn, a Tennessee Republican who serves as the vice chairwoman of the House Committee on Energy and Commerce, which oversees FTC. The FTC regulates public charities alongside the IRS.
The lawmakers charged the Clinton Foundation is a “lawless ‘pay-to-play’ enterprise that has been operating under a cloak of philanthropy for years and should be investigated.”
… House Republicans singled out Laureate Education and Uranium One as two companies that seemed to have paid lavish sums to the Clintons and later received official government benefits.
Laureate hired former President Bill Clinton as “honorary chancellor,” paying him $16.5 million over five years. The Baltimore-based company, which operates for-profit universities in 28 countries, also donated between $1 million and $5 million to the Clinton Foundation, according to the foundation’s web site.
While Bill was collecting a paycheck from the company and his wife was secretary of state, the International Finance Corporation (IFC), an arm of the World Bank, invested $150 million in Laureate. It was the largest-ever single IFC investment to an educational company. The United States government is the largest contributor to the IFC. During that same period, the Department of State’s U.S. Agency for International Development awarded $55 million to the International Youth Foundation. Laureate CEO Douglas Becker is on the foundation’s board of directors. International Youth Foundation, the Clinton Foundation and Laureate jointly participated in foundation programs.
A Laureate spokesman denied the quid pro quo charges: “Allegations of any quid pro quo between Laureate, the International Youth Foundation and the Clintons are completely false,” she told TheDCNF, adding, “the IFC’s decision to invest in Laureate had no connection to and was not influenced in any way whatsoever by Hillary Clinton.”
The IFC also awarded $150 million to another company owned by Frank Giustra, a close friend of Bill Clinton. Giustra donated $100 million to create the “Clinton Giustra Enterprise Partnership” within the Clinton Foundation. The funds went to Pacific Infrastructure, a company in which Giustra had a significant financial stake. The company was to build a port and oil pipeline in Colombia that was strenuously opposed by environmental and human rights groups because the pipeline sliced through five indigenous villages and forcibly displaced the tribes.
Giustra also was an owner in Uranium One, a uranium mining company with operations in Kazakhstan and in the western United States. Giustra wanted to sell a share of the uranium business to Russia’s atomic energy agency, which required U.S. approval, including that of Secretary Clinton. The Russian investment was approved.
Blackburn added that it appeared the Clinton Foundation — which was tax-exempt only to construct and manage Clinton’s presidential library — never got IRS approval to become a tax-exempt global organization with operations in Africa, Asia, Latin America, the Pacific and the Caribbean.
“In the Clinton Foundation we have a charity that has never filed the appropriate paperwork,” Blackburn charged.
Charles Ortel, a Wall Street analyst who has been investigating the Clinton Foundation, told TheDCNF that the expansion of the foundation into a global giant was not legally approved by the IRS.
http://dailycaller.com/2016/07/26/exclusive-irs-launches-investigation-of-clinton-foundation/
We don’t really think that an orator’s speech could change anything from hereon. Above all, these massive email and audio leaks are evidence enough that the Clinton servers are vulnerable to espionage and she must suffer from it.
Again, what this means is that the Vatican and the god’s banker the Rothschilds, through their own Reuters media network [here] and affiliates, and now their own IRS, too, are disavowing their Nazionist counterparts in the US, the rogue Rockefeller-Bush-Clinton faction, for playing it too rough for comfort, and too obvious that everyone hiding behind the Grand Facade is already exposed for all the world to see.
Aside from the fiat monetary scam and bloodsoaked petrodollar, another significant source of funds for the Nazionist Khazarian Mafia is the “healthcare” industry which registered a whopping $3.09 trillion in 2014, and is projected to soar to $3.57 trillion in 2017, in the US alone. We believe that this is just a conservative figure.
We can avoid using drugs, defeat any viral attack and scaremongering, like the Zika virus, easily by knowing how to build our own comprehensive antiviral system. Find more about how we can kill three birds with one stone, right here.