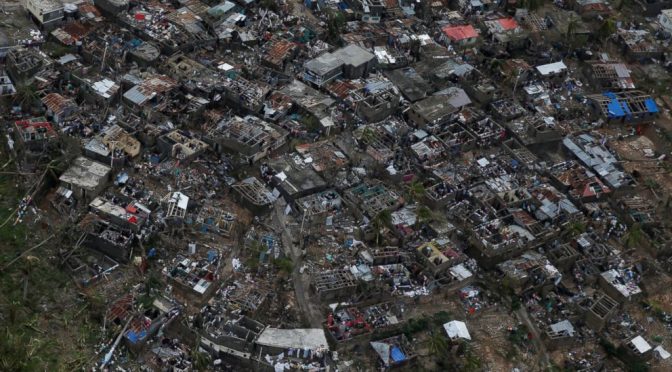 Once again, Haiti is devastated by a natural disaster, this time by Hurricane Matthew.

By Dr. Eowyn
Before the hurricane plowed into the southeast U.S. coast, where it caused major flooding and widespread power outages, “Matthew” had struck Haiti, the poorest country in the Americas, killing 877 people and displacing tens of thousands.
No doubt, there’ll be a drumbeat asking you to donate to Haiti’s hurricane relief, if it hasn’t already begun.
Don’t!
Below are the reasons why.
“In 2010, a massive 7.0 earthquake devastated Haiti, killing more than 200,000 people, leveling 100,000 homes, and leaving 1.5 million people destitute.”
As Dinesh D’Souza recounts for National Review, July 18, 2016,”countries around the world, as well as private and philanthropic groups such as the Red Cross and the Salvation Army, provided some $10.5 billion in aid, with $3.9 billion of it coming from the United States. But very little of this aid money actually got to poor people in Haiti.”

Bill Clinton & George W. Bush inspected the devastation of the Haiti earthquake, March 22, 2010.
According to the National Review:
“Bill Clinton was the designated UN representative for aid to Haiti. Following the earthquake, Bill Clinton had with media fanfare established the Haiti Reconstruction Fund. Meanwhile, his wife Hillary was the U. S. secretary of state, in charge of U.S. aid allocated to Haiti. Together the Clintons were the two most powerful people who controlled the flow of funds to Haiti from around the world.”
Read more about what the Clintons did with the billions of dollars meant for Haiti’s earthquake relief, here.
In 2015, Vice.com sent an investigative reporter to Haiti, who was shocked to find Haiti still devastated 5 years after the earthquake, with many people homeless or living in self-made shacks, without running water or plumbing, despite the $10 billion in relief aid pledged around the world.
https://youtu.be/nlS4SimQfv8
Transcript of the video (selected excerpts):

7:21 mark: “What’s odd is that the Haitians who received little to no foreign aid actually seem to be doing than those in the designated relief areas.

8:06 mark: “But there was one permanent structure that was built here for the earthquake survivors. For some reason the International Olympics Committee [IOC} thought that these people could use an $18 million state-of-the-art soccer field and recreation center [instead of plumbing and running water], adding insult to injury in a community lacking in even the most basic amenities.”

8:32 mark: “But this [the IOC soccer field] wasn’t the only strange reconstruction project we saw foreign aid invested in. Seven hours north of the earthquake, over $300 million of foreign aid was spent in the district of Caracol, [a town that wasn’t affected by the earthquake]…. But even though the town wasn’t affected, it didn’t stop our government aid from being invested in another soccer field [that actually cost $2.9 million to built, not the $300 million spent by the contractor. The State Department’s records say the cost of constructing the Caracol soccer field was even lower — $2.3 million.] And when we looked at the cost of many other projects, we noticed the same contractor kept coming up [– Chemonics, the largest USAID recipient across the world, including in Afghanistan….] There’s been a number of audits that have shown lack of progress, the lack of oversight. Here, this is a contract of Chemonics with USAID. All the cost information throughout the contract, that’s all redacted, and we just have [blank] pink sheet after pink sheet…25 pink sheets [in total].”

11:21 mark: “USAID’s real investment here [in Caracol] is the more than $260 million spent for the Caracol industrial park — the largest U.S. development project in the aftermath of the earthquake…. [T]here’s paved streets, there’s sidewalks, there’s electricity and there’s drinkable running water which is actually unheard of in Haiti. Unfortunately, it only provides roughly only 10% of the jobs it promised. Its main tenant is a South Korean garment manufacturing company which enjoys cheap labor, tax exemptions and duty-free access to the U.S. market. Worst of all, none of the employees we met were earthquake survivors, and the plan for the park was drawn up before the [earthquake] disaster even happened.“

13:17 mark: “While many attempts to reform the system have been made, to date, nothing has changed, and the result is the faileddisaster capitalism we see in Haiti, where aid has become an industry of pro-profit companies. In fact, only a month after the earthquake, our own U.S. ambassador was quoted in a leaked document claiming ‘The gold rush is on.’ And now these same companies are using lobbying groups to ensure reforms never come. It’s often said that waste, inefficiency, corruption, these are problems that are unique to the developing world, that are unique to Haiti. The reality is that these are actually fundamental aspects of the U.S. foreign aid complex. Instead of relying on potentially corrupt money, we simply give it to U.S. companies and allow them to take 25% off the top. It’s a different form of corruption, and without realizing that, we’ll continue to make the same mistakes going forward.”

The standard advice for donating to charities is “Keep it local,” i.e., donate only to local charities where you can keep a better eye on how your donations are spent. 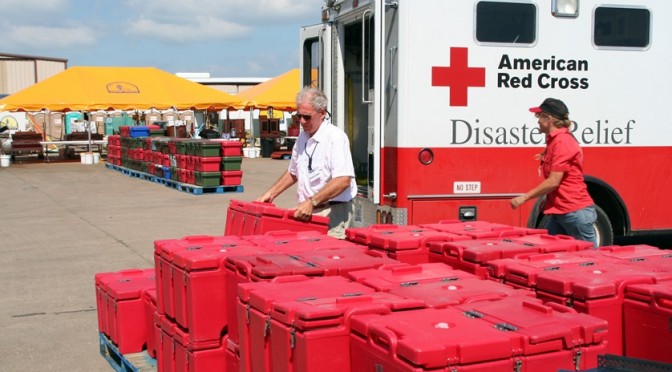 Harriet Agerholm
As the death count after Hurricane Matthew approaches 900 and reports of deadly cholera outbreaks begin to surface, Haitians have sent out desperate pleas for help.
Government officials estimate at least 350,000 people needed assistance after the devastating storm.
Yet accompanying many requests for aid comes a warning – do not give your money to the American Red Cross (ARC).
Trust in the ARC, and in foreign aid more widely, has been badly shaken by a 2015 report that found donations had been squandered.
Despite collecting nearly half a billion dollars to provide relief after the 2010 Haiti earthquake and pledging to build 700 permanent homes, the ARC has been accused of only building six.
“In the coming days, many of you are going to write and ask me how you can ‘help Haiti’,” one woman said on Twitter after the hurricane, “Do not give to the American Red Cross.”
https://www.youtube.com/watch?v=rMylOuTnSJE
She asked people to give instead to Haitian organisations and requested people not send goods that could be sourced locally.
The joint investigation by ProPublica and NPR found rampant mismanagement at the heart of the ARC and charged it with consistent misrepresentation of the success of its projects, particularly in housing.
The group has also been implored to hire more Haitians in its highest ranks.
Responding to the report, the American Red Cross said in a statement it was “disappointed, once again, by the lack of balance, context and accuracy in the most recent reporting by ProPublica and NPR”.
The allegations against the ARC came amid complaints against the failure of the entire international community to manage the 2010 Haitian disaster.
After the earthquake, close to £9bn was pledged to help the country in its recovery.
Yet critics argue that the money was not used so Haiti could be “built back better”, as officials had promised.
Instead, an estimated 55,000 Haitians are still living in tents or other makeshift shelters and few advances in disaster planning have been implemented.
Following Hurricane Matthew, in Grand Anse alone there were 66,000 houses destroyed and a further 20,000 badly damaged, according to Unicef.
Government officials estimate that at least 350,000 people needed assistance, and concern was growing over an increase in cholera cases following widespread flooding unleashed by the deadly storm.
An ongoing cholera outbreak has already killed some 10,000 people and more than 800,000 have been made ill since 2010, when the infectious disease was introduced into the country’s biggest river from a UN base.
http://www.independent.co.uk/news/world/americas/haitians-urging-people-not-give-money-american-red-cross-how-to-help-hurricane-matthew-aid-cholera-a7352681.html
Here are the three highly respectable leaders of the United States asking for help in behalf of the Haitians trying to survive in the aftermath of the earthquake, 6 years ago.
Let’s just pretend that HAARP wasn’t used on this, and the last one.
https://www.youtube.com/watch?v=jta-4JLawYI
The sincerity was overwhelming indeed. Noticeably, Bush Jr. preferred money over water, probably because they’re too heavy to transport. Bill Clinton, however, suggested  a more comprehensive long-term assistance from you of course. Grateful Obama, for his part, acknowledged the “two gentlemen of extraordinary stature” for their help in the relief effort, if indeed there was truly one.
The following video is sent to us by John, showing Haitian senate president exposing the Clinton Foundation for its grossly reprehensible actions in Haiti.

She defrauded the people of Haiti. He spent 4 hours with Bill Richardson to tell Bill Clinton not to invade Haiti. A week later the embassy called him and told him that Bill Clinton has a messenger for him. He came and told him to sign with Bill Clinton, join his movement and Clinton will make him the richest man in Haiti. He told him he is a principled man and he will not sell out. He just challenged Trump to ask Hillary Clinton to publish the audit of all the money they have stolen from Haiti in 2010. He is explaining it very detailed.”