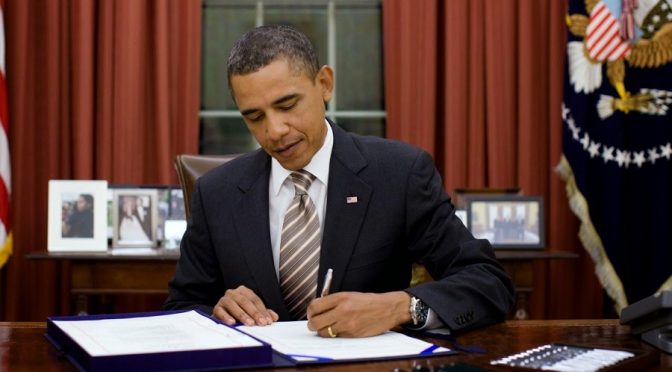 While no one is looking, the outgoing genocidal Obama signed “a legislation designed to help American allies counter foreign government propaganda from Russia, China, and other nations.”

Said law will form part of the FY 2017 National Defense Authorization Act (NDAA), and is expected to “improve the ability of the United States to counter foreign propaganda and disinformation from our enemies by establishing an interagency center housed at the State Department to coordinate and synchronize counter-propaganda efforts throughout the U.S. government.”
From the US Senate website,

Portman-Murphy Bill Promotes Coordinated Strategy to Defend America, Allies Against Propaganda and Disinformation from Russia, China & Others
WASHINGTON, D.C. – U.S. Senators Rob Portman (R-OH) and Chris Murphy (D-CT) today announced that their Countering Disinformation and Propaganda Act – legislation designed to help American allies counter foreign government propaganda from Russia, China, and other nations – has been signed into law as part of the FY 2017 National Defense Authorization Act (NDAA) Conference Report.
The bipartisan bill, which was introduced by Senators Portman and Murphy in March, will improve the ability of the United States to counter foreign propaganda and disinformation from our enemies by establishing an interagency center housed at the State Department to coordinate and synchronize counter-propaganda efforts throughout the U.S. government.
To support these efforts, the bill also creates a grant program for NGOs, think tanks, civil society and other experts outside government who are engaged in counter-propaganda related work.
This will better leverage existing expertise and empower our allies overseas to defend themselves from foreign manipulation. It will also help foster a free and vibrant press and civil society overseas, which is critical to ensuring our allies have access to truthful information and inoculating people against foreign propaganda campaigns.
“Our enemies are using foreign propaganda and disinformation against us and our allies, and so far the U.S. government has been asleep at the wheel,” Portman said. “But today, the United States has taken a critical step towards confronting the extensive, and destabilizing, foreign propaganda and disinformation operations being waged against us by our enemies overseas.
With this bill now law, we are finally signaling that enough is enough; the United States will no longer sit on the sidelines. We are going to confront this threat head-on. I am confident that, with the help of this bipartisan bill, the disinformation and propaganda used against us, our allies, and our interests will fail.”
“The use of propaganda to undermine democracy has hit a new low. But now we are finally in a position to confront this threat head on and get out the truth. By building up independent, objective journalism in places like eastern Europe, we can start to fight back by exposing these fake narratives and empowering local communities to protect themselves,” said Murphy. “I’m proud that our bill was signed into law, and I look forward to working with Senator Portman to make sure these tools and new resources are effectively used to get out the truth.”
NOTE: The bipartisan Countering Disinformation and Propaganda Act is organized around two main priorities to help achieve the goal of combatting the constantly evolving threat of foreign disinformation from our enemies:

In order to “develop, integrate, and synchronize whole-of-government initiatives” the following agencies will be tapped:

https://geopolitics.co/2016/12/06/us-house-bill-6393-passed-to-counter-russian-fake-news-its-repeaters/
What this means is that the Gods of Zion are now considering to scour the various social media networks, and filter out the “fake news”, and guess who will determine what news are fake, or not?
Their own mainstream media outlets and journalism foundations, and the list is very impressive, indeed.
Through this recently signed law, the US government will “establish a fund to help train local journalists and provide grants and contracts to NGOs, civil society organizations, think tanks, private sector companies, media organizations, and other experts outside the U.S. government.” That’s how they will get the necessary funding for 3rd party companies that will censor the web for ‘fake news”.
In fact, in the case of Facebook, Zuckerberg will hire the services of the prestigious Poynter Institute.

“We teach those who teach, as well as students in middle school, high school and college—the journalists of tomorrow. And we teach members of the public, helping them better understand how journalism is produced and how to tell for themselves whether it’s credible.” – Poynter Institute

In order to tackle the enormity of the task of sifting through the billions of web pages which may contain potentially “fake news”, they will automate the whole thing, and with all probability, will implement whatever came out of that “Tech & Check” brainstorming conference they did during the first quarter of this year.

“Tech & Check” will examine current research that automates fact-checking, the promise of live fact-checking and automated annotation, and the institutional challenges of expanding automated work.

If an article qualifies to be a “fake” because it exposes their shenanigans, then it will be annotated, or deleted from the web. After all, in this trying times, one must have access only to relevant and trustworthy information.

“This is the first conference of its kind that combines technologists, academics and journalists to improve fact-checking methods. As we’ve seen in recent months, modern political campaigns move instantaneously on social media and cable news. It’s vital for citizens in our democracy that fact-checking of politicians move at a rapid pace.”

For our sake, the Poynter Institute brought only the best in the business.

“Poynter’s International Fact-Checking Network and the Duke Reporters’ Lab will host “Tech & Check,” a landmark event on March 31-April 1 to explore ways technology can be used to make fact-checking faster and smarter.
The international conference, at Duke University in Durham, North Carolina, will bring together experts from journalism, academia and the tech industry, including IBM Watson, PolitiFact, the Qatar Computing Research Institute, the Tow Center for Digital Journalism, Google, National Geographic, NBC and many more.”

The problem with all of these is simple: the so-called propaganda they are trying to prevent from spreading encompasses, among others, those articles coming from non-Russian independent journalists, and bloggers with direct links to their own intelligence community, e.g. NSA, CIA, NRO and many others. How can this law be used to silence them?
Can they silence Wikileaks? How should they do that with hundreds of Wikileaks site mirrors already in the wings?
It would take a full shutdown of the entire internet before they could end the free flow of information. But even then, it would only be temporary.
Granting that they would be able to do so, how can they implement their biggest project known as Technocratic Dictatorship without the facility of the networks?
They wouldn’t be able to maximize the potential of Artificial Intelligence if none of us is connected to the web. That’s the reason why they will never do it, i.e. shutdown the internet. That’s why, all they could do is censoring the social media, if they can.
In fact, why would the outgoing asshole even sign this bill into law when Donald Trump is already inching his way into the White House?
Does this mean that these people that are still in the White House expect Trump to use this to suppress our constitutional right to the free flow of information, i.e. press freedom, and freedom of expression?
Or, are they hoping that something bad will happen to The Donald?
Bear in mind, The Center will be led by the State Department.
Any piece of information, of course, that will threaten their “way of life” will always be classified as “fake news.”
After all,  if one looks at who is funding Poynter Institute,  he can readily see where this is all going. 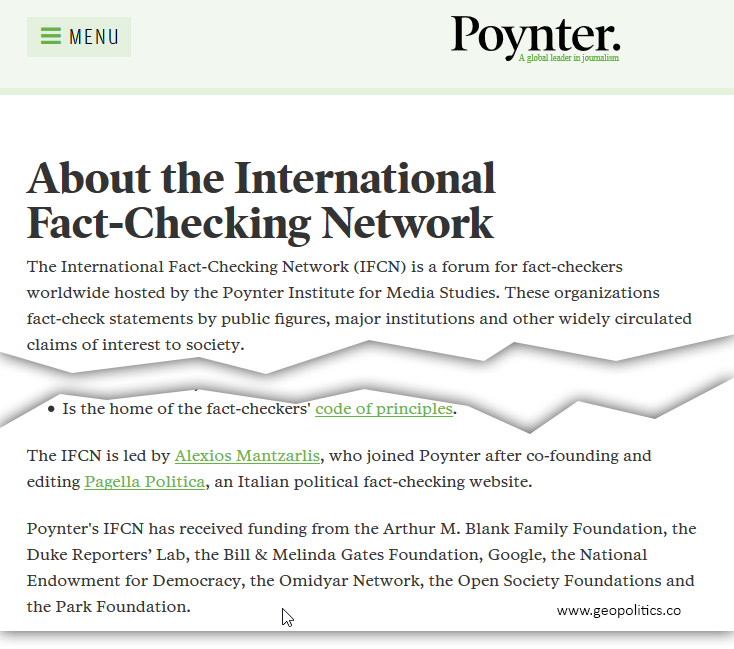 Yes, the usual suspects are at it again, and they are very proud to put their names out in the open, because they can.

The International Fact-Checking Network (IFCN) is a forum for fact-checkers worldwide hosted by the Poynter Institute for Media Studies. These organizations fact-check statements by public figures, major institutions and other widely circulated claims of interest to society.
…Poynter’s IFCN has received funding from the Arthur M. Blank Family Foundation, the Duke Reporters’ Lab, the Bill & Melinda Gates Foundation, Google, the National Endowment for Democracy, the Omidyar Network, the Open Society Foundations and the Park Foundation.
http://www.poynter.org/about-the-international-fact-checking-network/

An extensive list of Soros Open Society Foundations’ funded agencies are listed here.
RT America, whose founder was murdered in Washington DC, could be one of those very few truth-telling media outfits that are still out there challenging the narrative, yet maybe not for very long when the “revolving door of fact-checking” starts working.
https://www.youtube.com/watch?v=WgBei7T704o
More than the classification of articles that we publish online, the participation of the National Reconnaissance Office (NRO), the National Geospatial-Intelligence Agency (NGA), and the Department of Homeland Security suggests that should the gods decide to pick one up, they can do so anytime of the day.

The question now is: should we be intimidated with the angry loser using the full might of the government that the American taxpayers are paying for?
We won’t be.