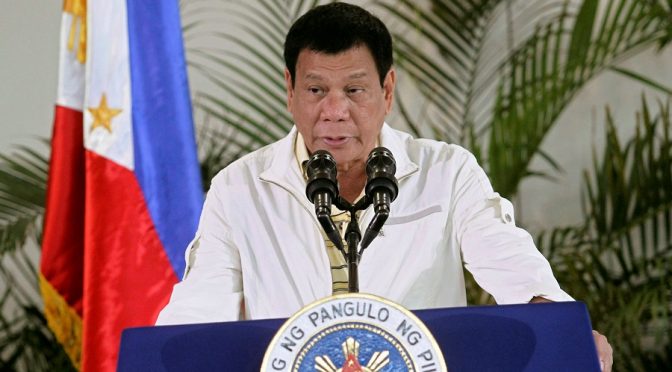 Philippine President Rodrigo Duterte has criticized the Catholic Church for attacking his human rights record, saying it has done nothing for drug addicts in the Philippines except collect money. He then offered his own version of what religion should be.

RT reports,
The spat between the institution and Duterte continues, following a photo exhibition the Vatican staged to commemorate the victims of Philippines violence it says happens by the president’s hand. Duterte, in response, blasted the Church with insults at a Christmas party.

“You say Duterte killer. You priests, you blame me for the deaths of thousands of drug addicts, even those who died in hospitals, you still blame me. But you are the ones who killed Christ.” – President Duterte is cited as saying by the Philippine Star.

Duterte has been assailed from all sides for alleged human rights violations in his drug war, with photographs of street violence and testimonies of summary killings frequently making headlines. But the president believes the Church is doing an even poorer job, which includes ignoring the Philippines’ poverty and drug addicts, while continuing to collect cash at mass.
He also accused the Church of not doing “anything against illegal drugs. They never bothered to help.”
He then suggested an “Iglesia ni Duterte” (Church of Duterte), in which there would be “no prohibition, you can even have five wives. But make sure you are responsible for your problems.”
“The Church is not giving anything even if they collect so much. My statement is full of sarcasm because they [priests] have been criticizing me. They are hypocrites,” he added.
Duterte went on to say he believes in God and Allah, but he is against organized religion, especially the Vatican, because it sows the fear of hell in Christians.

They have not done anything. Where is their God and their grace? There is the hypocrisy of it all.” – Duterte added.

He then went on to bash the United States for its recent criticism – one that cost it all friendly cooperation with the Philippines.
“America did not do anything for the 4 million Filipino addicts. And they even scold me,” he went on.
“Catholic[ism] is a sordid religion. It is about time to show you its history,” he said, mentioning Pope Leo as someone “sired and even had sex with his child.”
The Philippines president meanwhile continues his fight against illegal trafficking of drugs at home. Some $20 million worth of crystal meth was seized in Bukidnon on Tuesday in an intercepted car. The president continues to be criticized for his methods, but insists it is not up to foreigners to interfere in the Philippines’ domestic affairs.
https://www.rt.com/news/372281-duterte-slams-vatican-drugs/
Philippine President Rodrigo Duterte has not just waged a bloody war against drug lords, he is also waging a war against the lord of all mortals, i.e. those who appointed themselves as the shepherds of all mankind, Masters of Mind Programming who have been controlling the way humanity think.
He is living up to the spirit by which the Philippine national hero, Dr. Jose P. Rizal, fought his war for the country’s enlightenment against the folly of accepting norms from a forced religion that the Spanish slave masters have introduced since 1521.


He is imploring everyone to know the true face of the church, and the need to become heroes of their own.
Otherwise, the Jesuit looting in the Philippines will continue.

Philippines Being Ransacked By Jesuits And Vatican, According To Foreign Freedom Fighter

It’s a question of freedom or fascism and Bobby Limeta of the Philippines says the U.S. is the only barrier remaining in the world.
The looting of the Philippines is underway in “full force” by the Jesuit Order, according to foreign freedom fighter Bobby G. Limeta, as he claims the devious Catholic order of militaristic priests are the real culprits behind the New World Order.
“I’m a Filipino and I’m not an American, but I’m deeply concerned that the last barrier of freedom the world now enjoys is the United States,” said Limeta this week from his home in the Philippines, adding he hopes information he has collected about the Jesuits provides a warning to Americans.
“I’ve discovered the diabolic works of the Jesuits since 1990. The more the Americans will be confused about Jesuits & Zionist Jews issues, the better for the Jesuits.  As they smile to the Americans for they have already eaten up the foundation of America “United States Constitution and Bill Of Rights.
“Even our national hero Dr. Jose Rizal the greatest of all Malayan Race, knows the Jesuits well and he did not mentioned Zionist Jews. Now, I never wonder why, if there are Filipino traitors working for the Jesuits-Vatican like Fr. Diaz and Marcos, there’s also American traitors like Ronald Reagan who recognized the sovereign state of Vatican. I’m angry at Ronald Reagan as the Jesuits murdered my favorite American President Abraham Lincoln and my favorite hero Dr. Jose Rizal. But they are not murdered by Zionist Jews.”
As Limeta watches his country being infiltrated by traitors working together with the Vatican, he wants Americans to listen to what is going on in his country, as well as begin understanding the “real story” of the Vatican in order to protect the liberties remaining in America.
“I have a picture of Adolf Hitler taken 1997 at the age of 107 or 108 in Santiago, Chile. Hitler has Parkinson’s disease. And his favorite pastime is painting “Pastel” and always murmuring to himself and sometimes he’s even  scolding himself for what he had done to the millions of people killed during WWII,” said Limeta.
“His wife, Eva Braun,” just died on 1972. I and Ernesto Pinero Suarez , a Chilean, knew this matter long time ago.  And I’m keeping this picture in a safe location where only I know where it is located. The couple escaped via “Vatican Ratline”s and the couple carried gold with them.
Limeta went on to explain how the Jesuits have influenced and infiltrated his country for the benefit of the elite and to the detriment of the common man. He claims the same thing is happening in America but the people are “blinded from the truth” and a well orchestrated disinformation campaign has been protecting the Jesuits and Vatican using their fascist influence to destroy America.
“The Jesuits owned first class schools and universities in the Philippines are teaching Liberation Theology under curriculum 141 Immersion Program, the Zionist Jew are not teaching it,” added Limeta.
“The Jesuit’s Opus Dei and Vatican are the culprits in the looting of our Philippine Gold (a gold different from Yamashita’s looted Asia’s Gold). The culprits OSS/CIA Agent Col. Severino Santa Romana a.k.a. Reverend Father Jose Antonio Diaz (Jesuit’s Opus Dei) and Vatican’s cohorts Ferdinand E. Marcos.
“President Gloria Macapagal Arroyo studied in Edmund A. Walsh School of Foreign Service (Jesuit’s Georgetown University) and his religious adviser is Fr. Romeo “Archie” Intengan, S.J. And somteimes they have secret meeting at the Jesuit’s house in Quezon City.
“GMA’s national security adviser “Norberto Gonzales” is my pinpointed Jesuit Temporal coadjutor. He’s a close friend of Fr. Archie. And our national hero Dr. Jose Rizal’s confessors are Jesuits before he was executed by firing squad. Zionist Jews are not with Rizal. It means, the Jesuits are everywhere and the Zionist Jews.
Limeta went on to explain why he feels the Jesuits and the Vatican are the real culprits of the New World Order, using the Zionist Jews as scapegoats to deflect attention.
“When you analyze the geographic locations of Vatican in Rome it is within seven mountains, exactly what the book of Revelations said. Jerusalem is not,” added Limeta. “Also it mentioned in the Bible that the anti-christ will be a preacher from a religious order and not the Zionist Jew.
“Why are there Jesuit defectors like Alberto Rivera and others, but I haven’t heard a Zionist Jew defectors? Why is the head of the grand tip of masonry the Jesuit Black Pope and not a superior Zionist? For every group or organization there shall be a leader to have direction and perform leadership function. If there isn’t a leader, it will only scatter. Is there a Zionist Jew leader to cover all Zionist Jew affairs throughout the world if any?
“Why are Popes murdered by the Jesuits and not the Zionist Jew. David Yallop did not point his accusations against the Zionist Jews but he point his finger at Cardinal Jean Villot (P2 Lodge member).”
For more informative articles, go to www.arcticbeacon.com

4 thoughts on “Vatican Does Nothing to Help Drug Addicts, Just Collects Money at Mass | Duterte”