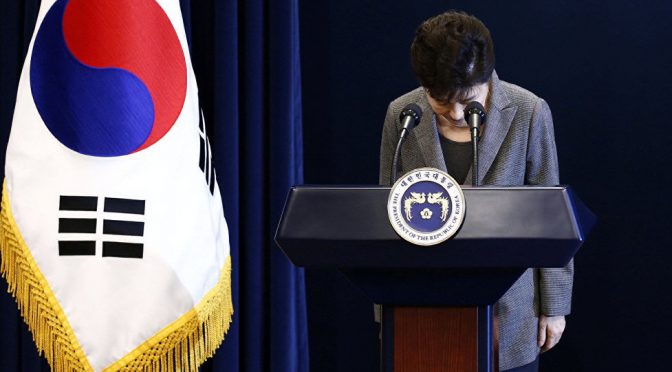 The Washington DC puppet government of South Korea under Park Chung-hee has just been impeached, and local politicians are now forming alliances and blocs to facilitate their assumption to power over the country that has just been under an intensified pressure from the Pentagon to host its THAAD missile system and create an atmosphere of nuclear fear across the region.
For the last several months, Park saw the largest, almost weekly rallies in South Korea’s history against her administration.


Days prior to today, South Korea was also forced to approve the deployment of THAAD missile system even with the ongoing political turmoil.
A sensible military ally shouldn’t have done that, and instead waited for the formal resolution of the problem.
The US THAAD installation is supposedly done as a strong deterrence against North Korea, yet we all know that its real target is ultimately China.

Fortunately for South Korea and the region, the vacancy at the highest office is paving the way for a progressive government lead by Moon Jae-in, 64, who previously lost to Park by a thin margin. His chances of grabbing the presidency has just been elevated.
Ex-UN Secretary General Ban Ki Moon has since withdraw from the race owing to his family’s involvement in corruption scandals and the increasing gap between him and the front-runner Moon Jae-in.
What this all means is that there’s a good prospect that the ongoing THAAD missile system deployment might be retarded so as not to further antagonize the North. A possible resumption of reunification talks with the latter is also possible.
Obviously, this will be a huge loss to the Khazarian Mafia.
Meanwhile, Vietnam is about to inaugurate its first MetroRail transit system that is funded by China as part of the ongoing massive “One Belt, One Road” economic project to revive the ancient Silk Road across Eurasia.

This is all in conjunction to China’s plan to continue augmenting its nuclear arsenal post-THAAD installation in its neighboring South Korea.

We can only imagine what this world would be like if only all resources of the planet are used for peaceful objectives only.