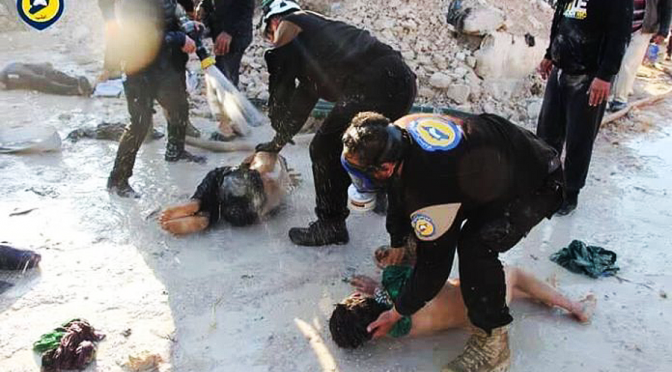 Western terror media and Al Nusra [Al Qaeda] terrorist actors, posing as humanitarian White Helmets on the ground in Syria, are at it again!
A new production has just been premiered for the global audience, and the agenda is pretty clear, i.e. Assad must go, and Trump should make that clear enough instead of allowing countries to just chart their own course for the future.

“Dozens of people, including at least ten children, have been killed in what is suspected to be one of the deadliest chemical attacks in Syria in years, multiple activist groups say.
Airstrikes hit the rebel-held city of Khan Sheikhoun in Idlib province on Tuesday morning, giving off a “poisonous gas,” according to Anas al-Diab, an activist with the Aleppo Media Center (AMC).
The attack, which has been blamed on the Syrian regime by activists and condemned by international leaders, has reportedly left hundreds injured.”

CNN itself is admitting that the event happened in the “rebel-held city of Khan Sheikhoun in Idlib province,” and that’s a problem.
Another problem for CNN and the rest of the terror propaganda media, is that this latest production, like anything else they have produced and peddled in the past, is very poorly executed.

Jumping to conclusions; something is not adding up in Idlib chemical weapons attack

Paul Antonopoulos – 04/04/2017
BEIRUT, LEBANON (4:47 P.M.) – At least 58 people were killed in a horrific gas attack in the Idlib Governorate this morning. However, even before investigations could be conducted and for evidence to emerge, Federica Mogherini, the Italian politician High Representative of the European Union (EU) for Foreign Affairs and Security Policy, condemned the Syrian government stating that the “Assad regime bears responsibility for ‘awful’ Syria ‘chemical’ attack.”
The immediate accusation from a high ranking EU official serves a dangerous precedent where public outcry can be made even before the truth surrounding the tragedy can emerge.
Israeli President, Benjamin Netanyahu, joined in on the condemnation, as did Amnesty International.
But merely hours after the alleged chemical weapons attack in Khan Sheikhun, supposedly by the Syrian government, holes are beginning to emerge from opposition sources, discrediting the Al-Qaeda affiliated White Helmets claims.
For one, seen in the above picture, the White Helmets are handling the corpses of people without sufficient safety gear, most particularly with the masks mostly used , as well as no gloves. Although this may seem insignificant, understanding the nature of sarin gas that the opposition claim was used, only opens questions.
Within seconds of exposure to sarin, the effects of the gas begin to target the muscle and nervous system. There is an almost immediate release of the bowels and the bladder, and vomiting is induced. When sarin is used in a concentrated area, it has the likelihood of killing thousands of people. Yet, such a dangerous gas, and the White Helmets are treating bodies with little concern to their exposed skin. This has to raise questions.
It also raises the question why a doctor in a hospital full of victims of sarin gas has the time to tweet and make video calls. This will probably be dismissed and forgotten however.

Hmm…'Patients are flooding in' YET this 'doctor' (seems the main source of 'gas attack') has time to film, tweet and videocalls…#Syria pic.twitter.com/SfLOfjE2pG

It is known that about 250 people from Majdal and Khattab were kidnapped by Al-Qaeda terrorists last week. Local sources have claimed that many of those dead from the chemical weapons were those from Majdal and Khattab.
This would suggest that on the eve of upcoming peace negotiations, terrorist forces have once again created a false flag scenario. This bares resemblance to the Khan-al-Assal chemical weapons attack in 2013 where the Syrian Army was accused of using the weapons of mass destruction on the day that United Nations Weapon’s Inspectors arrived in Damascus. Later, Carla del Ponte, a UN weapons inspector said that there was no evidence that the government had committed the atrocity. This had however not stopped the calls for intervention against the Syrian government, a hope that the militant forces wished to eventuate from their use of chemical weapons against civilians in Khan-al-Assal.
Therefore, it is completely unsurprising that Orient TV has already prepared a “media campaign” to cover the Russian and Syrian airstrikes in Hama countryside against terrorist forces, with the allegations that the airforces have been using chemical weapons. And most telling, there announcement of covering the use of chemical weapons by the Syrian government, hours before this allegation even emerged…….. Seems like someone forgot to tell him that it would not occur for a few more hours before his tweet.

Orient TV reporter :
"tomorrow we are launching a media campaign to cover the airstrikes on Hama country side including the usage of CW" pic.twitter.com/tZ5SWdnHp7

Meanwhile, pick up  trucks have been photographed around bodies of those killed. Again, it must be questioned why there are people around sarin gas without any protective gear, and not affected at all when it can begin attacking the body within seconds? Also, the pick up trucks remain consistent to what local sources have said that many of those dead were kidnapped by Al-Qaeda terrorists from pro-government towns in rural Hama. 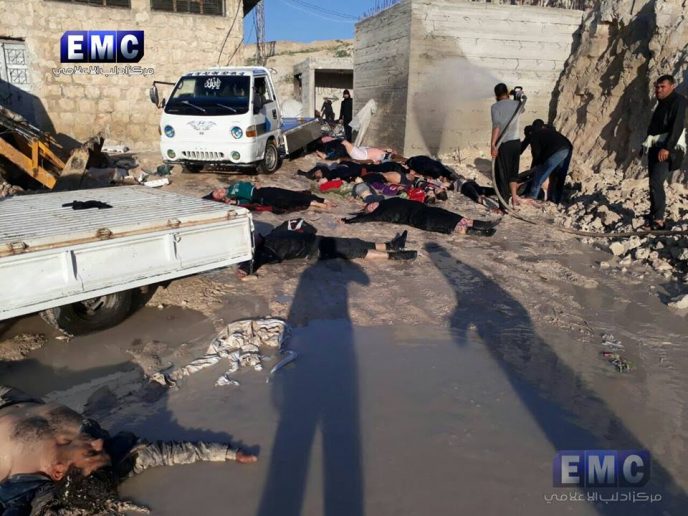 Also, what is brought into question is where the location of the hose is coming from in the below picture, a dugout carved into the rock. This also suggests that the location is at a White Helmets base where there are dug out hiding spots carved into the mountainside and where they have easy access to equipment, as highlighted by Twitter user Ian Grant. 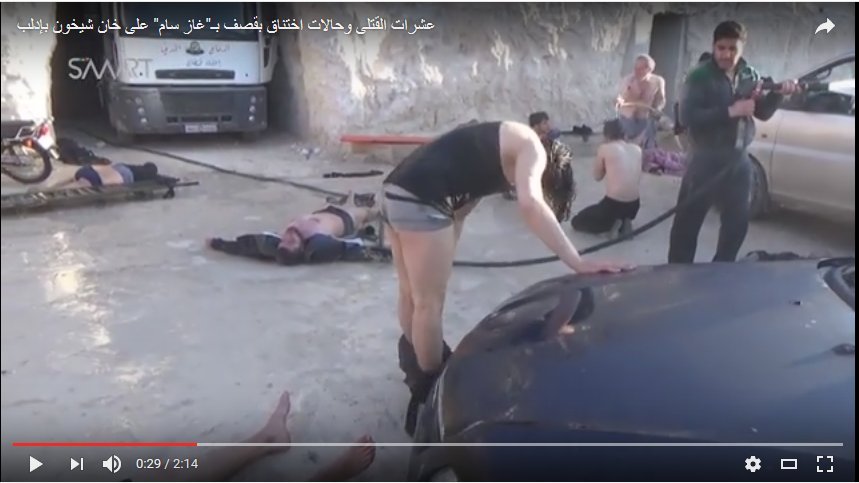 In response to the allegations, the Syrian Arab Army soldiers in northern Hama denied the use of chemicals weapons today. This is consistent with the Russian Ministry of Defense who denied any involvement in the attack.
The army “has not and does not use them, not in the past and not in the future, because it does not have them in the first place,” a military source said. And this of course begs the question:

With the Syrian Army and its allies in a comfortable position in Syria, making advances across the country, and recovering lost points in rural Hama, why would they now resort to using chemical weapons?

It is a very simple question with no clear answer. It defies any logic that on the eve of a Syria conference in Brussels and a week before peace negotiations are to resume, that the Syrian government would blatantly use chemical weapons.
All evidence suggests this is another false chemical attack allegation made against the government as seen in the Khan-al-Assal 2013 attack where the terrorist groups hoped that former President Obama’s “red-line” would be crossed leading to US-intervention in Syria against the government.
Most telling however, is that most recent report shows that the government does not deny striking Khan Sheikhun. Al-Masdar’s Yusha Yuseef was informed by the Syrian Army that the air force targeted a missile factory in Khan Sheikoun, using Russian-manufactured Su-22 fighter jet to carry out the attack. Most importantly, the Su-22’s bombs are unique and cannot be filled with any chemical substances, which is different than bombs dropped from attack helicopters. Yuseef was then told that the Syrian Air Force did not know there were any chemical substances inside the missile factory in Khan Sheikhoun. It remains to be known whether there actually were chemicals in the missile factory targeted by the airstrikes, or whether the terrorist forces used gas on the kidnapped civilians from the pro-government towns and brought them in the lorry trucks to the site of the airstrikes. Whether they were gassed by the militant forces, or the airstrikes caused a chemical weapon factory to explode, the gruesome deaths of children, seen foaming in the mouth because of the gas, lays in the hands of the terrorists.
Therefore, it becomes evident that the area targeted was definitely a terrorist location, where it is known that the White Helmets share operation rooms with terrorist forces like Al-Qaeda as seen after the liberation of eastern Aleppo. Civilians and fighting forces, including Kurdish militias, have all claimed that militant groups which operate in Idlib, Hama and Aleppo countrysides, have used chemical weapons in the past.
So, before the war cries begin and the denouncement of the government from high officials in power positions begin, time must be given so that all evidence can be presented. This is an important factor that has never existed in the Syrian War, and the terrorist forces continue to hope that Western-intervention against the government will occur, at the cost of the lives of innocent civilians.


Poor Bibi must be pulling his disappearing hair again, and it would be a stretch if the Al Nusra White Helmets should win an Oscar again.