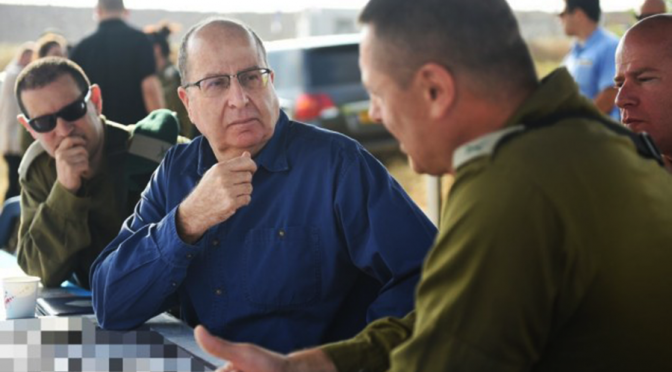 Khazarian Jews are not shy in admitting genocide through terror proxies everywhere because they can, under the able support of their long hijacked corporate US government. They are doing this in Syria and in what remains of the Palestinian lands in Gaza and in the West Bank.

By Stephen Lendman
Washington created and supports ISIS, along with other anti-government terrorists in Syria and elsewhere. NATO, Turkey, Saudi Arabia, Qatar and other regional rogue states supply them with weapons and other material support.
So does Israel. In June 2015, the Times of Israel quoted former Israeli defense minister Moshe Ya’alon, saying

“(W)e’ve assisted (anti-government terrorist groups in Syria on) two conditions. That they don’t get too close to (Israel’s) border, and…don’t touch the Druze.” 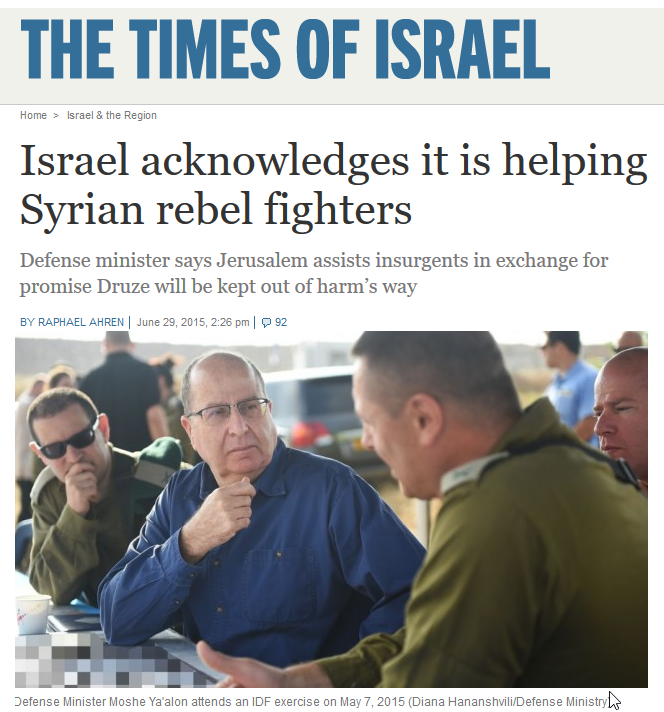 Israel provides hospital treatment for hundreds, maybe thousands, of terrorist fighters, calling it “humanitarian assistance,” according to Ya’alon, adding it’s “not in their interest” to publicize Israeli aid – including weapons and munitions supplied, along with Israeli air strikes, he failed to explain.
On April 24, FARS News reported increased US/UK/Israeli aid to al-Nusra terrorists – aiming “to create an autonomous region in Southern Syria, but the plan is confronted by Iran and Russia’s intensified intelligence and military operations.”
At the same time, Washington supports Kurdish fighters and terrorist groups in northern Syria. “Israel is (providing) logistical, intelligence and medical support for terrorist groups, and the Israel-West-Jordan operations room is supervising (their) activities.”
Russia, Damascus and Tehran oppose the establishment of autonomous regions in southern and northern Syria, supporting the country’s sovereignty and territorial integrity.
On April 24, the American Herald Tribune said

“Ya’alon has admitted to a tacit (Israeli) alliance with ISIS.”

On Israeli television, he said

“(w)ithin Syria there are many factions: the regime, Iran, the Russians, and even al-Qaeda and ISIS.”
“In such circumstances, one must develop a responsible, carefully-balanced policy by which you protect your own interests on the one hand, and on the other hand you don’t intervene.”
“Because if Israel does intervene on behalf of one side, it will serve the interests of the other; which is why we’ve established red lines.”
“Anyone who violates our sovereignty will immediately feel the full weight of our power. On most occasions, firing comes from regions under the control of the regime.”
“But once the firing came from ISIS positions, and it immediately apologized.”

Israel has a longstanding alliance of convenience with regional terrorist groups and rogue states – including Saudi Arabia, Qatar, other Gulf states, Jordan and Egypt.
In December 2014, The Jerusalem Post said a

“UN Disengagement Observer Force (UNDOF) (report) reveals that Israel has been working closely with Syrian rebels in the Golan Heights and have kept close contact over the past 18 months. The report was submitted to the UN Security Council at the beginning of the month.”

Fact: All so-called anti-Assad rebel groups are terrorists. No moderates exist. All commit gruesome atrocities, including CW attacks – toxins supplied by Turkey and Saudi Arabia.
Fact: Pentagon contractors train terrorists in use of CWs. They make some on their own.
Western media suppress what’s most important to know about ongoing war in Syria. The country was invaded. Conflict isn’t civil. All anti-government forces are terrorists. No moderate rebels exist.
Washington, Israel and their rogue allies want regime change, Syrian sovereignty destroyed. Peace talks since 2012 accomplished nothing because Washington and Israel want another imperial trophy, Iran isolated ahead of plans to oust its government.
Russia is the only major power standing in the way of achieving these disturbing objectives. Putin is on the right side of history, resisting imperial lawlessness.

Stephen Lendman lives in Chicago. He can be reached at lendmanstephen@sbcglobal.net.

The Khazarian Jews are justifying this systematic murder by saying that they are doing the killings solely to protect themselves from Iran, Hezbollah, Syria  which did not attack them in the first place.
To say that Palestine did not exist until Israel came is like saying that the 100 million Native Americans did not exist at all prior to the invasion of the Europeans.

No, the existence of Palestinian lands cannot be a subject of a debate, as mere corporate existence of an Israel cannot supplant the true existence of indigenous peoples in all parts of the planet.
Israel’s existence has no historic bearing other than the constant use of terror even today.
Muslims are not terrorists. Those who are occupying privileged positions of  power are.
https://www.youtube.com/watch?v=lRbbEQkraYg