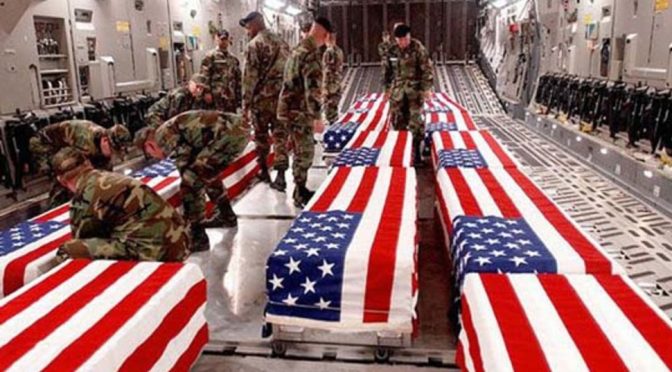 US and NATO forces invaded Afghanistan almost 16 years ago in October 2001. It has been a continuous war marked by US military occupation.
The justification is “counterterrorism”.  Afghanistan is defined as a state sponsor of terrorism, allegedly responsible for attacking America on September 11, 2001.
The war on Afghanistan continues to be heralded as a war of retribution in response to the 9/11 attacks. US troops are still present and deployed in Afghanistan.
The legal argument used by Washington and NATO to invade and occupy Afghanistan under “the doctrine of collective security” was that the September 11 2001 attacks constituted an undeclared “armed attack” “from abroad” by an unnamed foreign power, namely Afghanistan.
Yet there were no Afghan fighter planes in the skies of New York on the morning of September 11, 2001.
This article, first published in June 2010, points to the “real economic reasons”  why US-NATO forces invaded Afghanistan in the wake of 9/11.
Under the Afghan-US security pact,  established under Obama’s Asian pivot, Washington and its NATO partners have established a permanent military presence in Afghanistan, with military facilities located within proximity of China’s Western frontier.  The pact was intended to allow the US to maintain their nine permanent military bases, strategically located on the borders of  China, Pakistan and Iran as well as Turkmenistan, Uzbekistan and Tajikistan.
In recent developments, President Trump in his February 28, 2017 address to a joint session of  Congress vowed to “demolish and destroy” terrorist groups in Syria and Iraq as well as in Afghanistan under a fake counter-terrorism mandate.
According to Foreign Affairs, “there are more U.S. military forces deployed there [Afghanistan] than to any other active combat zone” and their mandate is to go after the Taliban, Al Qaeda and ISIS (which are supported covertly by US intelligence).
There is both a geopolitical as well as an economic agenda in Afghanistan requiring the permanent presence of US troops.
In addition to its vast mineral and gas reserves, Afghanistan produces more than 90 percent of the World’s supply of opium which is used to produce grade 4 heroin.
US military bases in Afghanistan are also intent upon protecting the multibillion narcotics trade.  Narcotics, at present, constitutes the centerpiece of Afghanistan’s export economy.
The heroin trade, instated at the outset of the Soviet-Afghan war in 1979 and protected by the CIA, generates cash earnings in Western markets in excess of $200 billion dollars a year.
“The highest concentration of NATO servicemen in Afghanistan is being accompanied with the highest concentration of opium poppy, ….  That situation causes doubts about the anti-terrorist mission and leads to the conclusion about catastrophic consequences of the eight-year stay [of coalition forces] in Afghanistan,” (Russia’s Federal Drug Control Service head Viktor Ivanov, January 2010)
Michel Chossudovsky,  August 22, 2017

The War on Afghanistan is a Profit driven “Resource War”

11 thoughts on “War Worth Waging: Afghanistan’s Vast Reserves of Minerals and Natural Gas”