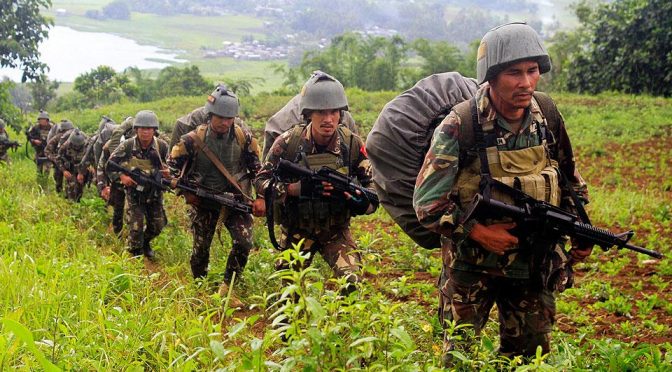 With the full cooperation of its ASEAN counterparts and the timely assistance from Chinese authorities, the Duterte government has finally recovered the entire Marawi City when the Philippine military confirmed the deaths of Abu Sayyaf leader Isnilon Hapilon and Maute group leader Omar Maute.

Hapilon and Maute were both killed during a rescue operation by government troops in Marawi City, which has been a site of fierce firefight and aerial bombings since May 23. The Maute patriarch died while under ICU confinement after complaining of severe pain, 2 months ago.

“Ladies and gentlemen, I hereby declare Marawi City liberated from the terrorist influence that marks the beginning of the rehabilitation,” Duterte said.
The killing of two terrorist leaders in Marawi City is seen to bring peace and economic development in war-torn Marawi City and the rest of Mindanao, as the government has been preparing in the last few months for the rebuilding of the city, in full cooperation with the local business community.
“Good! Now we will finally have peace in Mindanao!” Vicente Lao, chairman of the MBC, said in a text message Monday, reacting to the deaths of Abu Sayyaf leader Isnilon Hapilon and Maute group leader Omar Maute.
With this development, Lao said the business community in Mindanao is optimistic that the region will soon see growth.
“Now the Muslim areas can experience growth and investment like the rest of the country,” he said.
The Philippine military operation against ISIS in Marawi costs $70 million to date. More than 300,000 Filipinos have been displaced by the fighting, which authorities say has killed 824 rebels, 47 civilians and 162 military.
A military mop-up and clearing operation is underway. Some remaining leaderless terrorists are still holding about 20 hostages.

Commandos who killed Isnilon and Omar tell their story

Zam Yusa
KOTA KINABALU: The commando group that killed the Islamic State (IS) terror network’s Southeast Asian emir Isnilon Hapilon and fellow militant leader Omar Maute have given a detailed account of the dramatic ambush at Marawi city recently.
The surprise attack on the duo in the southern Philippine city was carried out past midnight on Monday by the Philippines’ 8th Scout Ranger Company.
In the heat of the action they did not even know who they had killed until sunrise, reported cdodev.com, a community website of Cagayan de Oro city.
It said the company’s leader, who addressed himself only as “Destroyer”, had given the account of what happened in Tagalog on its Facebook page.
Two teams of the ranger company were positioned at both ends of a road following intelligence from escaped hostages that some of the terrorists who had invaded the city would be using the path to escape the Philippine forces’ dragnet.
Each team was equipped with an armoured vehicle and thermal night-vision capability.
At around 1.30am, the rangers opened fire upon seeing one of the militants passing the road, killing him. Not long after, another terrorist along the same path was also gunned down.
A few of their fellow militants tried to recover the downed men only to be met with shots fired by the commandos which sent them fleeing.
The commandos only retrieved the two bodies at dawn.
Some female hostages who had escaped from the terrorists then identified the remains as belonging to Isnilon and Omar.
“The rangers shouted in jubilation,” the cdodev.com report said. “They couldn’t believe the men they had killed were the highly sought militant leaders.”
Both Isnilon, who was also wanted by the Eastern Sabah Security Command (Esscom), and Omar had reportedly offered a huge sum of money to some hostages to arrange a boat for them to make a getaway.
Destroyer also said a photo of the company in front of a damaged building in Marawi uploaded with the Facebook posting was in honour of their colleagues “who were lost”.
“Almost half of our company was lost. They were either killed or injured,” he said.
A former Malaysian army commando, who is now a security consultant told FMT that the company had used a standard “flanking” ambush technique.
“It’s good that the rangers had had reliable intel on the enemy’s planned move, so they could place their attacking elements in the best flanking positions.
“With the flanking system, enemies have nowhere to go when under fire, except back the way they come, if they can do so in time,” he said on condition of anonymity.
Philippine president Rodrigo Duterte today announced that Marawi city had “been liberated from terrorists”.
Military spokesman Maj Gen Restituto Padilla said 20 to 30 terrorists, whom he called “stragglers”, still remained in the city.
This number included six to eight foreign nationals, including Malaysia’s most wanted terrorist Mahmud Ahmad, who is suspected to have arranged financing for the militants’ siege on the city which began in May.
Padilla also said that the terrorists still held some 20 hostages.
The government said operations were ongoing to get the remnants of militants, including Mahmud, who has been touted to succeed Isnilon as the IS’ emir for Southeast Asia.

5 thoughts on “ISIS Operations in the Philippines Failed; Maute Brothers Wiped Out”