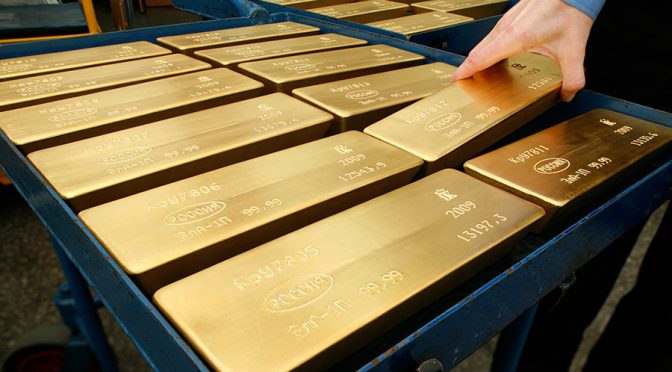 The BRICS counties are considering starting an internal gold trading platform, according to Russian officials. When this happens, the global economy will be significantly reshaped, and the West will lose its dominance, predicts a precious metals expert.
In 2016, 24,338 tons of physical gold were traded, which was 43 percent more than in 2015, according to Claudio Grass, of Precious Metal Advisory Switzerland.
Gold moving from the West to the East
“We have to put the BRICS initiative into a broader context. It is just part of a geopolitical tectonic shift which started decades ago. We have seen a constant outflow of physical gold from the West to the East. At the same time, the West has lost the economic war, and as a consequence, the focus now turns to the financial system. China dominates the world economy and has displaced the US as the world’s most formidable economic powerhouse,” he told RT.
The creation of a new gold standard by BRICS is also a step to end the US dollar’s domination of the global economy
“As Bejing and Moscow understand that America used the dollar to control the world, by implementing a new kind of ‘Gold standard 2.0’ they want to distance themselves from this control. Furthermore, the vast majority of the people in Asia sees gold as superior, or ‘real’ money, something the West has forgotten, because of all the paper wealth (credit) they have accumulated,” said Grass.
The expert notes the BRICS countries account for 40 percent of the world’s population and around 23 percent of the world’s domestic product.
“In combination with the announcement of pricing oil in yuan, using a gold-backed futures contract in Shanghai, the establishment of the Asian Infrastructure Investment Bank and the New Development Bank, China is setting up an alternative to the post-Bretton Woods establishment. This is certainly a game changer,” said Grass.
Physically backed precious metals market spells the end of paper gold trade
The level of trust between BRICS countries can help them establish intragroup gold trading, which would be 100 percent physically backed.
“This will present a viable challenger that could over time lead to a break up of the current system since the West will likely still trade paper gold in the meantime,” Grass said.
According to London gold clearing statistics for 2016, the total trading volume in the London Over-the-Counter (OTC) gold market is estimated at the equivalent of 1.5 million tons of gold. The volume of 100oz gold futures on New York’s COMEX reached 57.5 million contracts during 2016 or 179,000 tonnes of gold, the analyst notes.
The amount of mined gold is much smaller
“If we now take into consideration that only approximately 180,000 tons of gold have actually been mined up to today the scam is just gigantic and obviously unsustainable. The paper scams in London and New York will either blow up when the paper price of gold drops to zero or when just a fraction of investors insists upon receiving physical gold in return,” Grass said.
The expert believes that with paper gold trading, the established gold exchanges could cease to exist sooner or later.
“They will likely become obsolete and lose their importance over time. Although one cannot predict exactly how fast this will happen, the trend is clear: OTC and COMEX are working toward their own destruction,” he said.
Gold prices could explode if trading were backed by physical precious metals
“It will definitely lead to higher prices for physical gold. Imagine if you could buy on COMEX and OTC gold at a much lower price and still have the option to sell it in Asia for a much higher price; this would kill the old paper scams immediately. Therefore, I would guess that both could come up with new restrictions that only cash settlements will be allowed to avoid this. We know for example that even today 99.96 percent of COMEX gold futures are settled in cash,” Grass wrote.
The final battle: Gold vs. US dollar
The analyst recollected the Heartland Theory of Halford Mackinder, a British geostrategist at the beginning of the 20th century who influenced the likes of Kissinger and Brzezinski. Following the theory, we will soon face a war between physical gold and the US dollar.
“As per my understanding, we are moving into the final phase, the battle between currencies – one that will be backed by a hard asset which was real money since time immemorial until 1971 and the other one, backed by promises that future generations will pay through debt, inflation and ever-rising taxation,” he said.
Getting away from fiat currencies will be good for gold
“I would like to conclude with a final thought from my friend Jayant Bandari: the combination of negative yields, massive political risks around the world, and any attempt to move away from traditional currencies will be positive for gold and will take it to the next level. Investing is very much linked with geopolitics – once you understand the big picture, it becomes apparent what you should invest in,” Grass told RT.