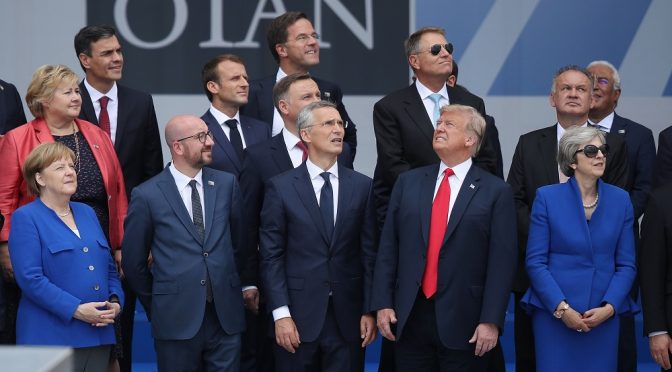 Okay, well, Trump did it again. Antagonizing allies. This time it was Germany that took the main hit, over the fact that it pays Russia billions of dollars for oil and gas while relying on the US for its defense … against Russia. And yes, that is a strange situation. But it’s by no means the only angle to the story. There are many more.
For one thing, The US has by far the largest military industry. So it makes a lot of money off the billions already spent by NATO partners on weaponry. Of course Raytheon, Boeing et al would like to see them spend more. But once they have done that, they would clamor for even more after.
At some point one must ask how much should really be spent. How much is enough, how much is necessary. The military-industrial complex (MIC) has every reason to make the threat posed by ‘enemies’ as big as they possibly can. So knowing that, we must take media reports on this threat with tons of salt.
And that is not easy. Because the MIC has great influence in politics and the media. But we can turn to some numbers. According to GlobalFirePower, the US in 2018 will spend $647 billion on its military, while Russia is to spend a full $600 billion less, at $47 billion. And the US Senate has already voted in a $82 billion boost recently.
There are other numbers out there that suggest Russia spends $60 billion, but even then. If Moscow spends just 10% of the US, and much less than that once all NATO members’ expenditure is included, how much of a threat can Russia realistically be to NATO?
Sure, I’ve said it before, Russia makes weapons to defend itself, while America makes them to make money, which makes the latter much less efficient, but it should be glaringly obvious that the Russia threat is being blown out of all proportions.

Problem with that is that European nations for some reason love playing the threat card as much as America does. After all, Britain, France and Germany have major weapons manufacturers, too. So they’re all stuck. The Baltic nations clamor for more US protection, so does Sweden, Merkel re-focused on Putin just days ago, the game must go on.
Another way to look at this is to note that UD GDP in 2017 according to the IMF was $19.3 trillion, while Russia’s was $1.5 trillion. NATO members Germany France, Britain, Italy and France all have substantially higher GDP than Russia as well. European Union GDP was $17.3 trillion in 2017.
If this economically weak Russia were really such a threat to NATO, they would be using their funds so much better and smarter than anyone else, we’d all better start waving white flags right now. And seek their help, because that sort of efficiency, in both economics and defense, would seem to be exactly what we need in our debt-ridden nations.
The solution to the problems Trump indicated this morning is not for Germany et al to spend more on NATO and their military in general, but for the US to spend less. Much less. Because the Russian threat is a hoax that serves the interests of the MIC, the politicians and the media.
And because America has much better purposes to spend its money on. And because we would all be a lot safer if this absurd theater were closed. To reiterate: developments in weapons technology, for instance hypersonic rocket systems make most other weapons systems obsolete. Which is obviously a big threat to the MIC.
Russia attacking NATO makes as much sense as NATO attacking Russia: none whatsoever. Unwinnable. Russia attacking Germany and other European countries, which buy its oil and gas, makes no sense because it would then lose those revenues. From that point of view, European dependence on Russian energy is even a peacemaker, because it benefits both sides.
Can any of the Russiagate things be true? Of course, Russia has ‘bad’ elements seeking to influence matters abroad. Just like the US does, and France, Britain, Germany, finish the list and color the pictures. How about the UK poisoning stories? That’s a really wild one. Russia had no reason to poison a long-lost double spy they themselves let go free years ago, not at a time when a successful World Cup beckoned.
342 diplomats expelled and risking the honored tradition of exchanging spies and double agents from time to time. Not in Moscow’s interest at all. Britain, though, had, and has, much to gain from the case. As long as its people, and its allies, remain gullible enough to swallow the poisoned narrative. Clue: both poisonings, if they are real, occurred mere miles from Porton Down, Britain’s main chemical weapons lab.
And c’mon, if Putin wants his country strong and independent, the last thing he would do is to risk his oil and gas contracts with Europe. They’re simply too important, economically and politically. Trump may want some of that action for the US, understandably, but for now US LNG can’t compete with Russian pipelines. Simple as that.
Let’s hope Trump and Putin can talk sense in 5 days. There’s a lot hanging on it. Let’s hope Trump gets his head out of NATO’s and the US and EU Deep State’s asses in time. There’s no America First or Make America Great Again to be found in those dark places. It’s time to clear the air and talk. America should always talk to Russia.
Funny thing is, the more sanctions are declared on Russia, the stronger it becomes, because it has to learn and adapt to self-sufficiency. Want to weaken Russia? Make it depend on your trade with it, as opposed to cut off that trade. Well, too late now, they won’t trust another western voice anymore for many years. And we’re too weak to fight them. Not that we should want to anyway.
We’re all captive to people who want us to believe we’re still stuck in the last century, because that is their over-luxurious meal ticket. But it’s all imaginary, it’s an entirely made-up narrative. NATO is a con game.
The original source of this article is The Automatic Earth. Copyright © Raúl Ilargi Meijer, The Automatic Earth, 2018.

6 thoughts on “NATO is A Con Game”