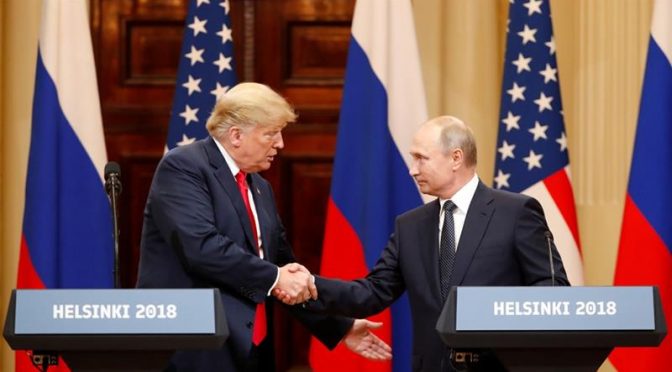 The Deep State Old Media were not able to pin down both leaders during their presser yesterday. This is a positive sign that both Putin and Trump are decisive in their resolve to reestablish a peaceful cooperation for both countries, which is really what the world needs today.

Here’s the key statements made which confirm the close coordination between the two leaders even prior to this summit.


For Trump to admit that the US and Russia possess 90% of nuclear weapons on the planet, thereby acknowledging its insanity because the US could not fly each one of them anyway without being intercepted and neutralized either by Earth-based countermeasures or off-world, suggests that there will be an honest effort to shift away from war-based economy into making this planet conform to the Space Age of infinite frontiers from hereon, as hinted thereto during Trump’s inaugural address.
It is, of course, the American media that is still the problem, including the somewhat pro-Trump Fox News, where Putin is not allowed to enlighten its audience.


And it’s not just the media…

Where are our military folks ? The Commander in Chief is in the hands of our enemy! https://t.co/3eF7OLKEdN

That’s a House Democrat’s call to a US miltiary coup against Trump after the former CIA director John Brennan called US President Donald Trump’s joint news conference with Russian President Vladimir Putin “treasonous.”
Assuming that this event is just one of those vaudeville shows to fool the uninitiated, then we are indeed cursed and only a real grassroots effort will rectify the world as it is. But are you ready and willing to put the bill for such a scenario?
The world is moving in for the better because the people wills it. The Deep State will do all it can to preserve its privileged position, but if we continue to enlighten ourselves and do concrete actions that would ultimately undermine its power, then we’ve won.
It’s what you do today that will make a lot of difference tomorrow. We may not live to see that day happening, but the next generation deserves none of what we’ve experienced most of our lives. So, the best time to do a little something is now when we can still coordinate our actions against a common enemy.