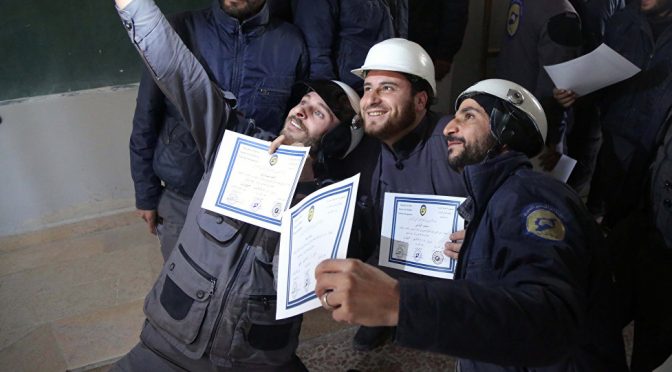 The White Helmets have been shown to effectively be the same organization as terror group al-Nusra Front and have been caught on film aiding al-Nusra terrorists execute Syrian civilians. It is hard to imagine any Westerner who would want the White Helmets as neighbors.

Israel evacuated nearly 800 White Helmets personnel and their families from the southwest of Syria to Jordan, where they will later be transported to Great Britan, Canada, and Germany, Bild reported.
The evacuation reportedly began at 9:30 p.m. local time on Saturday evening, when the United Nations assisted the White Helmets personnel to cross safely into the contested Syria’s region of Golan Heights.
According to the Bild, the evacuation was negotiated between the United States, Russia and the Syrian authorities.
On Monday, the CNN broadcaster reported, citing sources, that the evacuation of about 1,000 White Helmets’ members and their families from Syria was discussed during the NATO summit last week amid the progress the Syrian government is making in regaining control over the rebel-controlled regions.
The White Helmets volunteer group considers itself a non-governmental organization aimed at protecting Syrian civilians. However, Syria’s President Bashar Assad says that the group is affiliated with the al-Qaeda terrorist organization.
Moscow and Damascus have accused the White Helmets of helping to stage the chemical attack in Eastern Ghouta’s Douma on April 7 that prompted the United States, the United Kingdom and France to launch more than 100 missiles on multiple targets in Syria one week later.

Western Governments Seek to Evacuate White Helmets From Syria, Resettle Them in Canada

By Whitney Webb
Throughout much of the Syrian conflict, the exploits of the rescue organization that calls itself the Syrian Civil Defense, better known to Western media as the White Helmets, have been a source of constant controversy. Much of this controversy stems from their multi-million dollar funding from Western governments and their documented collaboration with terrorist groups such as al-Qaeda, all while purporting to be a local “first responder” organization with a neutral stance regarding the country’s conflict.
Yet now, following the recent success of the Syrian government’s campaign to rid southern Syria of both radical jihadist and foreign influence, the same Western governments that have long funded the White Helmets are seeking to evacuate their assets and resettle them abroad.
According to a report recently published in CBS News, several Western countries that have provided funding for the group – such as the Netherlands, the U.K., Germany and France – are now “scrambling” to evacuate the estimated 1,000 White Helmets and their families, claiming that they are “in danger of assassination” and “now in need of rescuing themselves.”
Several of these countries had brought up the issue with U.S. President Donald Trump at last week’s NATO summit, per CBS’ sources. However, the Trump administration – which recently restored $6.6 million in funding for the White Helmets — declined to comment on rescue efforts for the group, but did voice its concern that the White Helmets and related groups could face “reprisals” from the Syrian government.
The report asserted that, of all the leaders who had discussed the White Helmets at the recent NATO summit, U.K. Prime Minister Theresa May was the most adamant, as she also brought up the issue during her personal meeting with Trump over the weekend in London. May’s concern is unsurprising, given that the U.K. has spent more than any other government in funding the White Helmets, spending more than $80 million from the time the group was founded in 2013 through 2016. Furthermore, the group itself was founded by a former U.K. military intelligence officer turned mercenary, James Le Mesurier, which suggests that the U.K.’s connection to the group may go deeper than mere funding.
Western diplomats who spoke to CBS stated that, while no formal plan has yet been adopted, “dozens of ground escape routes” that would lead White Helmets out of Syria are currently being explored. However, if that method fails, those diplomats asserted that Russia would have to approve an aerial escape, though they openly doubted whether Russia could be trusted to aid such an effort.
Terrorists as neighbors?
Another area of confusion for those governments seeking to extract White Helmet members from Syria is where they should be resettled. While the Trump administration’s travel ban excludes the U.S., given that the ban prohibits the entry of Syrian nationals, Canada was named by CBS as a top possibility for a White Helmet “safe haven.” The report also asserted that Jordan and Israel would also likely assist such efforts.
However, resettlement may be a problem, not so much for the White Helmets as for Canadians, or the citizens of whatever nation would host the evacuees. This is because the White Helmets have been shown on several occasions to effectively be the same organization as terror group al-Nusra Front and have been caught on film aiding al-Nusra terrorists execute Syrian civilians. It is hard to imagine any Westerner who would want the White Helmets as neighbors.
Evacuation phase
Ultimately, the fact that the group’s foreign funders are acting to evacuate White Helmet operatives from Syria makes it clear that the Syrian government, thanks to its own efforts and those of its allies, clearly has the upper hand in now seven-year-long conflict. A U.S. official speaking to CBS all but confirmed this, stating:
This effort says we are in the evacuation phase. It is an admission that the regime is going to regain control of the country and the White Helmets can’t remain.”
Though this could well be the final chapter for the Syrian White Helmets, such reports should be taken with a grain of salt, as they have been used in the past to generate sympathy among the Western public in order to justify increased support for the group. For instance, a prior CBS report had spoken of the Trump administration’s “funding freeze” for the White Helmets and how this endangered the group’s activities. However, as noted above, just two months later the U.S. restored funding for the group to the tune of $6.6 million.
Thus, while the group may be finished in Syria’s south, its presence along with its activities in service to its Western paymasters is likely to continue in other areas of Syria that are controlled by terrorists and foreign occupiers, despite assertions of the group’s imminent evacuation.
Whitney Webb is a staff writer for MintPress News and a contributor to Ben Swann’s Truth in Media. Her work has appeared on Global Research, the Ron Paul Institute and 21st Century Wire, among others. She has also made radio and TV appearances on RT and Sputnik. She currently lives with her family in southern Chile.
The original source of this article is MintPress News.