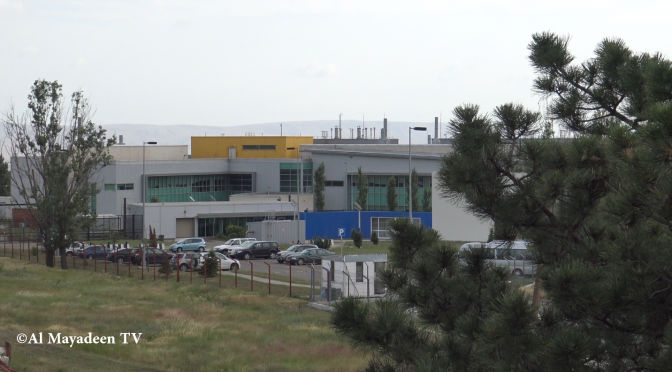 Instead of investing in the health of its own citizens the US government has spent $161 million of US taxpayer money on the Lugar Center in Tbilisi for research on deadly diseases and biting insects abroad. (©Al Mayadeen TV)

The secret facility is located just 17 km from the US Vaziani military airbase in Georgia’s capital Tbilisi.

I am being filmed while talking to local residents on the street near the Pentagon biolaboratory and I want to know why the security guards are filming me. (©Al Mayadeen TV)

The security guards warn me that if I do not comply, show my passport and leave this place, I will be arrested. My official request to the Lugar Center for access to the facility and for interviews has also been rejected.

However, I go back at night when the laboratory is seemingly still working. No matter how far the distance the air is laden with the smell of chemicals. This smell coming from the Lugar Center at night is blown by the wind to the residential area.

Local residents from the Alexeevka neighbourhood, where the laboratory is located, complain that dangerous chemicals are being secretly burnt at night and that hazardous waste is being emptied into the nearby river through the laboratory’s pipes.

A diplomatic car with US Embassy registration plates can be seen in the car park of the Lugar Center at night when the laboratory is seemingly still working. (©Al Mayadeen TV)

A few hours later, the diplomatic vehicle is still in the car park of the Lugar Center. There is a strong smell of chemicals in the area. (©Al Mayadeen TV)

Locals complain of constant headaches, nausea, high blood pressure and dizziness when chemicals are being burnt at night in the laboratory which is just a couple of hundred meters from their homes.

“There is a smoke – black, red, green at night or especially early in the morning at around 3, 4 a.m. Even the hens have died. They put a big pipe underground and connected it to the drains. This smell comes from there. It smells like rotten eggs and decaying hay. The smell is so bad and is spread in different directions by the wind”, says Eteri Gogitidze who lives in a block of flats next to the laboratory.

Albert Nurbekyan who lives about 300 m from the laboratory shows the four chimneys from the Lugar Center which release smoke at night. (©Al Mayadeen TV)

“Sometimes the wind spreads a smell of rotten eggs. Once I woke up early in the morning and noticed violet smoke coming from the laboratory. At night time they let the smoke out so that people don’t see. Why at night, what are they hiding from us?, he asks and then provides another worrying fact: “There are big blue plastic pipes along this street (from the laboratory) and from where everything goes to the river which is 3-4 km away. Not only do they pollute our air, but they also poison our water.”

Neighbours recall a tragic incident involving four Filipinos who worked at the Lugar Center. Two of the foreigners died of an alleged gas poisoning in their rented flat in block 44 of the Alexeevka Settlement.

“The first time when they called the Emergency service we were told that they had food poisoning from fish. But the second time when the ambulance came there was foam coming out of their mouths. They were shouting: “Help, Help!” When they passed away, they took them away and covered it all up. It all happened here”, Albert Nurbekyan shows the sealed off flat where the foreign scientists died.

Another witness, Elvira Ratiani who lived next door witnessed the foreigners die before her eyes.

“They were my neighbors, we lived on the same floor, and once they were poisoned, and asked us to call the Emergency service. We phoned and the Emergency service saved them. They said it was probably fish poisoning. The second time, they knocked on the door and again asked for help. There were four Filipinos, two of them were saved, but the other two died”, recalls Elvira Ratiani who lives in the fatal block 44 of the Alexeevka Settlement right next to the laboratory.

Internal documents and correspondence between the Ministry of Health of Georgia and the US Embassy to Tbilisi show what experiments have been conducted at the Lugar Center.

Leaked documents reveal that the US Embassy to Tbilisi transports pathogens, as well as frozen human blood, as diplomatic cargo.