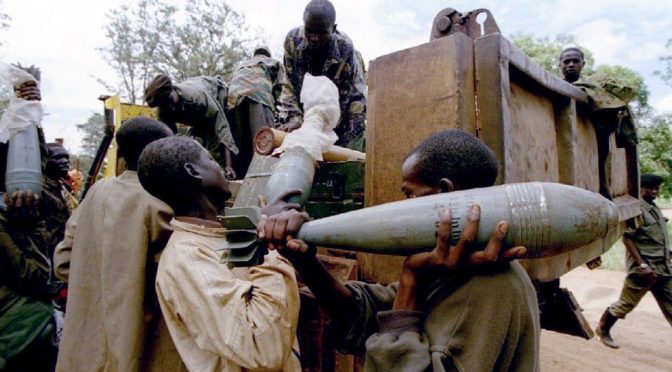 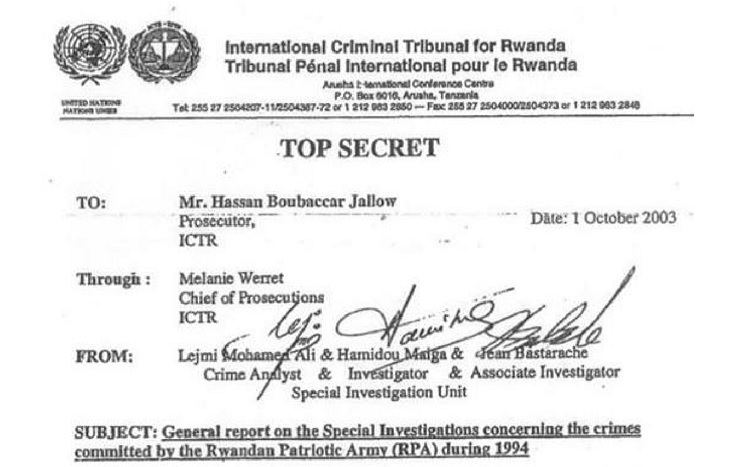 The document, with the subject reference “General Report on the Special Investigations concerning the crimes committed by the Rwanda Patriotic Army (RPA) during 1994’ was sent to the then Prosecutor Hassan Jallow by three members of the Prosecution Special Investigations Unit. It provides to the Prosecutor the evidence they had gathered that the RPA had committed massacres of thousands of Hutus in various places across Rwanda, for example, Byumba, Kabgayi, Rambara, Gitarama, and Butare, as well as the murder of three Catholic bishops and nine other priests at a church. The circumstances set out in the report confirm Gersony’s Report of similar massacres and also confirms witness testimony we heard during the trials that the RPA forces had infiltrated men into civilian barricades to kill people in order to pin the crimes on the Rwandan government forces and the youth group known as the interahamwe.
Finally they provide, once again, further evidence that the RPA did shoot down the presidential plane, confirming the findings of Michael Hourigan in 1997 detailed above and which Louise Arbour had ordered kept secret, confirming the findings of the French report and confirming the evidence we filed at trial to the same effect, including a radio intercept from Kagame to his forces, the day after the plane was hit, celebrating the downing of the plane as a successful operation. It is a very important and damning report. Kept secret. One wonders how many more secret reports they have.
There is not space here to detail the horrific crimes set out in the document, or to relate to you the evidence we heard at the trials-what one Hutu refugee, speaking of the hunting down of Hutu refugees in the Congo by the RPF forces, assisted by spotter planes with US Air Force markings, called the “genocide with no name,” so I provide just a few examples from this document to give readers the picture. On page 28, in reference to the capital city of Rwanda, Kigali, it states:
“Camp Kanombe (a government military base) at the end of May 1994. When the RPA captured Kanombe, approximately 1500 civilians had taken refuge in the camp. They were all massacred by the RPA.’
‘Kanombe Airport, at the end of May 1994, approximately 200 to 300 civilians of all ages were brought …and executed.”
“Masaka, Kanombe commune, end of July 1994, – in 5 days approximately 6,000 women children and men were executed with their arms tied behind their back at the elbow.
“Camp Kami, during the capture of the camp by the RPA thousands of civilians who had taken refuge there were executed”
The picture is clear. Yet, to this date not a single member of the RPF or their western allies has been charged for their responsibility for these crimes and Paul Kagame, who ordered these killings, is hosted with smiles by leaders from Canada to France to China. The prosecutors who decided to protect these war criminals, and who, by withholding evidence of what really happened, obstructed justice, conspired to frame up those standing accused before the tribunal, turned international justice into a travesty, and gave these criminals immunity from prosecution and encouragement to commit more crimes have moved on to lucrative positions. Fatima Bensouda, one of those former ICTR prosecutors, is now the prosecutor of the International Criminal Court.
Where is the justice for the 6,000 men, women and children murdered at Masaka? Where is the hue and cry for the head of Paul Kagame as there was for the head of President Milosevic and the allegations he faced or as President Aassad of Syria faces? Where is the hue and cry for the head of General Dallaire, or for Louise Arbour, who condoned these crimes, as there was for General Mladic regarding the allegations about Srebrenica? There is none. Instead they are made celebrities, for we live a world in which criminals have seized hold of morality and justice and hanged them from a tree.
Christopher Black is an international criminal lawyer based in Toronto. He is known for a number of high-profile war crimes cases and recently published his novel “Beneath the Clouds. He writes essays on international law, politics and world events, especially for the online magazine “New Eastern Outlook.”