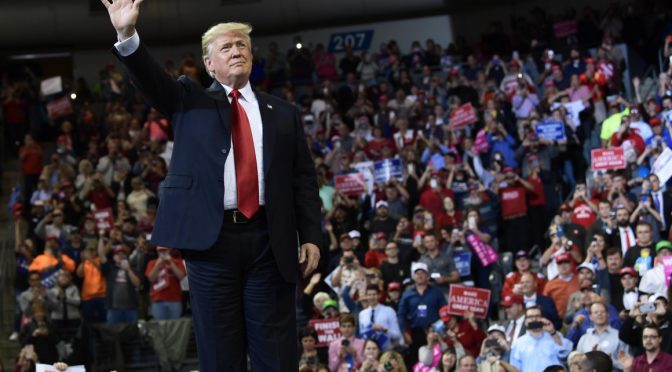 President Donald Trump is fully deployed to assure that the “Impeachment Party” — once known as the Democratic Party — is denied their effort to take over the Congress and launch an impeachment. He has held 12 rallies across the country in support of Republican candidates, repeating everywhere that a vote for Democrats this year is a vote against himself.
He plans to hold 10 more rallies in the final days preceding the election on Nov. 6. Although he seldom engaged the press in his first two years, in the past three weeks he has held numerous press conferences and interviews, fully confident and determined in his role as President. The LaRouchePAC-sponsored Independent Congressional candidacies in Texas and South Dakota of Kesha Rogers and Ron Wieczorek are rallying people around the country, regardless of party affiliation, to defend the nation against the British-orchestrated coup attempt, and organizing Americans to back Trump’s intention to establish peace and friendship with Russia and China, restore American System economic policies in the U.S., while calling on Trump to join in the new paradigm for global development represented by the Belt and Road Initiative.
The British and their assets in the U.S. are not pleased. In the past week we have seen the “caravan” of people from Honduras and Guatemala, openly mobilized and financed by George Soros’s NGOs, being driven toward the U.S. border, trying to force a showdown that they believe will undermine Trump’s resolve and public support. Even the Presidents of the these two impoverished nations have denounced the operation as a destabilization of their own countries, and created a “Safe Return” fund to entice the marchers back to their homelands. Mexican President-elect Andrés Manuel López Obrador has offered jobs and work visas to the marchers if they would stay in Mexico.
And now we have the mail-bomb operation, with primitive pipe-bombs mailed to Obama, Hillary Clinton, CNN and others — even George Soros himself — although they may have been so poorly constructed that they could not explode. CNN President Jeff Zucker immediately blamed Trump and his press spokesperson Sarah Sanders, claiming that their attacks on the press constitute an invitation for terrorist assassinations! Trump, in fact, strongly denounced the criminal acts and swore to catch the perpetrators. The {Washington Post} headlined an article: “Amid Incendiary Remarks, Targets of Trump’s Words Become Targets of Bombs.” They also denounced those who questioned the bombs as a possible “false-flag” operation, of the sort now widely recognized due to the fake chemical weapons attacks in Syria by the terrorist White Helmets.
The New York Times went so far as to publish a short story by a British pulp novelist about a Russian hit-man, with help from the U.S. Secret Service, assassinating President Trump.
These actions have a destabilizing purpose, but there is a process underway in humanity at large which can not easily be stopped. The British people have rejected the EU dictatorship, and now the same sentiment has led to a new government in Italy which is putting the health and livelihood of their citizens ahead of the unelected Brussels oligarchs. The elections of Rodrigo Duterte in the Philippines, and Donald Trump in the U.S.A. demonstrate the old Abe Lincoln saying: You can’t fool all of the people all of the time.
Most importantly, there is now more than one choice facing the citizens of the world. The “one game in town” era of IMF dictates, the “Washington Consensus,” is dead, although the dinosaurs have so far failed to concede their demise. The Belt and Road is being embraced across Asia, Africa and Ibero-America, and increasingly in both Eastern and Western Europe. This is what the Lords of the City of London and Wall Street fear most. When they heard this past week that Trump plans to meet Vladimir Putin in Paris immediately after the election, and that he is also to meet with Xi Jinping at the end of November in Argentina, all the King’s horses and all the King’s men have been deployed to prevent this affront to the British Empire’s division of the world by the upstart President of the breakaway colony across the Atlantic. But Humpty Dumpty is about to take a great fall.
It is the power of ideas which has created this mass strike ferment around the world, ideas conceived and set in motion by Lyndon LaRouche over the past half-century, finding resonance in the minds of creative people in nations around the world. These ideas have drawn on the rich classical culture of Plato and Schiller, the Confucian view of a harmonious society, the American concept of the general welfare, the scientific spark of Krafft Ehricke’s Extraterrestrial Imperative, among others. It is these universal ideas which must guide us in this moment of decision for the fate of mankind.

19 thoughts on “Panic Among Oligarchs, Trump May Turn the Election”